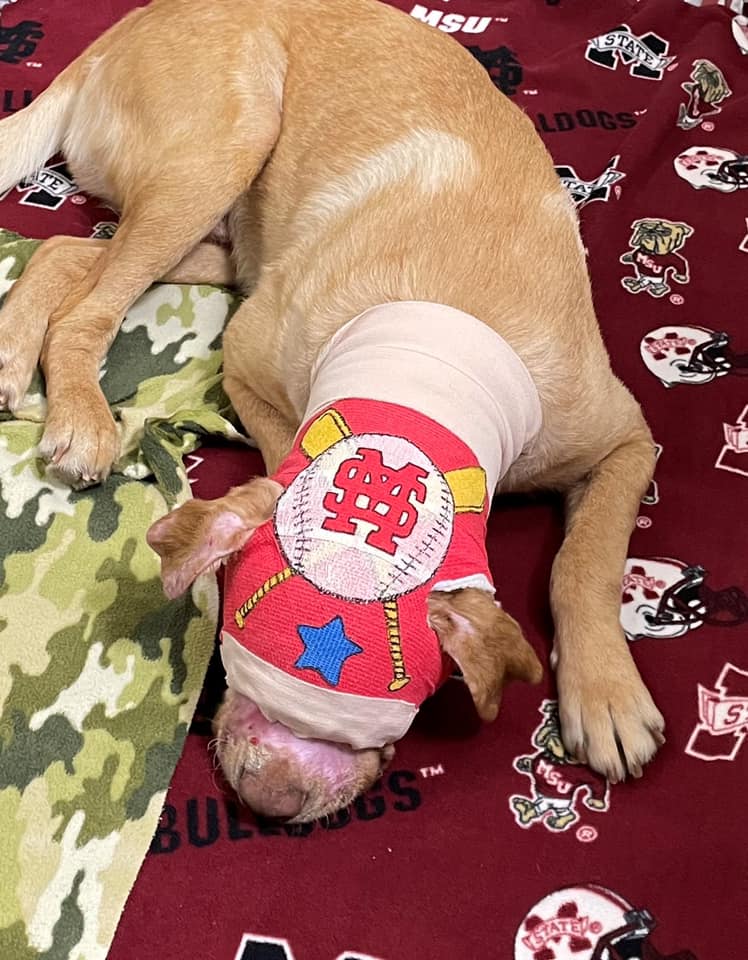 Do you remember the story of Buddy?  In April, he was found dazed and in shock in East Tate County. He had an extension cord twisted around his neck and his face had been set on fire.

Since then, Buddy has been in the loving care of Mississippi State University College of Veterinary Medicine. On Monday, they provided the following update on Buddy’s courageous journey.

The dog that everyone has been rooting for is cheering on the #Omadawgs from Starkville!

Buddy has been in our care for about nine weeks now. In that time, he has received 5 Kerecis Vet Codfish skin grafts. His face is healing well! The main part left to heal is the bridge of his nose between his eyes – basically the center of the wounded area. Tension from the healing process has been affecting how his eyelids close, so his team has been performing small cosmetic releasing incisions and tarsorrhaphy periodically to release the tension on his eyelids and help keep them closing properly as he heals. Some hair is regrowing around his eyelids and at the edges of the burned area. Whiskers are coming in as well!

“So much healing has already taken place. I’m hoping to be able to release him by the end of July/early August, but that will depend on how long it takes for this last area to heal. He continues to heal rapidly, but it’s a large area to cover,” said Dr. Betsy Swanson.

Buddy continues to be a happy and loving dog! He loves attention, walks, training, head rubs and back scratches. His care team took him out for a photo shoot on Friday and he was hamming it up for the camera! He really seemed to be enjoying himself!