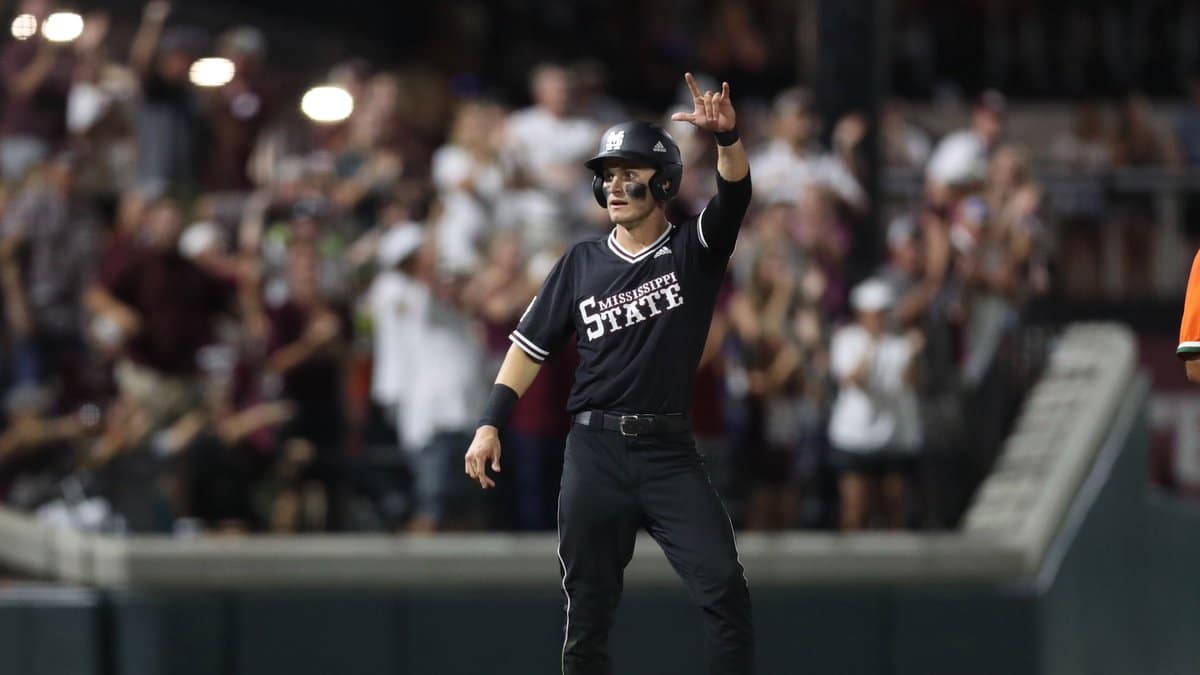 For the fourth season in a row, and with its fourth different head coach in that time period, Mississippi State is headed to the Super Regional round of the NCAA Tournament.

The Bulldogs handed Miami a 5-2 loss in the Regional Championship game, finishing up a perfect weekend and punching their ticket to advance in postseason play. Peyton Plumlee gave State a solid five innings to get the win, and Jake Mangum finally broke out of his slump with a 3-4 night with a couple of runs scored. State improves to 49-13, and will await the winner of the Stanford Regional, who will travel to Starkville for the next round.

We all knew it was just a matter of time before Jake Mangum started hitting again, and it was a little nubber that traveled maybe 10 feet from the plate that he beat out for an infield single that sparked the fire. After that, a solid single and a double roped into center capped his night. When you combine that with Jordan Westburg going 2-4 with a couple of RBI that padded State’s lead in the 8th, you get back to the kind of production that had MSU leading the SEC in hitting most of the season. After the SEC Tournament had many questioning the Bulldog bats, MSU puts up 11, 6, and 5 runs in the three regional games to advance.

ALL MY ROWDEY FRIENDS

The full All-Regional team. If ballots didn’t have to be in during the 8th inning, I’m pretty confident Cole Gordon would’ve gotten the nod over Brian Van Belle. pic.twitter.com/xqEqNFSBdy

Rowdey Jordan has been one of MSU’s hottest hitters over the past month, and he was locked in this weekend. Jordan put together a 7-13 series, with 5 RBI. Jordan found his batting average above .300 this weekend for the first time all season, and he played a solid outfield for the Bulldogs. All of that was enough to secure his place on the All-Tournament team with five of his teams, and to bring home Regional MVP honors. With Jordan nudging over .300, the starting lineup is now .290 or above 1-9.

Four straight Super Regional appearances is an incredible accomplishment, but when you take into account the flux the Mississippi State program has been in since John Cohen moved to the athletic director’s office, it is really beyond comprehension. This team may be the best of the bunch, closing in on 50 wins after an incredibly consistent regular season. Now the task for the Bulldogs is to make it back to back trips to the College World Series for the first time since 1997-98.

Mississippi State awaits the winner of the Stanford Regional, where as of this writing the Cardinal are pushing for a Monday elimination game with Fresno State. I asked Coach Chris Lemonis if he expected true freshman hurler JT Ginn back in the rotation after he left Friday’s game early with arm soreness, but Lemonis said it was too early to make that decision. Game times will be announced after the completion of the regional round, and it seems a safe bet that should Stanford and Fresno State have to play on Monday, the Starkville Super Regional will get a Saturday start.