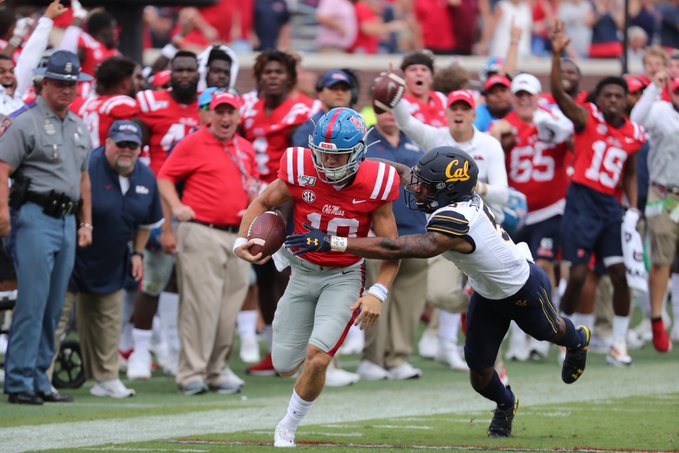 Oxford – Ole Miss has to answer some tough questions after Cal issued it a gut punch in a 28-20 defeat on Saturday to drop the Rebels to 2-2 on the season.

The controversial, penultimate play is merely a short-term diversion from the underlying issues that plague a football team with an uphill battle ahead and a rapidly deteriorating postseason path.

Yes, the last play should’ve been reviewed. Yes, there are angles where it looked like Elijah Moore caught Johny Rhys Plumlee pass over the goal line for a touchdown that would’ve given Ole Miss a chance to tie the game with a two point conversion.

Luke was not given an explanation as to why the play was not reviewed and did not seem to think he will get one in the near future.

No, a review would not have guaranteed a reversal in the ruling. It may have produced conclusive evidence. It also may have remained unclear. The 59 minutes and 45 seconds of football played leading up to that final sequence should raise more concern for Ole Miss.

The secondary was exposed. Cal quarterback Chase Garbers — a man limited in throwing ability and viewed as a prototypical game manager who had nine completions in a win over North Texas last week — torched the Rebels to the tune of 357 yards passing with four touchdowns and an Interception. The four scores are a career high for the senior signal caller. He’d never thrown for more than 238 yards in a game. Garbers entered the contest with 420 yards passing for the year on 98 completions. He nearly doubled his season yardage total in a single game and the 25 completions is a career high as well.

“We just weren’t very good at it today,” Mike MacIntyre said. “We definitely didn’t cover as well as we needed to today. We have to keep working at it.”

The Rebels were unable to generate a consistent pass rush. It’s a two-way street. Macintyre had his hands tied, unable to put pressure on Garbers without blitzing and hesitant to blitz because of the unit’s coverage woes.

Garbers ran the football 12 times as well and eluded pressure well when it did come, even with the Rebels’ four sacks. Of the Bears’ 433 yards of offense, 373 came via the passing game. Cal rushed for just 60 yards on 33 attempts. The Bears averaged 1.8 yards per carry. It didn’t matter. They won the football game via the arm of a limited quarterback.

“We blitzed a few times and they still got us,” MacIntyre said. “We just have to cover better back there. We have to do a better job with those guys and we have t compete for the ball better.”

Ole Miss was putrid on third down. Cal converted 6-of-12 third down conversions. It was 4-of-6 in 3rd-and-nine or longer. The Rebels couldn’t get off the field.

“Getting off the field on third down,” Luke said. “That was the story of the game. We couldn’t get pressure with our front four either. We had too much inconsistency to beat a top-25 team.”

Conversely, Ole Miss sputtered offensively down near the goal line. Six times the Rebels reached the red zone. They kicked two field goals, scored two touchdowns and came up empty twice. It should be noted one of those was the final drive, but the point still remains.

Cal scored touchdowns on all three of its red zone trips. The Bears had the game’s lone turnover in the second quarter. Freshman corner Deantre Prince jumped a route and picked off Garbers. Ole Mis began the ensuing drive at the Cal 35 yard line and only recorded three points.

“We didn’t execute down there,” Rich Rodriguez said. “I think watching this film is going to make us miserable because there were a lot of opportunities out there.”

Matt Corral was good for a half. He was 16-of-23 for 168 yards. But even with the high-completion rate, his accuracy was erratic. He missed two throws on a drive in the second quarter that resulted in a field goal instead of a touchdown. Corral was so bothered by the mistakes, he fired throws to Grant Tisdale on the sideline, writhing in anger and firing with high velocity. Whether he was trying to find the accuracy that has eluded him at times this season or simply was releasing frustration, Corral knew he let opportunities slip away. A disastrous third quarter loomed.

Corral left the game in the fourth quarter with a rib injury. Plumlee ignited an offense that had gone dormant. He broke a 47-yard run on his first snap. Jerrion Ealy scored from 15 yards out a play later in his only touch of the second half. Plumlee went 7-of-7 for 82 yards. Trailing 28-20 with 2:45 remaining in the ballgame, he marched the offense 89 yards down to the goal line with a chance to tie the game.

Plumlee needed one more yard to lead-back-to-back touchdown drives. Time ran out on the true freshman, but he played admirably and made the Rebels’ quarterback picture a bit more blurry.

Rodriguez was not interested in sparking a quarterback controversy. Matt Luke didn’t rule anything out. There are a lot of factors in play, including the severity of Corral’s injury.

But even if Corral is healthy, one would think Plumlee would get a look given the stark contrast in the two performances in the second half. Plumlee’s insertion into the game prompted the most excitement of the day from the fans in attendance. It also produced pretty good results.

“We will evaluate everything,” Luke said. “But there is a lot that goes into that. How healthy is Matt? Can he run the ball with those ribs? We have to get in tomorrow, evaluate Matt and go from there.”

Look down the rest of Ole Miss’ schedule. Alabama, LSU and Auburn loom. Texas A&M does too. Where do the wins come from? It’s hard to peg four. Hell, it’s hard to peg three. This program going back to the postseason appears like a long shot after this defeat. Ole Miss needed to be 3-1 through four games to feel good about its chances of doing that. This crushing defeat dropped the Rebels below that threshold.

Whether it be the quarterback uncertainty, the red zone woes, the kicking inaccuracies or the incompetence in pass coverage, the Rebels didn’t play well enough to beat a ranked team at home. Tough questions lie a head for a team whose postseason chances are shrinking with every loss.

“It’s a tough loss,” Luke said. “We fought our hearts out but made too many mistakes to win. Just too much inconsistency.”