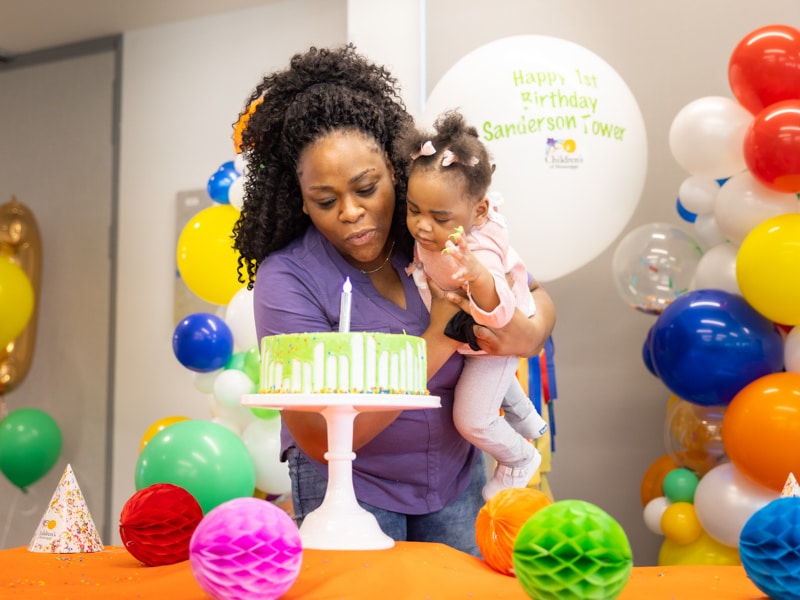 Jessica Carter of Jackson and daughter Lyndsey Lee blow out the birthday candle for the Kathy and Joe Sanderson Tower at Children's of Mississippi. (Image courtesy of UMMC)

Image above: Jessica Carter of Jackson and daughter Lyndsey Lee blow out the birthday candle for the Kathy and Joe Sanderson Tower at Children’s of Mississippi. (Image courtesy of UMMC)

Children’s of Mississippi celebrated the first birthday of the Kathy and Joe Sanderson Tower with cupcakes, balloons and videotaped cheers from some of the many patients it’s helped.

“This has been the dream of so many people for so long,” said Dr. LouAnn Woodward, vice chancellor for health affairs at the University of Mississippi Medical Center and dean of the School of Medicine. “It’s such a special place. Already in just one year, we’ve taken care of thousands of patients here. For me, the Kathy and Joe Sanderson Tower is everything I imagined and everything I dreamed. …  It is just fantastic, and it is possible because of Joe and Kathy Sanderson and their family and all the people who contributed and worked so hard to make this a reality.”

Joe Sanderson, who chairs the Campaign for Children’s of Mississippi with his wife, Kathy, said the children’s hospital brings care closer to home for families in the state.

“I think about a child and a family, coming to this hospital, and when they come, it’s under dire, serious circumstances,” he said. “They’ve been referred to this hospital because a local pediatrician or physician can’t deal with what that child has, whether it’s a heart condition, cancer or something else. I know those parents are suffering from fear. … And then a doctor sees them, and the doctor gives them hope.”

“Our hearts are full of gratitude for the wonderful medical staff,” said Kathy Sanderson.

In 2016, the Sandersons launched the Campaign for Children’s of Mississippi, a philanthropic drive to help pay for the expansion, with a $10 million personal donation. The ongoing capital campaign has raised more than 90 percent of its $100 million goal.

Dr. Mary Taylor, Suzan B. Thames Chair and professor of pediatrics, thanked the Sandersons for their leadership in the expansion, which is a complement to the Batson Tower, named for UMMC’s first pediatrics chair, Dr. Blair E. Batson.

Together, the two towers plus Children’s of Mississippi specialty clinics around the state serve all Mississippi’s children, she said.

Dr. Jennifer Hong, associate chief medical officer of Children’s of Mississippi and a pediatric critical care physician, was among those who planned the Sanderson Tower.

The pediatric intensive care rooms inside the tower, she said, “are a home away from home for families who are experiencing some of the scariest events of their lives.”

The larger tower provides Children’s of Mississippi room to grow “to further the mission of providing world-class care to Mississippi’s children.”

Lyndsey Lee Carter of Jackson, among the first patients to move into the Sanderson Tower’s NICU, blew out a birthday candle with the help of her mother, Jessica Carter, to cap the celebration.

Now a healthy toddler, Lyndsey Lee started life as a 1-pound, 3-ounce micro-preemie. She was a NICU patient for nearly seven months. When Lyndsey Lee was moved into the Sanderson Tower, her mother could stay with her for the first time.

Lyndsey Lee will be celebrating her first anniversary of coming home from the NICU later this month, Carter said, “thanks to the care she received here.”

Children’s of Mississippi has the only Level IV NICU in the state, offering the highest level of care in its 88 private rooms.

“It is amazing the difference in the Sanderson Tower,” said NICU nurse educator Becky Harrison. “We have so many families who now have the opportunity to stay with their children. They never had that before. Now the parents are able to get so much more involved.”

Next to the Sanderson Tower is a 517-space parking garage with a covered walkway leading to the children’s hospital.

“This past year has been one of growth and advancements in our care,” said Children’s of Mississippi CEO Guy Giesecke, “and in large part, that’s due to the new tower. From providing services in our outreach clinics to partnering with other hospitals and extending our specialty care to patients around the state, Children’s of Mississippi is providing more access to care. … Our future’s brighter than it’s ever been, and we have Joe and Kathy Sanderson and all our donors to thank for that.”