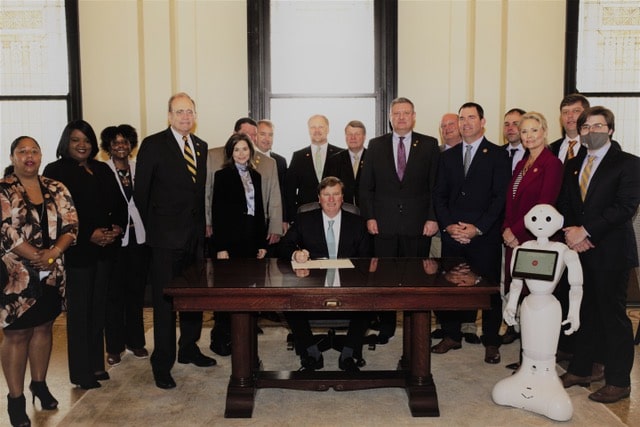 As part of the ongoing effort to prepare Mississippi students for the jobs of the future, a new bill signed by Governor Tate Reeves will place a computer science curriculum into all K-12 classrooms across the state.

With backing from C Spire, the ‘Mississippi Computer Science and Cyber Education Equality Act’ will lead to the implementation of the curriculum in all 884 K-12 public and charter schools by 2025.

Authored by Rep. Kevin Felsher, the bill was overwhelmingly approved by the House and Senate before being signed by the governor.

“We’ve made great progress in educating and informing the public on the importance of getting more rigorous computer science education in all of our schools so that students have the knowledge, skills and abilities to compete for the best jobs in the new 21st-century digital economy,” Governor Reeves said.

Identifying a need in the workforce, C Spire explains that workers with a background in computer science are in high demand and short supply in Mississippi. Employers currently have over 1,475 unfilled jobs due to the serious shortage of trained, qualified IT and computing workers. The average starting salary is almost double the statewide average.

“Getting computer science in all Mississippi classrooms represents a tremendous opportunity to give our young people exposure to the fundamentals necessary for their future success in the workforce,” C Spire CEO Hu Meena said.

As it stands, between 48-55% of high schools teach computer science in some form. In terms of the cost to implement the curriculum in the remainder of Mississippi schools, Chris Champion, Vice President of Government Relations for C Spire, said back in January that he hopes to see the legislature allocate around $2 million per year for the program’s operation. Teacher training will be the largest expense and, C Spire recently committed $1 million for that purpose along with the program’s implementation.

This effort follows a significant investment into expanding broadband capabilities in Mississippi in the midst of the pandemic.

The Senate did amend the bill to include a section that extends the repealer on a law that requires schools to implement an “abstinence-only or abstinence-plus education into its curriculum.”

Mississippi man shares his love of space through art