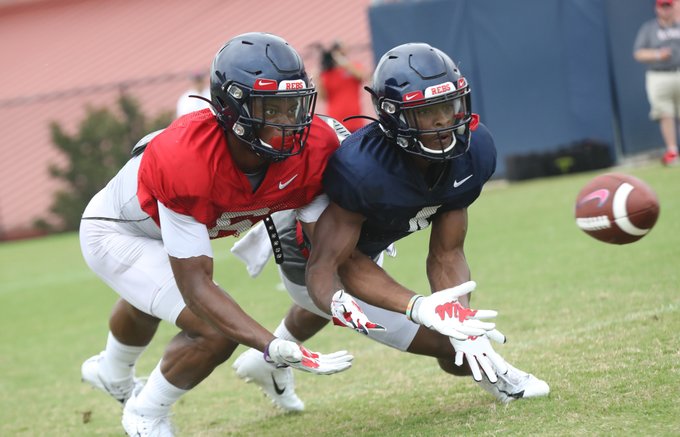 Ole Miss had its first scrimmage of fall camp over the weekend, a closed event following the program’s annual Meet the Rebels Day. Redshirt freshman quarterback Matt Corral and head coach Matt Luke said there were some positives from the scrimmage but both called for more consistency, a common refrain from a mid-August scrimmage. The scrimmage was roughly 100 plays.

—  Corral was pleased with a few things he saw from the offense but thinks the Rebels have room to improve with regards to the pace at which they operate. The tempo was not at the level that new offensive coordinator Rich Rodriguez  demands.

“Getting the calls as soon as we have the breakaway play and getting back on the ball knowing what we are supposed to do before even thinking about it, so it is more like a reaction,” Corral said.  “That is where we are trying to get to right now. The little things.”

A live scrimmage is a drastically different environment than an actual football game, but offers some game-like qualities like getting a play in from the sideline, correctly reading the call getting lined up correctly. All of this sounds elementary, but with the amount of young players Ole Miss has on the offensive side of the ball, those kinds of exercise are invaluable.

“We are out there on our own,” Corral said. “We have young players that need to realize they aren’t going to have the coaches out there (in a game) jumping on them if they do something wrong. They need to know it by themselves, and if not, they need to ask me.”

Corral said the offense is able to get the call in from the sideline in roughly six seconds. He noted the offense ran the ball consistently well and the passing game elevated as a result. Luke said Scottie Phillips broke a long run and that Snoop Conner ran well.

— There hasn’t been much separation among the three true freshman competing to be Corral’s backup, but Saturday’s scrimmage offered a chance to create some. Grant Tisdale and Corral donned the usual white non-contact jerseys quarterbacks wear in practice. John Rhys Plumlee and Kinkead Dent were made susceptible to live contact. Dent suffered a concussion early on in the scrimmage and will be out a few days. Plumlee flashed his ability to run, extending a few plays outside of the pocket.

“He got out of the pocket, used his legs and scored a touchdown on the perimeter,” Luke said of Plumlee. “We have been pleased with all three of those guys for sure.”

The coaching staff has been pleased with Plumlee’s development in the short time he’s been with the program. He didn’t have the benefit of going through spring football like Dent and Tisdale did, but Plumlee’s ability to run makes him an enticing option in Rodriguez’s offense.

— There were a few minor injuries from the scrimmage. Luke said a couple of guys suffered concussions. Outside linebacker Sam Williams suffered a minor knee injury and was in a green no-contact jersey at practice on Monday, and had a brace on his right knee. Williams was held out of team drills on Monday. Qaadir Sheppard did not participate in the scrimmage after breaking a bone in his hand at practice earlier in the week. The staff hopes Sheppard will be back in the next week. Starting free safety Jon Haynes has been day-to-day with a lower body injury and Jalen Julius was held out of the scrimmage with an ankle injury. Julius was limited in practice on Monday.

— Ole Miss has shown more two tight end looks so far in fall camp with seniors Jason Pellerin and Octavious Cooley on the field at the same time. Luke hopes this will help the Rebels run the football consistently and will aid a somewhat inexperienced offensive line. Ole Miss did not run a lot of two-tight end sets last season under former offensive coordinator Phil Longo.

“A little bit more perimeter blocking and showing up in other places,” Luke said. “The biggest difference is not just using them in pass protection but using them in all of our moving pocket stuff and getting integrated into the route tree a little more.”

Depth is a concern at this position as the Rebels do not have a tight end on the roster with a game reception behind Pellerin and Cooley. Pellerin has been sidelined with a concussion for the last week and the coaching staff moved running back D’Vaughn Pennamon to tight end temporarily until Pellerin returns. Sophomores Alex Faniel and Jonathan Hess have worked at tight end as well. Hess was moved from linebacker and Faniel came into the program as a quarterback.

— Cooley slimmed down 10 pounds from 275 last season and feels like he is at an ideal playing weight. He is comfortable with the tight end’s role in Rodriguez’ offense and thinks the unit will be utilized more frequently this season.

“I like the style they came in with,” Cooley said. “More routes. I like it. We have a lot of different personnel sets that move us around and lets us do some different stuff.”

— The first team defense at practice on Monday looked like this:

Miller and Linton seeing first-team action at the two safety slots is in part a result of Julius and Haynes being injured.  Same goes for Brendan Williams and Wiley at the outside linebacker slots with Sam Williams and Qaadir Sheppard out. Josiah Coatney and Tariqious Tisdale ran with the second team defensive ends with KD Hill at nose tackle. Donta Evans and Jacquez Jones ran with the second team inside linebackers. Willie Hibbler left practice for an undisclosed reason. The defensive two-deep has been fluid to say the least throughout camp and not much should be taken as concrete from Monday.

— Mohamed Sanogo, who emerged as a vocal leader on a struggling defense last season and led the unit in tackles, discussed what he saw from the defense in Saturday’s scrimmage.

RNC Responds to the Senate taking on Impeachment Trial

Thunder & Lightning: Mississippi State Learns About Itself In Tough Loss to South Carolina