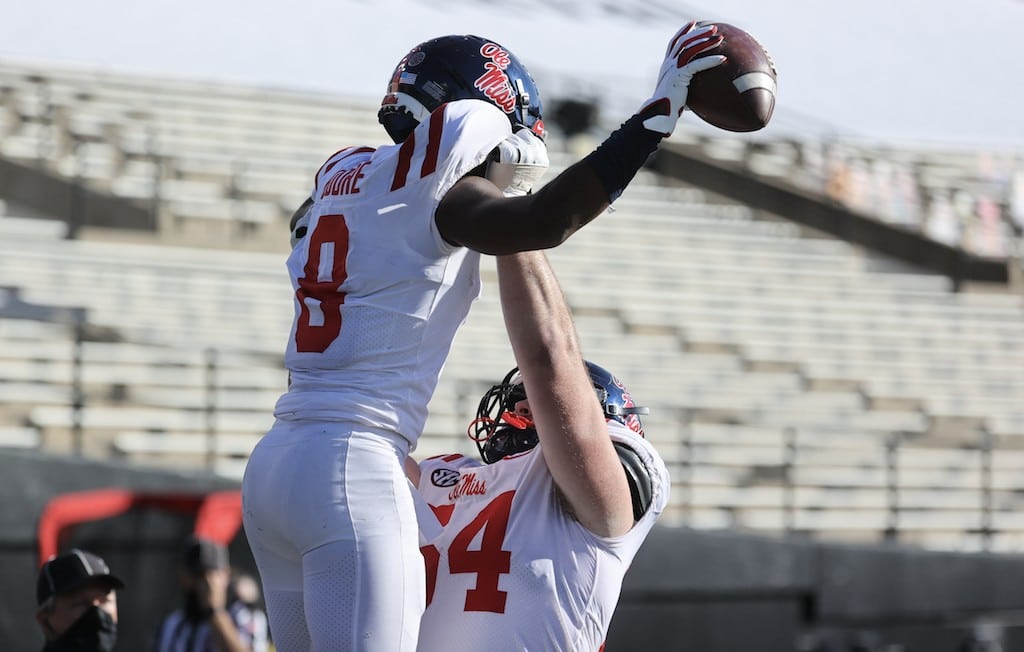 Entering the game on a three-game losing streak, Ole Miss played with urgency against an overmatched Vanderbilt squad that hadn’t played a game in three weeks as record-setting performances by Matt Corral and Elijah Moore propelled the Rebels to a 54-21 victory.

Ole Miss elected to receive the opening kickoff and set the tone with a masterfully executed 11-play 71-yard drive capped by a 1-yard touchdown run by Snoop Conner. This was the first of three first-quarter scores that gave the Rebels a commanding 21-0 lead after 15 minutes.

The Rebels built that lead as their sophomore signal-caller started a perfect 19 for 19 — breaking Eli Manning’s school record for consecutive completions. Before the day was over, Corral would tie another one of Manning’s records with six touchdown passes, three of which ended up in the hands of Moore. Corral finished with 412 yards and completed 31 of his 34 pass attempts. Just two games removed from a disastrous six-interception performance against Arkansas, Corral was historically accurate today, becoming the first QB in SEC history to throw six touchdowns and complete 90% of his passes.

Moore’s touchdown receptions, all in the first half, and his 14 catches tied Rebel records while his 238 receiving yards set a new one.

To open the second half following a stop by the Rebel defense, Corral found Dontario Drummond in the end zone to extend the lead to 41-14 with the addition of a 2 point conversion. TE Kenny Yeboah caught two touchdowns as well, one in the first quarter and another in the third to make it 48-14. Ole Miss would score one more touchdown before the day ended as John Rhys Plumlee hit Braylon Sanders for his first touchdown on the season.

In the running game, Jerrion Ealy led the way with 95 yards on 15 carries with true freshman Henry Parrish Jr. racking up 51 yards on seven touches as he saw his first action along with several other young players.

Vanderbilt was able to move the ball on the Rebel defense at times Saturday afternoon but drives continued to stall. QB Ken Seals found success through the air with a final stat line of 31/40 for 319 yards with 2 touchdowns and an interception. Ole Miss was better against the run, holding Vandy to just 102 yards although that was largely due to the Commodores playing from behind.

After three straight losses, the Rebels were in desperate need of a ‘get right’ game and that’s what they got in Nashville heading into the upcoming bye week. Ole Miss (2-4) returns to action on November 14th against South Carolina in Oxford.