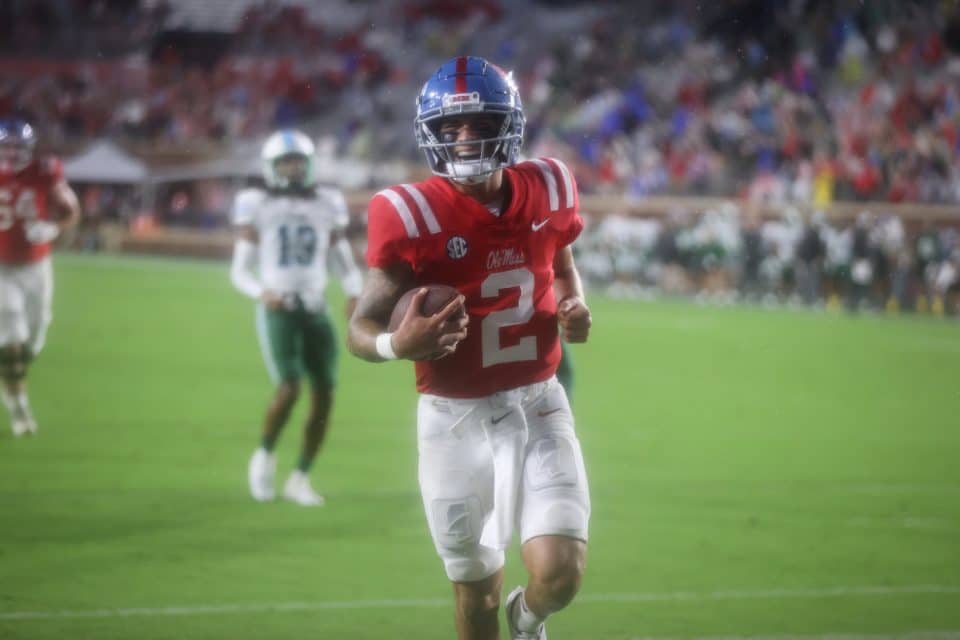 A near two hour weather delay couldn’t stop Matt Corral and the Ole Miss football team from lighting up the scoreboard once again on Saturday. The No. 16 Rebels (3-0) put on another offensive show as they knocked off Tulane (1-2) 61-21 at Vaught-Hemingway Stadium. The win lifts Ole Miss to its best regular season start since 2015.

The Rebels tied the SEC record with 41 first downs, while Corral accounted for seven scores, tying a school record. Corral completed 23-of-31 passes for 335 yards, while rushing for 68 yards on 13 carries. Jerrion Ealy led the Rebels on the ground with 103 yards on 15 carries, while Jonathan Mingo had a career high six catches for 136 yards and a score through the air.

Defensively, Chance Campbell led the Rebels with eight tackles, with he and Sam Williams each recording a sack. After giving up 226 yards of total offense in the first half, the Rebels pitched a second half shutout while the offense continued its record setting day.

Right out of the gate, the Rebels came away with touchdowns on their first two drives with ease. Henry Parrish Jr. scored the first from 19 yards out, while Corral called his own number, punching in a nine-yard score on the ground. With 6:41 left in the opening quarter, the Rebels held a 13-0 lead after a failed PAT. The Rebel defense dominated early as well, forcing consecutive three-and-outs to start the contest.

Tulane eventually caught a break, recovering a fumble at the Ole Miss 29-yard line. The Green Wave cashed in with a goal line score by Cameron Carroll to make the score 13-7 with 3:40 left in the first quarter. Ole Miss responded by securing the ball on their next drive and finding the end zone once again. Corral kept the ball himself and ran straight ahead for a 15-yard touchdown run, his second score of the game. After a failed two-point attempt, the Rebels had a 19-7 lead at the end of the first quarter.

Green Wave signal caller Michael Pratt led Tulane to the red zone after a third down keeper and a 40-yard deep shot to Duece Watts. However, it was all for not as Merek Glover’s 27-yard field goal attempt sailed wide left. The Rebel offense responded by going 80 yards in eight plays, with Corral throwing his first passing touchdown of the game to Dontario Drummond from 12 yards out. Ole Miss had a 26-7 lead with 9:40 remaining in the first half.

It took six plays for the Green Wave to respond. Pratt led Tulane into Rebel territory, throwing a screen pass to Shame Wyatt, who proceeded to weave through defenders for a 39-yard touchdown to cut the Ole Miss lead to 26-14.

After a surprise onside kick recovery by Miles Battle at midfield, Corral threw another touchdown pass to Jonathan Mingo on the first play of the drive to make it 33-14 Rebels. They would tack on another score following another three-and-out, with Drummond finding the end zone on an 11-yard sweep to the left. Tulane kept fighting offensively. Pratt found tight end Tyrick James all alone in the corner of the end zone for a 22-yard touchdown pass, cutting the lead to 40-21 going into the locker room.

Corral put up another gaudy first half, going 18-for-24 for 239 yards through the air and rushing for 40 yards while accounting for four scores total. Mingo had 136 of those yards through the air on six catches, which set a career high. In total, the Rebels had 448 yards of total offense at the break.

Tulane received the second half kickoff, but came off the field empty handed after a turnover on downs near midfield. Five plays later, Corral had his third rushing score of the game from 15 yards out. On the ensuing kickoff, true freshman Kentrel Bullock knocked the ball loose from Tulane’s Jha’Quan Jackson and Battle fell on it on Tulane’s 37-yard line. Corral added a fourth rushing touchdown two plays later to give the Rebels a 54-21 lead with 10:53 left in the third quarter.

Corral wasn’t done racking up touchdowns. Following a punt, the Rebel signal caller found Braylon Sanders for a deep 45-yard touchdown pass, allowing Ole Miss to crack 60 points for the first time since 2018 against ULM. The Rebels cruised through the remainder of the contest to remain unbeaten on the season.

The Rebels will be on a bye next weekend before traveling to Tuscaloosa on Saturday, Oct. 2, to face No. 1 Alabama in Ole Miss’ SEC opener. Kickoff and television coverage is still to be determined.