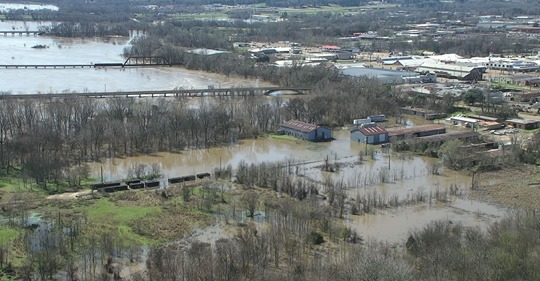 Mississippi’s delegation in D.C. is requesting federal aid following the February flooding of the Pearl River.

The delegation sent a letter to President Donald Trump in support of a major federal disaster request made by Governor Tate Reeves after the river reached its third-highest crest on record back on February 10th.

The full text of the delegation letter is below:

In the wake of recent devastating weather events and record flooding across the State of Mississippi, we request your full consideration of Governor Tate Reeves’s request for a Major Disaster Declaration under the Stafford Act.

We appreciate the continued efforts of the Federal Emergency Management Agency (FEMA) and anticipate expeditious assistance from the agency in assisting state and local officials in Mississippi as they continue their hard work to assess the severity of damages across our state from the severe storms, flooding, and mudslides that occurred from February 10 through February 18, 2020.  These storms caused the Pearl River to reach its third-highest crest on record.

As Governor Reeves indicated in his request, the Joint Public Assistance damage assessments conducted by the Mississippi Emergency Management Agency (MEMA), FEMA, and other agencies showed that at least one home was destroyed, 86 homes suffered major damage, and 400 homes suffered minor damage.  In addition, 16 businesses, four farms, 160 roads, one bridge, and three non-profit utilities were reported as damaged from these events.

On February 15, 2020, Governor Reeves declared a State of Emergency in Mississippi to begin rebuilding.  However, resources from the state government, local governments, and volunteer organizations are not adequate to recover from these damages.  Significant federal assistance and cooperation are required.

We are determined to help Mississippi recover by supporting the affected local communities and the State of Mississippi as they work to rebuild from these major weather events.

Thank you for your consideration of this request.  Please do not hesitate to contact us should you need further assistance in this effort.