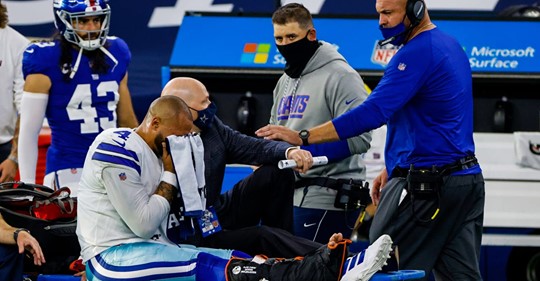 Image courtesy of the Dallas Cowboys

Prescott suffered a compound fracture and dislocation of his right ankle.  The Cowboys reported that surgery was successfully completed Sunday night, and he is expected to be released from the hospital today.

CeeDee Lamb spoke on how he balanced his emotions of Dak leaving, but helping the team rally to win.

Andy Dalton also spoke on how the team responded after Dak’s injury.

In the wake of Prescott’s devastating ankle injury, the outpouring of support can’t be understated.

Among all those voices, though, the Cowboys’ owner and general manager carries some particular weight.

Hours after the Cowboys’ 37-34 win against the New York Giants, Jerry Jones released this statement:

We are all heartbroken for Dak and this very disappointing injury. The outpouring of messages that I have received regarding his setback speaks volumes to the respect and admiration that he has earned from his teammates, former Cowboys players and Cowboys supporters everywhere.

I know the personal hardship and strife that he has faced, dealt with and overcome in his young life.

And I know of no one who is more prepared, from the perspective of mental and emotional toughness and determination, than Dak Prescott to respond and recover from this challenge that has been put in front of him.

He is an inspiration to everyone he touches. He has all of our love and support.

And we have no doubt that he will return to the position of leadership and purpose that he brings to our team.