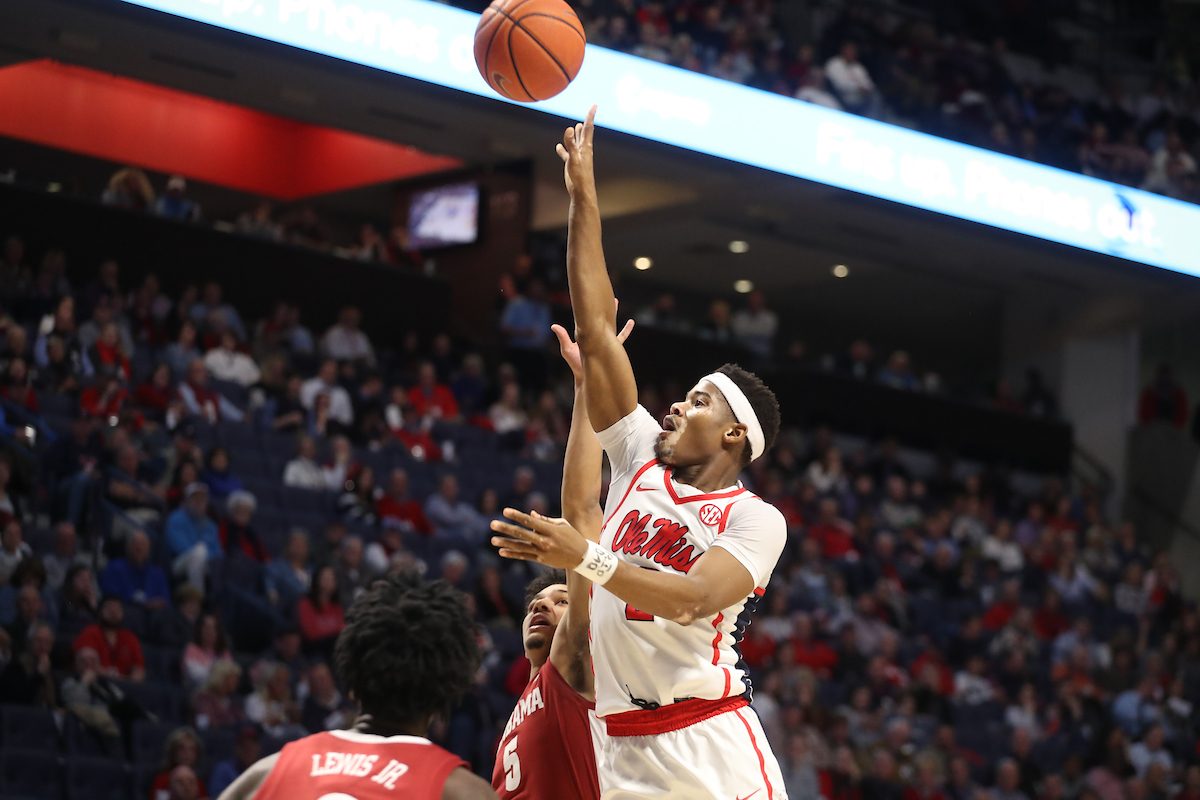 OXFORD — Kermit Davis hit the showers early, Breein Tyree fouled out and Ole Miss dropped its third straight in a lopsided 103-78 home loss to Alabama at The Pavilion on Saturday evening.

It was a thorough thrashing for 40 minutes. Alabama hit 13 triples, shot 56 percent from the field and benefitted from 21 Ole Miss turnovers. The Crimson Tide were the aggressor and were met with little resistance. They shot 28 free throws, pummeled Ole Miss to the tune of 40 paint points and a 33-29 advantage on the glass and had 25 assists on 37 made baskets. It is the first time the Rebels have allowed 100 points at home since The Pavilion was erected four years ago.

“They beat us in every area,” Davis said. “We chased them instead of guarding them. We never got in great rhythm.”

John Petty led Alabama with 21. Jaden Shackleford added 18 and Kyra Lewis Jr. poured in 17 points of his own. The Crimson Tide score 58 points in the second half alone.

Davis was animated for most of the game, upset with the officiating and imploring his team to defend with more energy and take better shots. Alabama led by 14 at halftime and the meltdown culminated with Davis’ ejection with 14:31 remaining in the game. He was unhappy with the way the game was being officiated. The game never had much of a rhythm and the 49 called fouls had something to do with it. Both coaches were upset at how the game was officiated. Alabama head coach Nate Oats was assessed a technical in the first half, as was Davis, whose second followed a Breein Tyree technical foul after being called for a defensive foul on the perimeter.

“I guess they called a block or a holding on him and Breein reacted. I know he didn’t say anything derogatory, I do know that. He was assessed a technical and not long after that I was ejected,” Davis recalled.

Davis wasn’t particularly animated when he was tossed. He was surprised by the occurrence and it was fairly emblematic of the lack of control the officiating crew had of this game.

“It kind of caught me surprise, bu that was is what happened,” Davis said. “You hate it for the fans. You want games to have rhythm. That is not negative toward officiating. I think everyone wants that . . . It was just one of those games.”

Davis exited and Ole Miss’ nightmare continued. Tyree fouled out nearly five minutes later  and still managed 28 points in 30 minutes. The game quickly devolved into a farce as Alabama ran away with it. Ole Miss struggled to defend Petty and the Alabama guards on the perimeter. The Crimson Tide drove the basketball with purpose, got Ole Miss into foul trouble and imposed their will.

“That is what we tried to focus on was staying in front of our man,” Devontae Shuler said. “We had been struggling with that.”

Shuler had 21 points on 8-13 shooting. Blake Hinson scored 11 and was the only other Rebel in double figures. Alabama had five players score at least 10 points.

To pile on to the defensive woes, sophomore forward K.J. Buffen exiting the game at halftime with a lower back issue. An already thin front court became even more short-handed. Alabama took full advantage with the 40 points in the paint to compliment a barrage of three-pointers.

Davis said he doesn’t believe there to be anything structurally wrong with Buffen’s back and it was just a nagging injury that flared up in the first half. Buffen tried to warm up after halftime and was in too much pain to continue playing.

Ole Miss never stood much of a chance from the this game tipped off. The Rebels are now 13-14 (4-10) and are running out of opportunities to salvage what has been a struggle of a season.

“They dominated us in every area,” Davis said. “It was our worse defensive performance of the year. We will get back to work tomorrow and get better.”

Practical tips to declutter while at home.