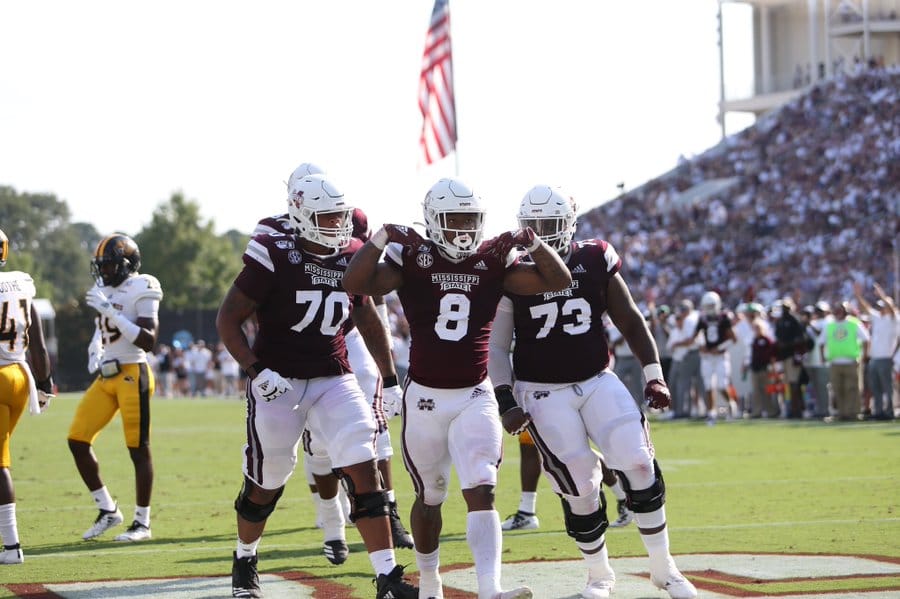 Mississippi State took an easier than it seemed victory over Southern Mississippi Saturday, getting a 38-15 win over their in-state rivals behind another solid day from Kylin Hill and three turnovers from the defense.

The Bulldogs won in spite of losing starting quarterback Tommy Stevens to injury in the second quarter, as true freshman Garrett Shrader came in and led the Bulldogs to 24 points in his debut. Hill snapped the Golden Eagles’ streak of not allowing a 100-yard rusher, putting up 125 yards on 14 carries after leaving the game in the first half as well. His return in the second half sparked a Bulldog ground game that accounted for 210 yards and 3 touchdowns.

Tommy Stevens was rolling when he got injured, completing 9 of his first 10 passes for a couple of scores. Garrett Shrader entered the game and kept the offense moving, going 7 for 11 as the Bulldog quarterbacks were a combined 15 of 21 on the day, making two straight games over 60% completion rate to start the season. Bringing in a true freshman in that situation could have been dicey for Joe Moorhead, but Shrader showed what made him the number one target on the recruiting board last year.

I could have picked one of a number of strong runs by Kylin Hill on the day, who has made it clear the Bulldog offense will go through him this season. Hill made it back to back 100 yard games for the first time in his career, and also grabbed a couple of passes. Hill looked like he might have to miss the second half after a second-quarter injury, but his return was all the offense the Bulldogs need to salt the game away.

A season ago, Mississippi State’s dominant defense did everything but force a lot of turnovers. Through two games in 2019, the Bulldogs have taken the ball away seven times, including three today. You can never game plan for turnovers, but with the Bulldog defense giving up more yards this season thus far, getting those has been invaluable, especially when the Bulldogs can play turnover-free the way they did today.

Kansas State will roll into Starkville on the back of two blowout wins. The obvious matchup to watch is the Wildcat rush offense against the Bulldog defense. State allowed 110 yards on 27 to Southern, a week after the Golden Eagles could only muster 96 yards against Alcorn State. It will be critical for the Bulldogs to be stouter up front than they’ve shown in the first two games of the season.