Last week, the Corinth School District became the first district in Mississippi to bring its students back to the classroom since the onset of the COVID-19 pandemic. Just seven days later, the district has confirmed five cases at Corinth High School, forcing state health officials to confront the concerns held by many parents as they prepare to send their kids back to school.

In a statement posted to Facebook, the district explained that the infected students have not been at school since last Tuesday. Through contact tracing, additional students have been placed on quarantine. 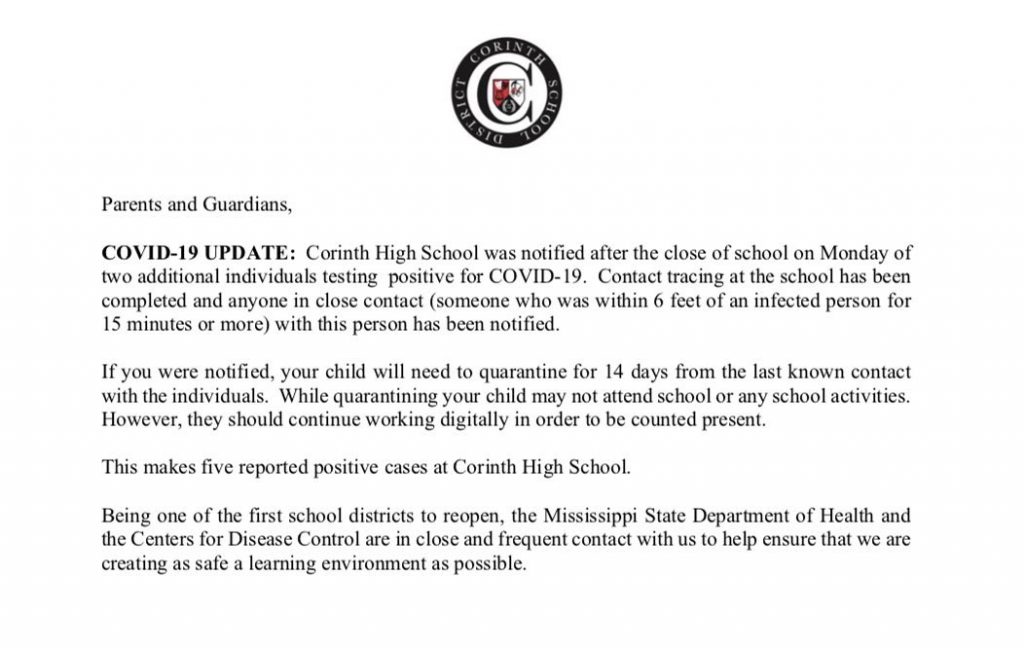 During a conversation with the Mississippi Medical Association on Friday—when there was one confirmed case within the district—State Health Officer Dr. Thomas Dobbs expressed concern as students across the state are set to begin school in the coming weeks.

Governor Tate Reeves has long supported a return to in-person instruction, and Dr. Dobbs was in agreement until a recent rise in cases led him to reconsider.

“Unfortunately, nothing can not be political these days. So, I think sometimes we’re making rash decisions because we’ve planted our flag,” he said. “I thought that it would be the right time to start until a little while ago. I do think it’s a good idea to put our toe in the water and go slowly, offer as much online as we can, and maybe delay in-person until September.”

The state’s top health official knows that there are other factors at play when it comes to a return to school, but he left no room for interpreations when he stated “I think it’s a good idea to delay school.”

When asking why school starts in August to begin with, Dr. Dobbs explained that he was told “football.” Week one of the high school football season has been delayed until September 4th.

Currently, there is no percentage threshold that would trigger a shutdown for a school, but State Epidemiologist Dr. Paul Byers said that some states are using a 5% threshold. Dr. Dobbs said that is likely too high and that if a school has three different classes with a few cases each, “that’s probably time to back off.”

Individual school districts ultimately drew up their own plans to return to school and those plans were submitted to both the governor and the Department of Education. Dr. Dobbs said that he reviewed the summary of all of the plans.

“A lot of them just say ‘traditional school’ believe it or not, which to me is just wholly unacceptable, it’s crazy,” Dr. Dobbs said.

Schools were given the option to choose between three plans: traditional, online, or a hybrid schedule.

Dr. Dobbs explained that the Department of Health will recommend universal mask mandates for all schools and all age groups.

The full conversation with Dr. Dobbs can be seen below: