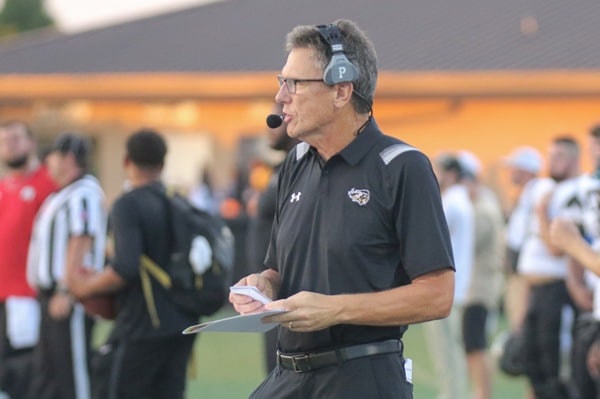 The second-longest tenured football coach in East Central Community College (ECCC) history is retiring at the end of the season.

As announced by the college on Wednesday, Ken Karcher will be stepping away from the program after 10 seasons as head coach. Since accepting the job in January 2013, Karcher has twice been named coach of the year leading the Warriors to an overall record of 31-55 during his tenure.

“Ken Karcher is that coach who every mom and dad wants their son to play football for,” ECCC President Dr. Brent Gregory said. “He not only is an outstanding football coach but a man of integrity and a great role model for the hundreds of young men who have come through his program the past decade.”

Other achievements of Karcher include guiding the program to its first playoff appearance in over a decade in 2015, leading that same team to a bowl game for just the fourth time since ECCC launched its football program in 1928, as well as working avidly to get a state-of-the-art football operations center built on campus.

“East Central and Decatur will always hold a special place in our hearts, and I am grateful for each person who has blessed my life over the last 10 years,” Karcher said. “The memories I will hold close to my heart are about people I encountered along the way.”

Over his 32 years of coaching, Karcher held assistant positions at Eastern Michigan, Toledo, Pittsburgh, North Texas State, and Fellowship Christian High School. He served as the head coach of Liberty from 2000-2005 and also coached professionally for both the Orlando Thunder of the World Football League and the Rhein Fire of NFL Europe.

As a player, Karcher was signed by the Denver Broncos after attending Notre Dame. He was a backup to John Elway when the team played in Super Bowl XXII in 1988.

Karcher will be recognized at ECCC’s final home game of the season on Thursday, October 20 with a nationwide search for his replacement beginning immediately after the season.