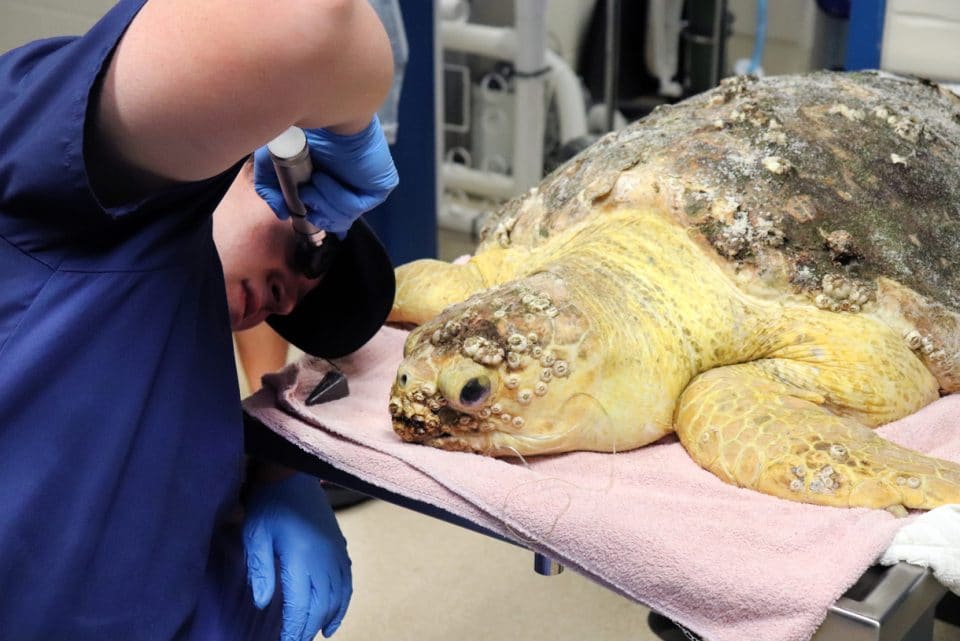 An endangered loggerhead sea turtle is receiving treatment at the Mississippi Aquarium.

The turtle has arrived at the facility after it was caught on the Gulf State Park Fishing Pier in Gulf Shores, Alabama. According to the aquarium, the turtle was caught on a fishing line last week, but she managed to escape. The turtle was re-caught on October 7 and brought to the pier by rescuers.

The turtle had multiple hooks and other fishing gear stuck in her flippers, shell, and mouth, a severely fractured shell and visible barnacles attached all over her body. Due to the size of the turtle, the Mississippi Aquarium is the only facility in the area capable of providing the proper care.

“Lyndsey Howell, NOAA’s Sea Turtle Stranding and Salvage Network State Coordinator for Alabama, Mississippi and Louisiana, called Mississippi Aquarium for help as no other rehabilitation centers in the area were able to handle a turtle of her size,” Mississippi Aquarium Vice President of Veterinary Services Alexa Delaune said. “The Aquarium’s veterinary team drove to Gulf Shores to meet the rescuers and pick up the injured turtle to bring her back to our clinic for evaluation.”

“The bloodwork showed the turtle is very anemic and has low protein,” Delaune said.

Dr. Perry also explained that the fractures to the shell appear to be an old injury likely due to a boat strike. Additionally, x-rays revealed three additional hooks in the gastrointestinal tract. The turtle will require very long-term, intensive care and many procedures to address her medical issues.

If you would like to support the veterinary care of injured animals, please click here to donate.

Registrations for 25th Anniversary of Cruisin’ the Coast exceeded expectations