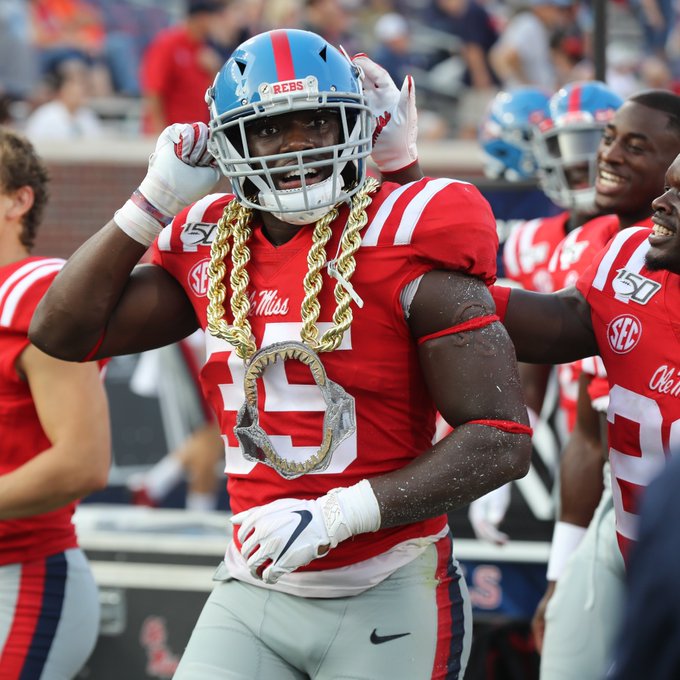 OXFORD — Matt Luke called it a learning experience, and that may be fair, but the performance highlighted a handful pressing issues and the final score was certainly indicative of the struggle.

“I think these kids learned a valuable lesson that nothing in life is ever easy,” Luke said. “I knew going into the week that Southeastern Louisiana would provide some challenges with the different looks offensively and defensively, but I am happy we got the win.”

Ole Miss slept-walked its way to a 40-29 win, but the defensive deficiencies glared and the offensive line woes resurfaced.

The Lions wracked up 375 yards of offense. Quarterback Chason Virgil picked apart the Rebels secondary in intermittent spurts. Virgil went 29-of-44 for 306 yards and a pair of touchdowns but turned the football over three times. Myles Hartsfield picked off the first pass Virgirl threw, Jon Haynes picked one off in the third quarter and Donta Evans snagged one on fourth down, a play that may have been the most important play of the game with the Lions driving in Ole Miss territory down eight points with just over five minutes left.

But there were holes in the secondary and Southeastern Louisiana found them. Ole Miss was fortunate early in the game. A couple of coverage gaffes proved harmless. Receivers got open behind the defense, but Virgil missed the mark. Through the first two games, a common refrain with regards to improvement of the defense was how it tackled better in space and didn’t leave as many men wide open, particularly in flats and out of the backfield. The Rebels regressed in that regard against the Lions.

“The three interceptions is good,” Mike MacIntyre said. “I said this week that the secondary needed to improve and they will learn a lot from this. There was some good. I knew they would be able to attack us vertically and in space. We didn’t do as good a job on those flares passes out there, and that is something we have worked on, but we have to be better.”

Up front, the Rebels were struggled to block an inferior defensive line. Corral was sacked three times and coughed up the football on one occasion in the third quarter. The Lions recovered on the Rebels’ nine-yard line, and it set up a score that pulled them within five at 34-29. Southeastern Louisiana netted 11 tackles for loss. Scottie Phillips averaged 4.0 yards per carry and totaled 109 yards on 26 touches.

“We have to eliminate those negative-yardage plays,” offensive coordinator Rich Rodriguez said. “Those are absolutely killing us. We will work hard on that.. We are not good enough to play behind the sticks. We have to get positive yards on early downs. We have to get in a rhythm. We have to avoid the third-and-10, third-and-12 situations, and execute better.”

Southeastern Louisiana — like Memphis — featured a lot of pre-snap movement with its defensive front. The goal of that is to confuse the offensive line and the Rebels have been bewildered by it twice.

“The blitzed and moved pretty much the whole game,” Luke said. “It created some room in the running game, but also some negative plays. One thing we can’t do is turn it over. We need to block better and take care of the ball.”

These two areas — the offensive line and the competency of the defense— were the two overarching concerns for this club entering the 2019 season. The offensive line lost 129 starts and four contributors from a season ago The defense was among the worst in college football — the ninth-worst to be exact. While the latter showed some signs of improvement in the first three games, the former was a concern from the first snap in the Memphis game on.

Should the defense get a little bit of a pass with an afternoon kickoff against an opponent that doesn’t exactly garner attention? Maybe, but the concerns in the secondary are very real and the improved performance in the first two games came against two offenses that can’t be deemed as potent by any stretch.

The offensive line should muster the most concern for Luke and his staff, There are no answers. Greg Little and Sean Rawlings aren’t walking through that door. The reinforcements are guys who either haven’t played at all throughout their career, or are true freshmen. Ole Miss is searching for answers up front and there may not be any to find. It’s made the development of Matt Corral more difficult. Corral had moments in this one. He went 21-of-30 for 239 yards with two touchdowns and no interceptions, but fumbled twice and lost the one that set up the Lions for their third-quarter touchdown.

“One was him getting blind-sided and couldn’t see, the other he held it too long,” Rodriguez said. “Matt is going to learn. I sometimes forget this is the first time he has played. He’s a redshirt freshman. Matt is conscientious enough to correct his errors. I have to coach him better too. He will learn from it.”

It wasn’t all bad offensively. The Rebels scored 40 points, enough to blow out an inferior opponent, and amassed 459 yards of offense. Corral threw a touchdown to Elijah Moore and one to Jason Pellerin. Moore has become his most trusted target. The sophomore slot receiver had seven catches for the second week in a row.

Jerrion Ealy scored his first collegiate touchdown when he took a kickoff return 94-yards to the end zone in the first quarter.

“I was thinking, I better score,” Ealy said with a grin. “Don’t get caught.”

The freshman created a two-play, 82-yard touchdown drive on his own in the second quarter with runs of 50 and 32 yards. Ealy had 273 all-purpose yards and 101 on the ground. He broke Dexter McCluster’s freshman all-purpose yards record in a single game.

“That kid can run, catch and really do it all,” Corral said. “That was expected.”

The defense still has a long climb ahead and hasn’t faced an offense with a ton of firepower. The 29 points was the most it’s given up all year, but it did force five turnovers. The offense ran for 220 yards, spearheaded by Phillips and salted away by Ealy and Snoop Conner, but turned it over twice. Call it a lethargic week, a bad game or whatever you wish. But this team won’t be able to hide these issues as it wades into the teeth of its schedule.

“We have to go correct all of it and get back to work,” Luke said, “Any win is a good win. We just need to get better from it.”