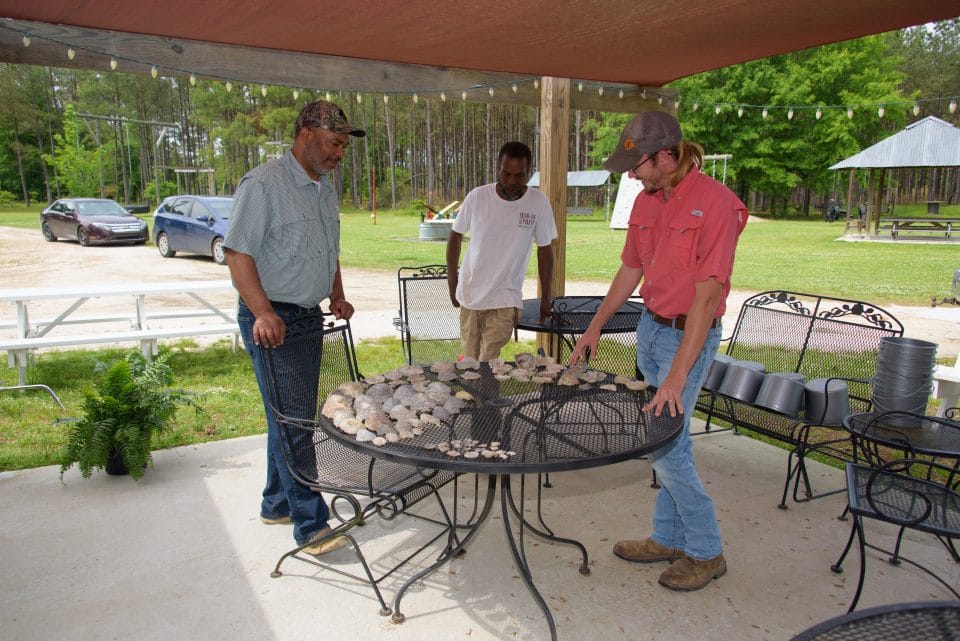 The kids who dig in the dirt and rifle through the gravel do grow up, and many of them still keep their eyes on the ground whenever they’re outside. And, if they find an old bone or even a shell from an extinct oyster, they know they’ve found something special.

So often, that’s the end of the story. The finder doesn’t know where to go to request an expert opinion and may have concerns about expenses for testing and analysis. The bones or rocks go into a drawer or back outside. 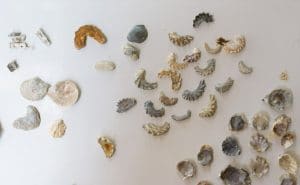 In October 2020, Corey Unruh almost found himself in that position. He was deer hunting on private property in Noxubee County, and, when he shined his truck light across the ground, he saw what he thought were vertebrae, shells, and at least one tooth. He called his brother, then his mom.

“I’ve always been looking at the ground and picking things up,” he explains. “Once I knew I had a tooth, I called my brother right away; I knew he’d be as excited as I was. Then, I talked to my mom, and she knew how to help me get answers.”

She called her local Mississippi State University Extension Service agent, Crayton Coleman, a longtime friend of the family, to find out if her son had made the find of a lifetime—dinosaur bones.

Because Extension has a variety of programs for hunters, anglers, and outdoor enthusiasts, Unruh figured Extension could get answers about the fossils he found.

Coleman wasn’t sure what Unruh had discovered, but he knew whom to ask: Dr. Leslie Burger, assistant Extension professor. They’ve met repeatedly over the years at various Extension events.

“If it matters to our client, then it matters to us,” he emphasizes. “We’re going to get the answers that people need, and that’s why Extension still matters today.”

Although Burger’s expertise is in wildlife ecology and conservation education initiatives, not in the study of fossils called paleontology, she knew that getting good pictures for the experts was critical to identifying the bones. Also, she knew where to send the images: to paleontologists Dr. Renee Clary, director of the MSU Dunn-Seiler Museum and MSU professor of geology, and George Phillips, curator of paleontology at the Mississippi Museum of Natural Sciences.

“It’s important to get something like a dollar bill, a coin, or a pen with the object and take pictures from a variety of angles to show perspective,” Burger explains. “Getting photos of items in the position they were found is helpful, too. After the Unruhs had taken the bones out of the ground, they spread them out on the table, and Crayton used a blue pen for perspective as he took pictures from a variety of angles.”

Coleman sent Burger the images, and she passed them on to Clary and Phillips. Clary identified several mollusks, including extinct giant oysters. Phillips identified vertebrae and skull fragments that came from an angel shark or early form of eagle ray. Finally, the researchers agree the tooth may have belonged to a mosasaur, an extinct seafaring reptile resembling the modern marine iguana.

The shells, bones, and tooth are not dinosaur fossils, they say. Instead, they’re actually fossils of prehistoric marine animals from the Cretaceous Period, the last geological period before non-flying dinosaurs became extinct. Noxubee County—and almost all of Mississippi—was under water then.

It turns out Unruh uncovered a trove of evidence suggesting what marine creatures lived in Mississippi while dinosaurs roamed the planet.

According to Phillips, Noxubee County has a chalk substratum that has preserved an abundance of fossils. He receives inquiries regularly and is glad to help people identify the fossils they find.

For Unruh, at least, the hunt for additional fossils has just begun.

“I’m going to just keep my nose to the ground and keep looking for them. I mean, this stuff, these bones, these fossils, are all over,” he says. “People can call Extension if they find anything. And Extension will help them figure out what they’ve got.”