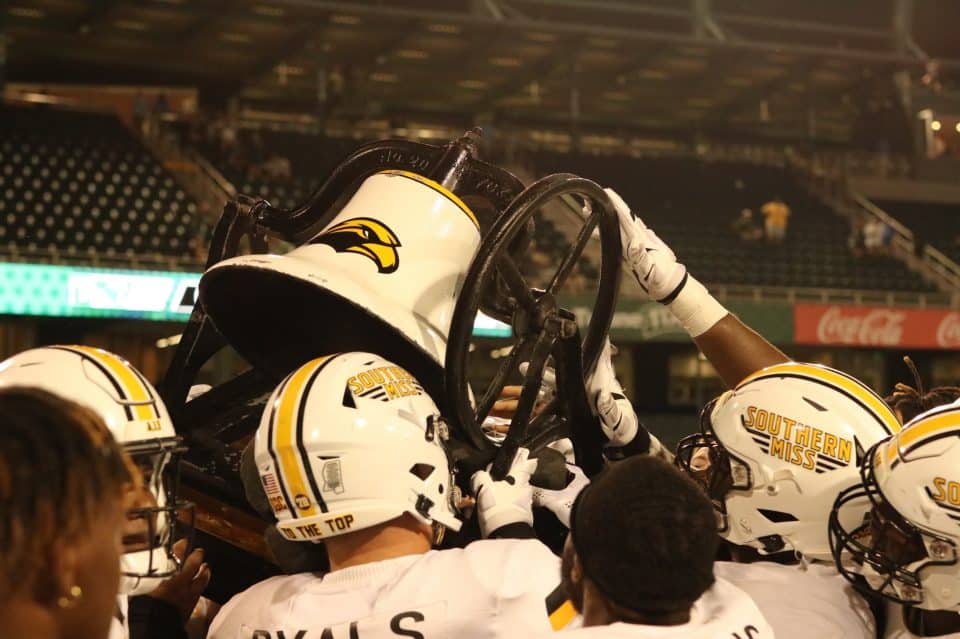 All the talk going into the Battle for the Bell surrounded Southern Miss head coach Will Hall facing off against his former boss Tulane head coach Willie Fritz. Well on Saturday, the mentee got the better of the mentor in a game where fortune was on the side of the Golden Eagles.

RELATED: ‘Coach Fritz saved my career’: Will Hall looks ahead to matchup versus Tulane

Southern Miss turned to true freshman Zach Wilcke once again to run the offense. After a slow start, Wilcke was able to give the Golden Eagles a needed spark with a touchdown pass to wide receiver Jason Brownlee. A pair of field goals from senior kicker Briggs Bourgeois also helped USM put points on the board against a ferocious Green Wave defense.

While the Southern Miss defense struggled to slow Tulane’s offense early in the game, they buckled down and made plays at the most crucial moments of the game. A pick-six secured by star defensive back Eric Scott in the fourth quarter would give USM a double-digit lead and deflate Tulane’s ability to make a late push to get back in the game.

Overall, Southern Miss simply capitalized on opportunities and made winning plays by forcing turnovers. A blocked field goal paired with the aforementioned interception paved the way for USM to maintain the lead and ultimately win the game.

Southern Miss is set to travel to Troy after a bye week on Saturday, October 8 at 6 p.m. CT.