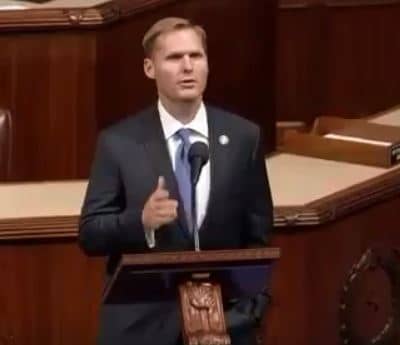 Congressman Michael Guest spoke on the House floor last week against the New Way Forward Act, a bill intended to “reform the process for enforcing the immigration laws of the United States.”

Guest says the legislation would establish numerous new protections that illegal immigrants could claim for immediate release into the United States. In addition, the bill would drastically reduce the authority of local and state law enforcement officers have to enforce immigration laws in our communities. Congressman Guest vocally opposed the bill on the House floor, stating:

“I rise today as a Member of the Committee on Homeland Security to express my strong opposition to the New Way Forward Act, which would completely eliminate our nation’s ability to control our borders and determine who and what enters our country. It would cripple the efforts of our law enforcement officers to remove dangerous criminals from our streets and it would undermine the sacrifices the men and women of law enforcement agencies make every day for our nation. Additionally, the New Way Forward Act would encourage and open new pathways for cartel members and human traffickers to enter and remain in the United States. Meanwhile, conservative policies like building the wall and supporting law enforcement agencies reduced the number of apprehensions by almost 75% since last May and led to the seizure of more than 50,000 pounds of drugs at our Southwest Border last month alone. I strongly urge my colleagues to oppose the New Way Forward Act.”