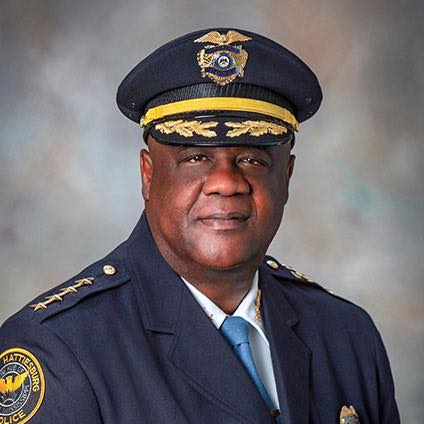 After 39 years of service to law enforcement, with five as Hattiesburg’s top cop, Hattiesburg’s Police Chief Anthony Parker will retire at the end of the year.

“It has been an honor and a privilege to serve as Hattiesburg’s chief of police. I am grateful to the citizens of this community and for the ability to serve under two great men – Mayor Johnny DuPree and Mayor Toby Barker,” said Parker. “I have a lot of respect for both of them, and I am grateful for having an opportunity to serve a city I love.“

Since 2015, Parker has led the department of more than 150 officers and employees. He was appointed as chief by former Mayor Johnny DuPree in 2015 and was reappointed in 2017 by Mayor Toby Barker.

“In the early months of our administration, I quickly saw Chief’s steady demeanor, strength of character, and ability to empower those around him. I am grateful for his commitment to our community and for tackling a lot of big visions for the department,” said Barker. “With his leadership, we have created a strong foundation that will continue to serve the growth and continued trajectory of the Hattiesburg Police Department.”

Among many achievements, Parker’s banner initiatives include increasing manpower numbers, establishing stronger ties to the community through Coffee with a Cop, neighborhood meetings and increased bike/foot patrols, increasing transparency in communication, and working with the administration to help recruitment/retention through the adoption of a pay scale and professional development agreements with The University of Southern Mississippi and William Carey University.

Parker added, “I’m proud of the work I’ve done here and with all of the agencies I’ve worked with. Specifically, I feel like I’ve been able to bring consistency, accountability, and trust to the table, and that means a lot to me. It has been a very rewarding career. I’m more than grateful, but now it’s time for my family.”

In addition to serving as the current chief of police for the Hattiesburg Police Department, Parker’s career includes 28 years with the Mississippi Highway Patrol, where he rose through the ranks as a patrolman to master sergeant. He retired in 2009 while serving as a special agent for the department’s Bureau of Investigation.

After retiring from the Highway Patrol, he joined the Crystal Springs Police Department in 2009, moving up from patrolman to sergeant to lieutenant, before becoming chief in 2013.

Parker said law enforcement wasn’t always a part of the plan. After growing up in Alabama and later playing football at The University of Southern Mississippi, he was in-between careers when a friend encouraged him to consider applying to the Mississippi Highway Patrol.

He added, “I never imagined that moment would lead to me serving as chief in the same city that gave back to me during my time as a Golden Eagle, but it did. God’s hand has played a vital role in every step I’ve made.”

When asked about the evolution of the law enforcement industry over the last 40 years, Parker believes having integrity – always choosing to do the right thing – being flexible and never growing complacent has been important to his success and believes they are keys for the success of new officers moving forward.

He stated, “I’ve spent my entire career in an industry that has experienced tremendous change – from training and operations to community relations. This job isn’t for everyone, but it is for those who understand that service to the community is a calling. Serving with a genuine and sincere spirit must remain a priority.”

Parker will continue to lead the department through the end of December. After, he plans to spend much of his time at his family farm in Montgomery, Alabama.