Both a teacher pay raise and the elimination of income tax are expected to be brought up in the House of Representatives on Wednesday.

In an interview this morning, Representative Tom Miles told SuperTalk Mississippi News that “it’s going to be a historic day in the legislature.”

“This is going to be a great day for our state,” the representative for the 75th district said. “These are two great pieces of legislation that we think will put our state in a good position to move forward in a lot of ways.”

On Tuesday, the House Appropriations Committee responded to the Senate’s teacher pay raise proposal with one of its own that would increase all teachers from $4,000 to $6,000 per year. The raise would skyrocket Mississippi’s starting pay for teachers above the southeastern United States average of $39,754. 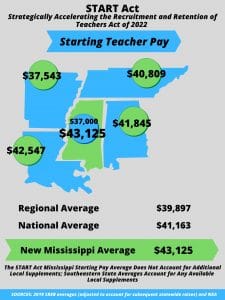 On the other hand, the “Mississippi Tax Freedom Act of 2022” has made it out of the House Ways and Means Committee and will phase out the state’s income tax.

Governor Tate Reeves previously said that the elimination of the state income tax will make Mississippi more competitive with the likes of Tennessee, Texas, and Florida. Lt. Governor Delbert Hosemann, who presides over the Senate, is also in favor of a form of tax reduction.

The House gavels in at 2 p.m. on Wednesday.