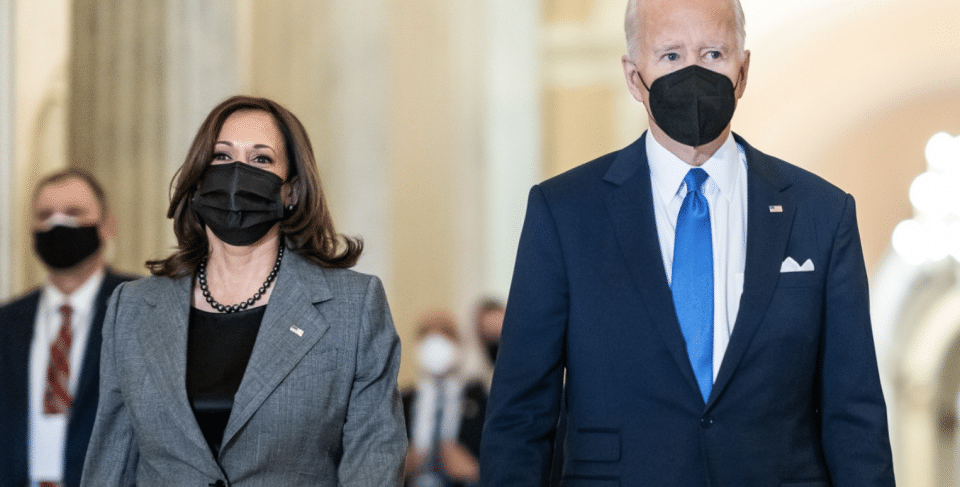 Recent sanctions imposed by Biden on Russia, while onerous, have stopped short of crippling Russia’s cash crop: oil and gas. In fact, Biden has imposed more “sanctions” on American oil concerns than Russian oil companies. These policies have put Putin in the driver’s seat.

Make no mistake, wars cost money, and Putin gets much of the cash from the sale of oil by state-owned firms. The Russian federal government generates nearly 40 percent of its revenue from the state-owned oil and gas industry, with the European Union being Russia’s largest oil and gas customer. Oil is a global commodity and Russia accounts for about 10 percent of the world’s supply and roughly 3 percent of U.S. oil imports.

During his recent State of the Union address, Biden called for an expansion of manufacturing and technology investments in America. He committed that the $1.9 trillion bipartisan infrastructure plan would utilize American suppliers and domestic (union) labor. He implored Americans to buy American. Apparently, that directive doesn’t apply to American oil, as the U.S. imported 672,000 barrels of oil per day from Russia in 2021 — an all-time record and a 79 percent increase from just four years ago.

Both Democratic and Republican members of Congress are pressuring Biden to ban Russian oil imports. Democrat Sen. Jon Tester (D-Mont.) said, “It is so obviously apparent that we need to cut it off. I wonder if there’s a reason we haven’t [and] what the hell the reason is.”

“We should stop buying over 600,000 barrels [of Russian oil] a day in America. Can you believe that? No one knew that. No one paid attention to it. And that has to stop,” centrist Sen. Joe Manchin (D-W.Va.) told reporters. Even Nancy Pelosi got in on the action, encouraging Biden to “ban it.”

Despite the pressure from both congressional Republicans and Democrats, the flow of oil from Russia to the U.S. continues, with no indication it will end, effectively funding Putin’s war.

And as gas prices soar, U.S. Labor Secretary Marty Walsh recently doubled down on the administration’s position that the U.S. must “continue to work on our energy plans, which includes energy” and acknowledged that “it’s not going to happen tomorrow.” Walsh said that drilling for more domestic oil is not on the table. Meanwhile, the Biden administration is negotiating with Iran to strike a nuclear deal with the rogue nation that could add to the global supply of oil, hoping to drive down oil prices.

Wrap your head around that, Americans. Our government says no to increasing domestic oil production but is okey-dokey with importing oil from a rogue nation run by a dangerous authoritarian Islamic regime. If allowed, Iran’s theocrats would eagerly use nukes to eviscerate much of the Western world. This move is consistent with Biden’s Anybody-but-America-First policy.

Biden continued to lash out at the private sector during his State of the Union address. In a condescending, scornful tone, he called on companies to “Lower your costs, not your wages.” As if successful businesses aren’t constantly focused on achieving cost efficiencies. Has the president forgotten that wages are a cost? Biden’s lack of understanding of basic economic fundamentals is stunning.

Despite former President Donald Trump’s warnings to Germany in 2018 about relying too heavily on Russian oil and gas, the nation and EU overall have done little to reduce dependency on Putin’s gas station. Russia supplies roughly 25 percent of Europe’s oil and 40 percent of the EU’s natural gas. Germany imports over half of its natural gas and coal from Russia and about a third of its oil.

The bottom line is that the EU needs Russia’s fossil fuels and Russia needs Europe’s money.

The solution lies under our feet. Unfortunately for America, Biden, heavily influenced by the woke climate change mob, won’t let us leverage the precious gift of natural energy God has bestowed on this country. Rather, he begs Saudi Arabia to pump more, and last year, Biden waived Trump’s sanctions on the Nord Stream 2 pipeline, an $11 billion project that connects Russian gas to Germany.

During the 2020 presidential campaign, candidate Joe Biden proclaimed climate change the “number one issue facing humanity.” Those strong declarations were music to the ears of the green zealots who jumped on the Biden bandwagon that ultimately delivered the former vice president to the White House.

On the campaign trail, Biden laid out a sweeping $2 trillion plan to cut greenhouse gas emissions and ultimately transition the nation completely away from fossil fuels, replacing them with so-called clean energy. He described climate change as an “existential threat to humanity” and declared that “We have a moral obligation.”

Once elected, Biden wasted no time implementing his climate change agenda. Before the teleprompters guiding his inauguration speech could be taken down from the Capitol steps, the masked-up president was affixing his signature to a series of executive orders — 17 to be exact — many of which involved climate change.

Most Americans likely did not consider the impact of Biden’s policies, implemented via executive fiat, on future global events, or the price of gas at the pump, now topping $4 for a gallon of regular, stinging motorists with each credit card scan when filling up.

Putin has taken note of all these dynamics. The heavy dependence on Russian oil and gas places the U.S and its European allies in quite the conundrum in seeking a resolution to Putin’s invasion of Ukraine. Putin, a megalomaniac, has made clear his intentions to reconstitute the old Soviet Union. But he needs money to prosecute the military offensive necessary to fulfill his imperialistic ambitions. Putin has calculated that the flow of Russian oil and gas will not be disrupted, thus, the money spigot — delivering $700 million per day to Russia — will remain open.

Many military and political leaders believe that Putin and his orbit of oligarchs will continue to wage war only if funds are available to finance Russia’s military operations. Cutting off Putin’s bank account is thought to be the only way to silence the bombs and tanks. This would however require sanctions on Russia’s energy industry imposed by the West. Those would surely cripple the EU economy and cause global energy prices to climb even further — including here in the U.S. — where Americans are wary of the precipitous rise at the pump since the Democratic president took office.

As Democrat strategist James Carville famously quipped during the 1992 presidential campaign, “It’s the economy, stupid.” Democrats know that heading into the midterms, the cost to fill up will most certainly influence voters. Higher prices over the next few months could spell a loss of control of both houses of Congress for Democrats.

When gas was averaging $2.74 domestically in 2018, the energy giant made $21 billion in profit. The present average of $3.61 reflects a 32 percent increase over the average four years ago. So, based on the pronouncement from anti-capitalism Democrats such as Bernie Sanders, one would expect that Exxon’s profits would be higher than 2018 by a corresponding 32 percent — at a minimum.

Again, careful, comparative analysis of the company’s income statements reveals Exxon is only expected to generate roughly 10 percent more profit this year than in 2018. Additionally, in 2020 — while governments shut down the economy to bend the COVID curve — the company lost $22 billion. In fact, for the years 2020 and 2021, ExxonMobil essentially broke even.

Thanks to efforts by activist investor Engine No. 1, Exxon’s 12-member board now includes three members who seek to convert the largest oil company in the Western world to a producer of green energy. Last May, a Dutch court ordered Royal Dutch Shell to cut its carbon emissions by 45 percent by 2030. It’s hard to boost global supply on that basis.

Psaki and her boss tell us to rush out and buy an electric vehicle and weatherize our homes to reduce our consumption of oil. Of course, on a Friday in January, she also told Americans to “take a kickboxing class, have a margarita and do whatever you need to do this weekend” to relieve their stress. But she stops short of attaching Americans’ mounting stress to her boss’s policies.

Then there are Biden’s recent nominees to the Federal Reserve Board of Governors. Two of those picks, Sarah Bloom Raskin and Lisa Cook, are thinly veiled woke activists not suited to overseeing monetary policy, the Fed’s stated mission. Raskin, Biden’s selection for the Fed’s powerful vice chair for supervision, wants the monetary policy-making organization to shift capital away from the fossil fuels industry over to green energy. She supports requiring the Fed to use stress tests on banks to effectively limit capital to fossil fuel concerns.

Mix it all up — anti-fossil fuels executive orders, climate activist boards guiding giant energy companies on a path out of the fossil fuels business, and Fed board members restricting capital to fossil fuels — and what results is a toxic elixir that ultimately reduces the global supply of oil. Less supply, chased by an increased demand, equals higher prices and more reliance on Russia. Putin knows this. He’s counting on it.

The Russian president is leveraging the West’s green-at-all-costs obsession to line his pockets and seize control of Ukraine, and it may embolden him to invade Lithuania, Latvia, Estonia, and beyond. Again, the only way to foil Putin’s aggression is to cut off his money. And that can only be achieved by crippling Russia’s state-owned oil industry.

To make up for Russia’s 10 percent of the global oil supply, Biden should take action to increase American oil and gas output. He should restart the construction of the Keystone XL pipeline immediately. Biden should rescind orders which prohibit drilling on public lands and federal waters. And he should slash onerous and unnecessary regulations that make it cost-prohibitive to develop new oil. Finally, he and his party should dial back the constant anti-fossil fuels rhetoric and encourage America’s fossil fuels industry to ramp up exploration and production of fuel.

After all, what value is there in combatting climate change, ostensibly to save the planet, if a weak response allows a madman to blow it up?

Mayor regrets claims of bribery made to Jackson City Council