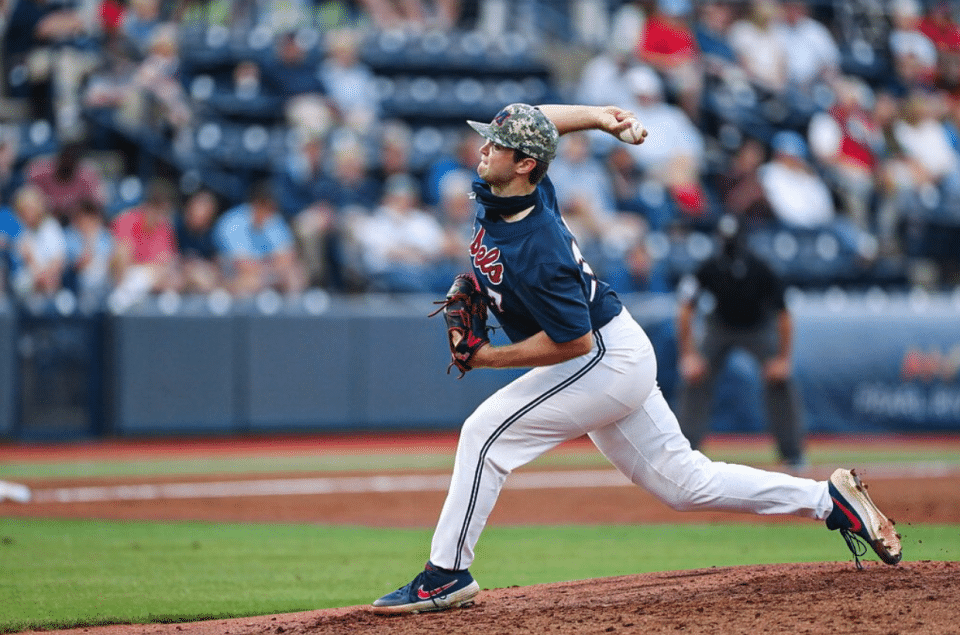 OXFORD, Miss. — After a week off, Gunnar Hoglund didn’t miss a beat on Friday, pitching another gem, allowing No. 12 Ole Miss to take a series opening win over the No. 7 South Carolina Gamecocks 5-1 at Swayze Field.

Hoglund went six innings on the mound and struck out nine batters while giving up just one run and not allowing a single walk. Derek Diamond and Taylor Broadway carried Ole Miss the rest of the way, giving up a combined one hit with eight Ks.

TJ McCants went 2-for-3 at the plate with an RBI while Kevin Graham and Hayden Leatherwood also recorded two hits, each going 2-for-5. Justin Bench led the Rebels with two RBI off of a hit that gave the Ole Miss pitching staff a cushion to work with down the stretch after a potent start.

Hoglund started things off breezing through the Gamecock lineup, including two early strikeouts while the Rebel offense immediately got to work. After a leadoff walk issued to Jacob Gonzalez, Graham hit a one-out single up the middle while Hayden Dunhurst’s RBI single through the right side gave Ole Miss an early 1-0 lead. A fielding error allowed Bench to reach on the following at-bat and loaded the bases, setting up McCants with a sac fly to go up 2-0.

Andrew Eyster got South Carolina on the base path for the first time with a leadoff single in the top of the second inning, but Hoglund responded in a big way with three consecutive strikeouts. Leatherwood followed that up with a leadoff double of his own, but all to no avail as Thomas Farr got out of the inning with no further damage.

After Hoglund recorded his seventh strikeout in the top of the fourth, the Rebels extended their lead in a bizarre series of events. Kemp Alderman reached despite striking out due to a wild pitch and also advanced to second due to a throwing error. Gonzalez brought Alderman home with an RBI single up the middle and gave their team a 3-0 lead.

The Rebels weren’t quite done, however. Another wild pitch and a pair of walks loaded the bases with no outs, setting up Bench with a chance to bust the game open. Bench delivered with a two-RBI single and gave Ole Miss a 5-0 lead going into the fifth inning. Hoglund continued to deal on the mound before the rest of his team had another chance to widen the lead, but Farr made it through not giving up a run.

Fast forward to the seventh inning, Diamond replaced Hoglund on the mound after six innings and nine strikeouts. On just his second pitch, Diamond gave up a solo shot by Josiah Slighter to right center field, putting South Carolina on the board. Diamond responded by striking out three of the next four batters. McCants hit a leadoff single and later found himself in scoring position after a wild pitch and fly out, but a strikeout of Alderman quashed that chance going into the eighth inning. After a quick inning, Broadway recorded the final three outs to come away with the Rebel win.

Due to inclement weather, the Rebels will finish up the weekend series tomorrow in a doubleheader with South Carolina. First pitch for the first matchup is set for 1:30 p.m. CT with the second game beginning at 6 p.m. CT or 50 minutes after the conclusion of Game 1. Both games can be heard on the Ole Miss Radio Network.

⁃ The Rebels advance to 29-12 overall, 11-8 in SEC play.
⁃ Ole Miss moves to 36-25 all-time against South Carolina.
⁃ Ole Miss notched its 10th win against a ranked opponent this season, including seven against top-10 teams.
⁃ Kevin Graham extended his on-base streak to 34 consecutive games and has reached base in 39 of 41 games this season.
⁃ Graham recorded his 16th multi-hit game this season, tying Justin Bench for a team-high.
⁃ TJ McCants has now reached base in 20 consecutive games and came away with his 13th career multi-hit game.
⁃ Gunnar Hoglund struck out nine batters for the seventh time this season
⁃ Hoglund didn’t allow a walk for the 12th time in his career.
⁃ Hoglund notched his third outing this season without allowing a run.
⁃ Ole Miss won the opening game of a series for the first time since taking Game 1 from Alabama on March 26 en route to a series sweep. The Rebels have swept both SEC series where they have won Game 1 this season.