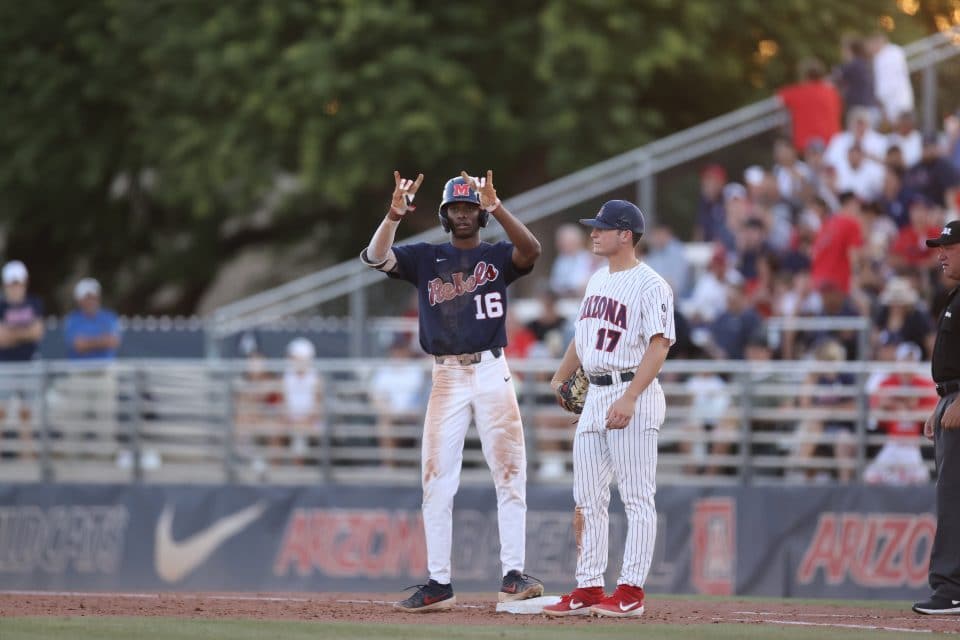 TUCSON, Ariz. – Ole Miss came out hot offensively with a three-run first inning, but the Arizona pitching staff kept the Rebels quiet from the second inning on and cruised to a 9-3 win to open the NCAA Tucson Super Regional.

TJ McCants led Ole Miss at the plate with a 2-for-4 day with two RBI, the only Rebel with multiple hits and RBI. On the mound, Derek Diamond allowed four runs on eight hits over four-plus innings, then the Wildcats touched reliever Tyler Myers for five runs over 3.2 innings.

Ole Miss started fast when Jacob Gonzalez roped the first pitch of the night down the right field line for a leadoff double. Soon after, Arizona elected to intentionally walk Tim Elko, and Justin Bench made them pay with another double to right. TJ McCants punctuated the three-run first inning with a two-RBI single to center.

Arizona was poised to respond with a crooked number of its own, starting with a leadoff solo home run by Donta Williams. Two Wildcats later reached base on a single and a walk, but Diamond induced a four-unassisted double play to escape the inning with the Rebels ahead 3-1.

The Wildcats added one more on a solo home run by Tony Bullard in the second, but Ole Miss maintained a 3-2 lead through two. After a scoreless third, Bullard struck again, knotting the game at three with his second solo shot.

Ole Miss was poised to regain the lead in the fifth, placing two runners on with nobody out after a Peyton Chatagnier single and a Kevin Graham walk—but Arizona escaped the jam and preserved the 3-3 tie.

Arizona claimed its first lead of the night in the fifth when Derek Diamond exited after yielding a leadoff single. Tyler Myers came on in relief and gave up the two-run, go-ahead home run to the first batter he faced, making it 5-3 through five.

Bullard continued to punish Rebel pitching in the sixth, driving triple to right center before coming home on an RBI groundout to stretch the lead to three.

The home team broke it open in the eighth, loading the bases with one out to set up a bases-clearing double by Williams.

Ole Miss and Arizona will do battle again on Saturday at 9 p.m. CT on ESPN2.

Quick Hits
– Ole Miss fell to 44-21 on the season.
– Arizona claimed the all-time series lead over Ole Miss at 2-1.
– Ole Miss fell to 61-52 all-time in the NCAA Tournament.
– Ole Miss has scored two or more runs in the first inning in each of the last four games.
– Kevin Graham extended his reached-base streak to 58 games, the longest in the nation this season. He has reached safely in 63 of 65 games this season.
– TJ McCants recorded his 20th multi-hit game of the season.
– Tyler Myers has walked one or fewer batters in every outing of his career, 44 consecutive outings.