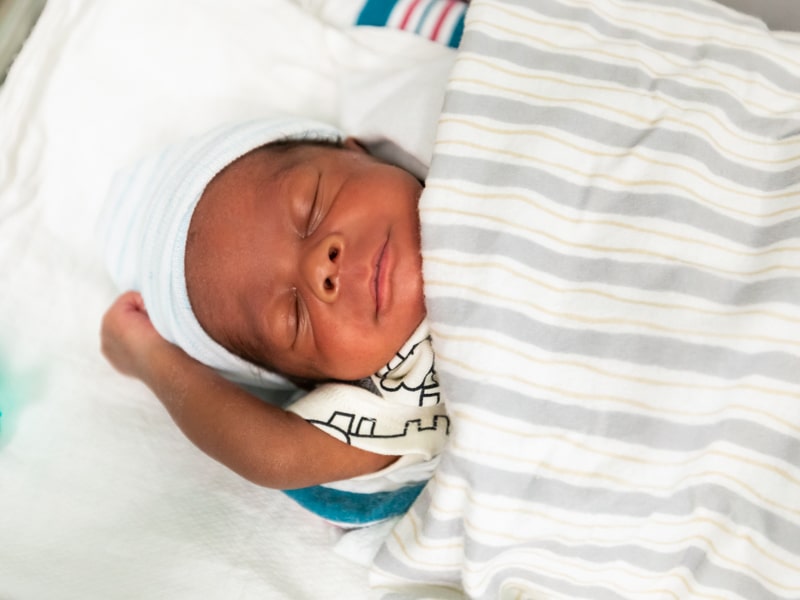 Image courtesy of the University of Mississippi Medical Center

Cessie Stringer is home rocking her newborn son thanks to the University of Mississippi Medical Center team who saved their lives.

The certified nursing assistant was taken to UMMC on September 24, 2020. The mother of two, 21 weeks pregnant with her third child, was in respiratory failure from COVID-19.

In the intensive care unit, Stringer was faced with the choice of a lifetime: whether to go on a ventilator.

After praying, Stringer said she made one request before being sedated for ventilation. “I said, ‘Don’t give up on me.’”

Stringer was in critical condition for weeks and was intubated for more than a month.

“She required blood pressure support to keep her alive, and countless medications,” said Dr. Rachael Morris, associate professor of obstetrics and gynecology and a member of Stringer’s medical team. “She developed kidney failure from COVID-19 and required dialysis for several weeks.”

Ultimately, a tracheostomy had to be performed in the intensive care unit by Dr. Anne Kane, assistant professor of otolaryngology, and her team.

After 47 days in the intensive care unit, Stringer was “incredibly deconditioned,” Morris said.

Stringer was moved from the ICU to Wiser Hospital for Women and Infants for pregnancy care and rehabilitation.

“There is a delicate balance with optimizing with maternal and fetal care, especially in a critical care setting,” Morris said. “When Cessie was admitted, there was no chance of fetal survival at 21 weeks. Our efforts were to save her life in hopes that we could save them both.”

At 32 weeks, doctors noticed the baby’s heart rate slowing, Morris said, “so we moved toward delivery by cesarean section.”

Throughout the pregnancy, Morris said, Stringer was determined to get well.

“Cessie’s one goal prior to delivery was to be able to walk again,” she said, “and she achieved that the week Harlem was delivered.”

Born about eight weeks early on Dec. 16, Harlem was taken to the neonatal intensive care area of the Kathy and Joe Sanderson Tower at Children’s of Mississippi to grow stronger.

His mother was doing the same. By Jan. 3, she was transferred to Methodist Rehabilitation Center for about a week of physical and occupational therapy to prepare her for life at home with her children.

“She is very motivated,” said Skylar Menist, an occupational therapist at Methodist. “She was already doing well when she arrived.”

Making sure Stringer is up to caring for Harlem as well as her 12-year-old son and 1-year-old daughter, Menist and Methodist physical therapist Veronica Taylor had her carrying a weighted baby doll and doing tasks ranging from walking to motions needed to prepare a meal, such as opening cabinets and kitchen appliances.

Morris said doctors are learning more about the ways COVID-19 can affect pregnancies. “We know that COVID is associated with increased rates of fetal growth restriction, miscarriage, stillbirth, preterm delivery, and pre-eclampsia.”

Through her months at UMMC, “Cessie became like family to so many of us,” Morris said. “She has a smile that could light up a room, and she knows everyone’s name.”

Stringer’s medical team celebrated her progress toward getting well by throwing her a gender reveal celebration on December 1, 2020, as Harlem’s birth neared.

“She got admitted very early on in her pregnancy and never knew what she was having,” Morris said. “We kept it a secret and decided to organize a gender reveal for her in Wiser.”

Registered nurses Meredith Morris, Melissa Jayroe, and Julie Jones were among those planning the event.

“Cessie Smith is a true miracle,” Jayroe said. “She has shown us all what strength and determination can do for one’s body and soul.”

The nurses’ encouragement during Stringer’s stay, Dr. Morris said, “was the real medicine that kept her fighting after being in the hospital for months. That’s nothing you can find in a pill.”

The gender reveal was also a chance for Stringer’s medical team to celebrate the survival of Stringer and her baby.

“It was just good for the heart and soul to see them both thriving,” Dr. Morris said.

Stringer said she’s thankful for the care she’s received. “They never gave up on me and were beside me and Harlem through it all. I can’t thank them enough.”