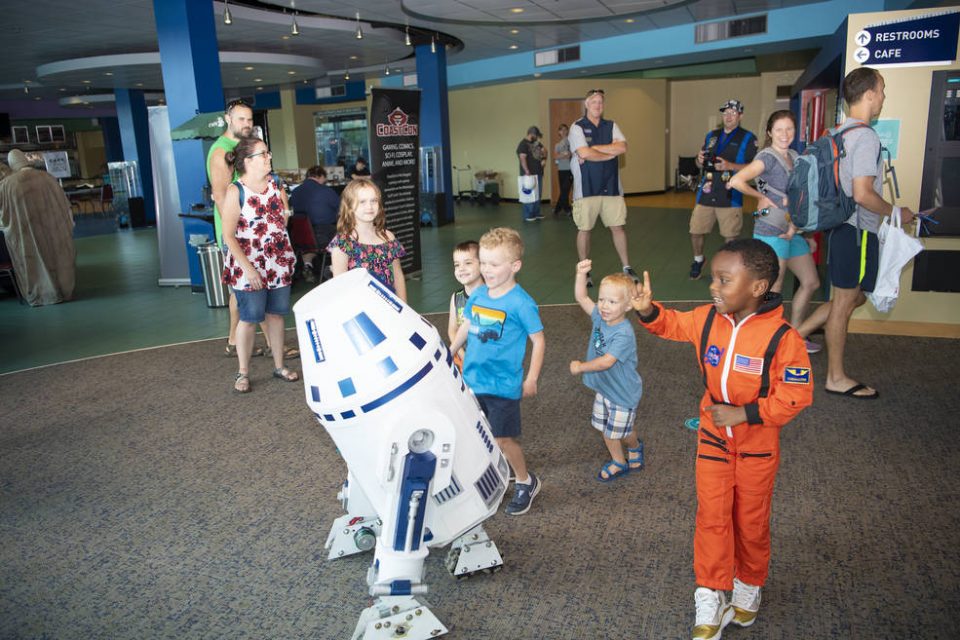 Nathanim Simpson (r), of Mobile, Alabama, gathers with others around a movie-accurate R2-D2, a popular droid character from the Star Wars franchise, at INIFINITY Science Center’s grand reopening May 29. Credits: NASA/SSC

INFINITY Science Center, the official visitors center of NASA’s Stennis Space Center, officially reopened its doors to the public for the first time May 29 following its temporary closing on Dec. 30, 2020, due to COVID 19.

During a daylong grand opening event, visitors were greeted by Stennis astronaut mascots Orbie and Starla; special Stars Wars guests, including Chewbacca and Darth Vader; the International Star Trek Fan Association; the Mandeville Robotics Team 2992; and others. They also had a chance to engage in various hands-on activities hosted by a team of Stennis visitor relations specialists.

By blending space, Earth science, engineering, and technology content to create a unique learning environment, INFINITY Science Center attracts guests from far and wide, all hoping to get a hands-on understanding of space.

Some end up at the site by chance. Robert Watson was traveling from Florida on vacation when he stumbled upon the center, which he considered a moment of luck. “This place is awesome,” he said. “The kids are enjoying it. I’ve had fun. Everything so far, so good, and we are going to the 3D theatre later, too.” Watson’s daughters, busy tie-dying plates next to him, said they hope to become a scientist and astronaut, respectively.

Entering the center, guests first encounter The Earth Gallery, which features such exhibits as the Inundation Station, the Sandbox, and Environmental Monitoring Stations. A Hurricane Prediction Lab offers guests a hands-on and up-close opportunity to learn about the key conditions that influence hurricanes. Visitors also can learn about the Gulf of Mexico, observing a variety of sea life at the Deep Ocean Explorer exhibit.

Following The Earth Gallery, guests are ready to travel back in time through the Space Gallery, featuring early space history and a progression of NASA exploration missions from the Apollo Program to construction of the new Space Launch System rocket designed to return humans to the Moon as part of the Artemis program and power eventual missions to Mars. In this gallery, visitors can see the advancement of technology in real-time, building excitement for future missions and technological advancements.

“I remember when I was growing up, they used to show every time the space shuttle would take off,” said Tiffany Brown, a member of the USS Neptune NNC-75013, the Biloxi-based Star Trek Fan Association. “They would show it in school, and I wanted so badly to be on the space shuttle. I’ve always had my head in the stars. It’s just amazing what’s out there.” Brown’s visits to INFINITY only amplify this excitement, allowing her to learn about the real science behind the science fiction world she fell in love with on as a child.

Located on the second floor of the center, Space Gallery exhibits feature a variety of items, including a small-scale Apollo command module next to the full-scale original Apollo 4 command module, which actually flew in the first “all-up” test of the Saturn V rocket in 1967. When surrounded by INFINITY’s simulators, artifacts, video theatres, and life-sized, walk-through mockup of the International Space Stations Destiny module, it is hard not to think of what the future may hold, which is exactly what 12-year-old William Wedgeworth likes to do at what he considers his self-proclaimed second home.

“I probably want to be an astrophysicist, and the INFINITY Science Center really helps inform me of all of the things I might need to know…”, he said. “I really enjoy doing the Astro Camp®, and it helps me collaborate with everybody else who likes doing the things that I want to do in my field. Birds of a feather.”

As the official visitor center, INFINITY aims to be the focal point for Earth and space science education and dialogue in the Gulf Coast area between New Orleans and Pensacola, Florida. The 72,000-square-foot facility displays over 50 years of NASA history and has helped educate K-12 students across five states since first opening in 2012. This year, INFINITY leaders hope to serve even more.

“In the immediate future, we are starting Astro Camp® sessions in two weeks, and we’ll continue to have large events, like this, usually at least once a month as well as special members-only benefits as well,” said Anne Peek, a resident of Mississippi and partner of the INFINITY Science Center. “We just want to keep doing what we do, and that’s to do science for folks and have fun.”

With the reopening, INFINITY staff members hope they are one step closer to getting back to normal, which entails sharing their knowledge and love of science with kids and adults alike.

INFINITY Science Center is open from 10 a.m. to 6 p.m. Thursday through Sunday. Individuals interested in registering for summer camp sessions may learn more at: https://www.visitinfinity.com/programs-events/summer-camps/.

Coach Nelly and The Official, Close Encounters of the Kiffin Kind