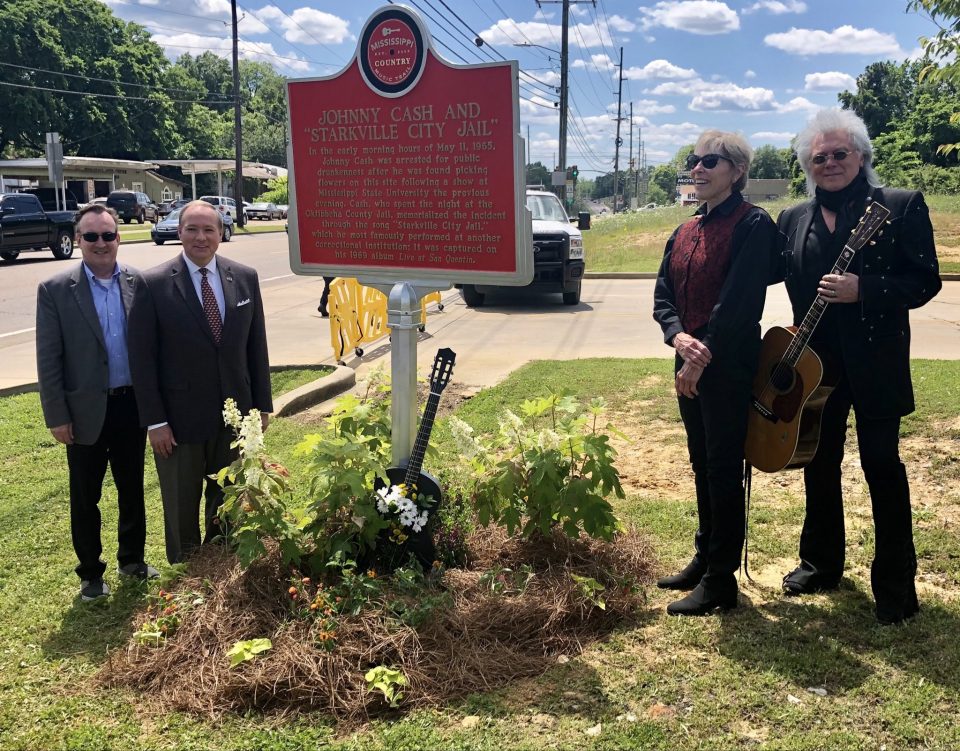 The latest marker on the Mississippi Country Music Trail commemorates the night that “The Man in Black” himself was booked in the Oktibbeha County Jail, which more famously became known as the Starkville City Jail, on May 11, 1965.

After wrapping us a show at Mississippi State, Johnny Cash was arrested for public drunkenness while picking flowers at what was a private residence at the time, and his arrest inspired the tune “Starkville City Jail” which he performed for the inmates at San Quentin Jail in 1969.

The 35th marker on the Mississippi Country Music Trail was unveiled Friday afternoon at the corner of Mississippi 182 and Jackson Street in Starkville—the spot where Cash was arrested.

“Johnny Cash is an iconic figure in American music, and made contributions in several different genres,” Governor Tate Reeves said. “This marker on the Country Music Trail is much deserved and illustrates his musical legacy. His time in Mississippi obviously was memorable, and we are proud to honor him with this marker.”

“I felt honored to live in a state that Johnny Cash had passed through,” Stuart said. “I still feel that way. I’m thrilled we can pay tribute to (him), as well as his colorful story, which will live on for generations to come, on one of the beautiful, historical trail markers.”

Cash is one of the best-selling artists of all time. He has sold 90 million records worldwide, including country, rock, blues, folk and gospel.

“We believe that memorializing his experience was part of what Johnny Cash believed was the beginning of his road to personal redemption,” Starkville Mayor Lynn Spruill said. “His career is one of great personal success and sharing of his personal tragedy inspiring hope in others through his music. We are glad to be graced with part of his music history. We are also happy to be able to share in this honor for someone who is iconic in country music.”

Group behind Initiative 65 says court overturned “will of the people”