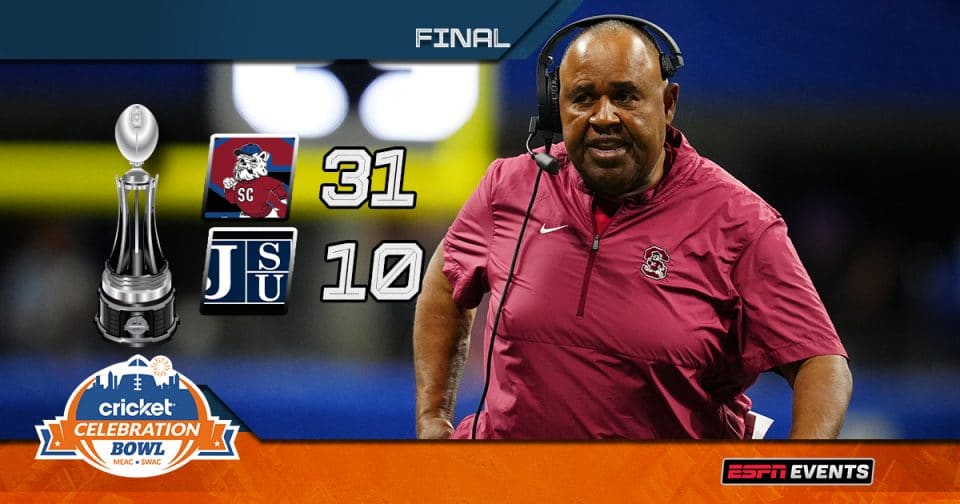 At halftime, South Carolina State head coach Buddy Pough said that he needs to get his quarterback, Corey Fields, to take a breather and calm down before going back on the field.

And that’s exactly what Pough must have done as his team outscored the Jackson State Tigers 21-3 in the second half to win the Cricket Celebration Bowl, a.k.a. the HBCU national title game.

The Tigers jumped out to an early 7-0 lead after Shedeur Sanders completed a seven-yard touchdown pass to Keith Corbin III.

Following the opening touchdown, both offenses were the epitome of arrhythmic until three minutes before halftime. That’s when South Carolina State, after one of many impressive punts from Dyson Roberts, forced a fumble on Jackson State’s seven-yard line with three minutes to go before halftime.

The Bulldogs didn’t take long to capitalize on the turnover with Fields connecting with Shaquan Davis for South Carolina State’s first touchdown of the game…and then, Davis decided to pull out Jackson State head coach Deion Sanders’ signature “Prime Time” dance while celebrating. Coach Prime even clapped for the opposing receiver.

Shaquan Davis reels in a TD and then hits THE PRIME! 😮 pic.twitter.com/GjYElBROje

The momentum completely shifted in favor of the Bulldogs during the ensuing kickoff when a defender viciously brought down Jackson State’s Aalah Brown in what looked like a classic WWE move.

South Carolina State quickly forced the Tigers to punt and was able to kick a 36-yard field goal with eight seconds remaining in the half.

From that point on, it was only downhill for Coach Prime and Jackson State. South Carolina State’s Fields would go on to throw for three second-half touchdowns, securing the university’s first Cricket Celebration Bowl win.

Sanders, who finished 16-of-36 for 175 yards, threw three interceptions in the loss. Going into the game, the second-team All-SWAC quarterback had just four interceptions.

Even amid the loss, it was a historic season for Jackson State (11-2) as the Tigers won the most games in a single season in program history.