A Hattiesburg man has been sentenced to serve 180 months in federal prison for being a felon in possession of multiple firearms and possessing firearms in furtherance of a drug trafficking crime, announced Acting U.S. Attorney Darren J. LaMarca and Special Agent in Charge Brad Byerley with the Drug Enforcement Administration (DEA).

Sternell Christopher Johnson, also known as “KayNine”, age 26, pled guilty on April 8, 2021 to possessing multiple firearms in furtherance of a drug trafficking crime after being a previously convicted felon.

According to court documents, on August 8, 2020, Johnson and others led the Lamar County Sheriff’s Office on a motor vehicle chase down Highway 98 in Hattiesburg before Johnson’s vehicle crashed and Johnson fled on foot.  Three firearms were recovered from the vehicle, as well as several large bags of marijuana weighing approximately 1.5 kilograms. 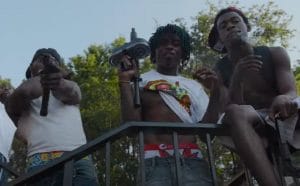 A review of Johnson’s social media accounts in the days leading up to the chase showed that Johnson was in possession of firearms from the vehicle as well as the marijuana.

“The Drug Enforcement Administration is proud to partner with the Lamar County Sheriff’s Office and the Hattiesburg Police Department to help combat the illicit narcotics activities and violent crimes occurring in the community.  The key to having a safe community is strong partnerships and interagency cooperation amongst all law enforcement agencies. I feel we have that in Hattiesburg,” stated DEA Assistant Special Agent in Charge Kevin J. Gaddy.

This case was prosecuted as part of the joint federal, state, and local Project Safe Neighborhoods (PSN) Program, the centerpiece of the Department of Justice’s violent crime reduction efforts. PSN is an evidence-based program proven to be effective at reducing violent crime. Through PSN, a broad spectrum of stakeholders work together to identify the most pressing violent crime problems in the community and develop comprehensive solutions to address them. As part of this strategy, PSN focuses enforcement efforts on the most violent offenders and partners with locally based prevention and reentry programs for lasting reductions in crime.