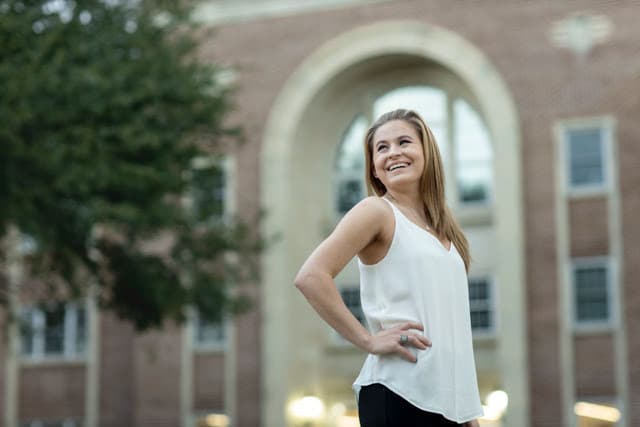 Miriam Berry is thrilled to play a small role in a Lifetime movie to be filmed at Mississippi College and downtown Clinton.

The Lifetime production is titled “Teacher’s Watching,” and it is among four film projects across the Magnolia State this winter.

A Brookhaven High grad and Copiah Lincoln Community College alumna, Berry signed up as an extra and plays a waitress. “I’m very excited for the opportunity as well as the skills I will learn from this experience.’’

Berry brings real-life experience to her movie role. She works part-time as a server at the 303 Jefferson restaurant in downtown Clinton. People with the cable TV movie discovered Miriam while the MC student served customers. They visited the popular eatery to shoot photos and asked if she wanted to be in the film.

Acting won’t be in her career plans. A criminal justice major and psychology minor, Berry hopes to join the FBI.

The Nenamoosha Social Tribe member is eager to meet actors on the movie set next week. The movie will also shoot scenes in Olde Town Clinton, Lion’s Club Park, and other areas of town.

Berry brings one other connection to the film industry.

Miriam is a former rider on the Mississippi College equestrian team. Her favorite horse – named Hale Bopp – was featured in a movie shot at Providence Hill Farm.

Filmed at the 2,000-acre farm in the summer of 2014, the movie was titled “A Gift Horse.” It told the story of a 10-year-old girl, Amanda, who struggles after the death of her mother. Her relationship with her beautiful white horse, Misty, played by “Boppie,” provides renewed hope and inspiration as she copes with the loss.

With its stables for 36 horses, wooded acres for clay shooting, and scenic lake, Providence Hill Farm was a perfect backdrop for the movie.

The same is true for the historic Mississippi College campus for the Lifetime movie. Some of the scenes at MC will be filmed at Alumni Gym starting January 27.

Other films have been shot at MC before, including the 2016 drama “Strange Weather,” starring award-winning actress Holly Hunter. Delighted to be part of the film was Spanish professor Beth Stapleton. Some scenes were shot at Stapleton’s Jennings Hall office.

Stapleton is a huge Holly Hunter fan. Both are Georgia natives. The movie told the story of a woman struggling to come to terms with her son’s suicide.

“It was amazing being behind the scenes in a movie,” says Stapleton, MC’s COVID-19 campus coordinator. “I enjoyed seeing scenes from Jennings Hall when the movie premiered as well. I will say, however, the life of an actor is not easy. We started the day at 7 a.m. and finished around midnight.”

Dr. Stapleton also serves as director of the McMillan Center for Education Abroad.

Mississippi College is getting commended for its involvement in the cinema business.

“Many thanks to MC for being supportive of the film industry,” says Nina Parikh, director of the Mississippi Film Office in Jackson. “And I hope your students have a great time working on the production as extras.”

Mississippi has stayed busy lately in film production. Movies “Teacher’s Watching” and “Adam the First” are in progress in metro Jackson. “Women of the Movement” a series for ABC, is in production in Greenwood and the surrounding Delta. The fifth season of HGTV’s “Home Town” is being filmed in Laurel.