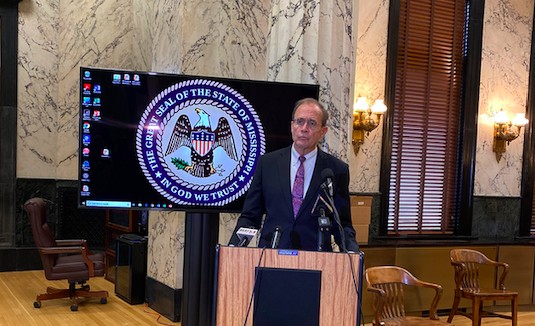 He started off this meeting by answering questions about the recent events and 13 deaths that have taken place in the state prisons since late December. Just the other day, Governor Tate Reeves has asked to close Unit 29 in Parchman, this is where many of the deaths occurred and the living conditions are not well.

“I think that’s appropriate and his action is well taken, clearly Mississippi is better than Unit 29,” Lt. Governor Delbert Hosemann said. “In addition to this, releasing prisoners back into society is really a four-step process.”

Hosemann went on to explain what the steps should be, “The first step is what the Governor and Commissioner Taylor are doing now which is to secure Parchman and make it safe for our inmates and guards and everyone who goes there. The second is to move those people to facilities that will ensure that safety continues. The third step is that we start a process of making sure that those inmates are educated, skilled, have the ability to get a driver’s license, an address and other so they start that process while they’re incarcerated to prepare them for coming out to the community.”

The closing date for Unit 29 at Parchman has not been set but Governor Reeves did say they are in the process of re-evaluating inmates and getting them placed properly.

Speaker Gunn Stops by the SuperTalk Studio – The JT Show