An ongoing lawsuit involving the Department of Child Protection Services could result in a federal takeover of the department, and a new report from a federal judge has detailed shortcomings within the department.

In 2008, as a result of the ‘Olivia Y’ lawsuit, which claimed that CPS failed to adequately protect the children in their custody, the department was ordered to meet 113 requirements to improve oversight and overall care by 2018. U.S. District Judge Tom Lee is presiding over the case, and a progress report that he filed this week states that Mississippi met just 37 of those requirements. 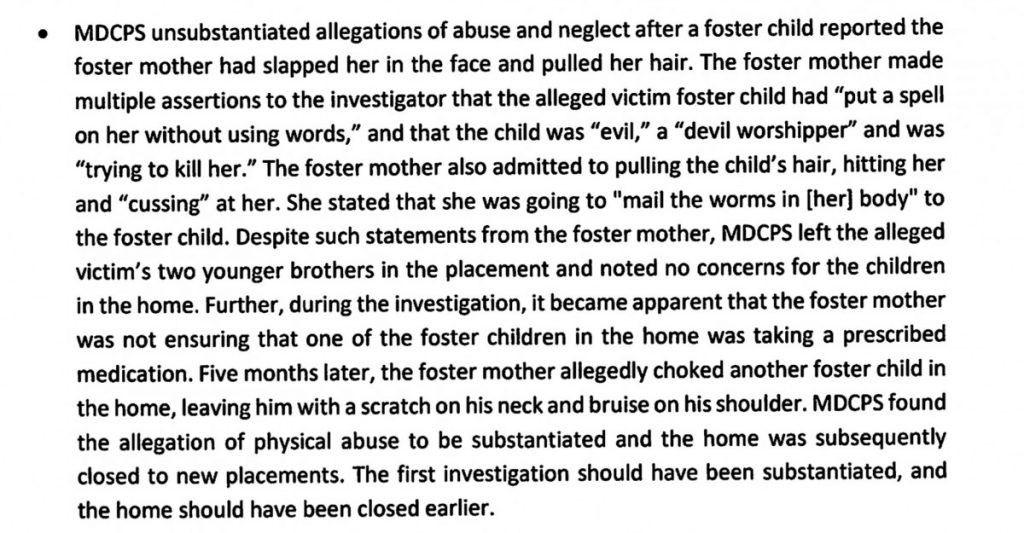 ‘A Better Childhood’ filed the original lawsuit in 2004, and after the report was released, the organization said that CPS is moving in the wrong direction.

“What this report tells us is that the state of Mississippi has essentially abandoned its foster children,” said Marcia Robinson Lowry, executive director of A Better Childhood and co-lead counsel in Olivia Y. vs. Bryant. “We were optimistic about progress during 2015 and 2016, but since the new commissioner, Jess Dickinson, took office late in 2017, a very good management team has resigned and the state actually seems to be going backward.”

In their response, CPS explained that while they are making strides to improve, such as decreasing the caseload for workers and decreasing the number of children in their care by 20% since 2017, they need more time and more money to meet the requirements.

“MDCPS today is an entirely different and a significantly improved agency than it was when a federal lawsuit was first filed against the state of Mississippi in 2004,” said Commissioner Jess Dickinson, who was appointed by Gov. Phil Bryant in September 2017 as the agency’s second commissioner. “We have a clear mission and we have an expanded and highly trained team who works every day to protect the children of Mississippi. We are not where we want to be, obviously, but so much has been accomplished.”

During the 2019 legislative session, CPS requested a budget increase of $25 million but fell $10 million short of what they asked for, receiving $15 million.

“MDCPS plans to use these additional funds to hire more caseworkers and supervisors and to replace its 25-year-old computer/information system with a comprehensive child welfare information system, as required by the settlement agreement. These additional funds will not be available until July 1, 2019, so the improvements MDCPS plans to make with them are obviously not reflected in the 2018 Court Monitor’s report.”

Other improvements outlined in CPS’ response are the qualifications of new staff members, extensive training, the number of new non-relative foster homes and improvements to post-adoption services.

Governor Bryant released the following statement in regards to the new report.

”Any case of child abuse or neglect is reprehensible in my eyes and requires immediate attention. We have made tremendous strides in recent years improving Mississippi’s child protective services, but we will not rest until it’s the best in the nation. Our children deserve nothing less, and I will continue to fight for changes and resources that will make a positive difference in our foster care system.”

According to ‘A Better Childhood’, now that the report has been received, the parties can file motions requesting leave to supplement the pending contempt motion, which seeks the appointment of a receiver to take over Mississippi’s foster care system.

CPS’ full response can be seen below:

Mississippi’s lead child welfare agency has made significant improvement in its efforts to protect the state’s at-risk, abused and neglected children and their families – but acknowledges it needs more time and money to accomplish all that must be done to satisfy the measures of the settlement agreement in the longstanding Olivia Y litigation.

The Mississippi Department of Child Protection Services (MDCPS) has, over the past 18 months, reduced the number of children in state custody by 20 percent from a high of more than 6,100 children in mid-2017 to around 4,700 today. The reduction of children in foster care is primarily because the agency has concentrated on accelerating each step in the adoption process and has instituted program to ensure children can be safely reunified with their birth parents. MDCPS also is providing strong support services to at-risk families making removal of children into foster care unnecessary. MDCPS has doubled the number of finalized adoptions from 302 in fiscal year 2017 to 647 in fiscal year 2018 and is on track to exceed 700 finalized adoption in the fiscal year ending June 30, 2019.

Although MDCPS has not yet met the court’s requirement that at least 90% of its individual caseworkers meet a maximum caseload cap, the agency has drastically reduced the number of cases assigned to frontline workers and supervisors. When the federal lawsuit was filed against the agency in 2004, it was not uncommon for workers in many counties to have caseloads of more than 200. Today, the statewide average is around 14 cases per worker.

The agency now inspects and licenses all active foster homes including relative placements before placing children in the homes, provides adequate board payments to support foster parents’ care of children in their custody, has more than doubled the number of finalized adoptions of foster children and extensively trains and equips roughly 1,000 frontline workers and supervisors. The agency, which was once a division of the Mississippi Department of Human Services, was established by the 2016 Legislature as a separate agency headed by a commissioner answerable directly to the Governor.

“MDCPS today is an entirely different and a significantly improved agency than it was when a federal lawsuit was first filed against the state of Mississippi in 2004,” said Commissioner Jess Dickinson, who was appointed by Gov. Phil Bryant in September 2017 as the agency’s second commissioner. “We have a clear mission and we have an expanded and highly trained team who works every day to protect the children of Mississippi. We are not where we want to be, obviously, but so much has been accomplished.”

Under Dickinson’s leadership, the agency has reorganized its management staff and field operations structure, hired additional caseworkers and supervisors, improved and expanded its pre-service and on-the-job staff training program, developed intensive in-home prevention services programs and stepped up its casework review and quality control processes. MDCPS has also instituted measures to reduce caseworker turnover from a 29% attrition rate in 2017 to less than 21 percent in 2018. The national average for social workers leaving their current employment because of job stressors and other reasons is 30%.

“When we arrived at MDCPS in September 2017, we discovered the agency was on a path to suffer a deficit exceeding $50 million. Over the past 18 months, we have overcome that deficit and put the agency on a sound fiscal basis and a path to success. Much good is about to bear fruit in terms of greatly improved services to children.”

According to a court monitor’s report filed today in U.S. District Court, however, MDCPS has yet to meet almost two-thirds of specific performance measures set forth in a federal court agreement stemming from the Olivia Y class action lawsuit filed in 2004 by Marcia Lowry on behalf of Mississippi’s foster care population.

According to the detailed review of the agency’s performance on 113 commitments during the 2018 calendar year, MDCPS only met required performance measures 37 times and did not do so in at least 35 other areas.  Public Catalyst, the court monitor appointed to review MDCPS performance and to provide a written report to U.S. District Judge Tom Lee every year, also said MDCPS did not provide data for an additional 18 commitments and the monitoring team could not validate data submitted by MDCPS for another 23 commitments.

Among the areas where MDCPS showed progress in 2018 are:

Training: During 2018, the MDCPS Office of Professional Development administered staff training and professional development to the workforce. MDCPS reported that the newly hired workers requiring training completed pre-service training during the period and workers hired into their positions late in the period were enrolled in training that ended in the first quarter of 2019. Additionally, all caseworkers and investigators received the required 20 or more in-service training hours and all supervisors received the required 12 or more in-service training hours during 2018. Finally, MDCPS provided information indicating that caseworker supervisors appointed in 2018 met the 90-day requirement for training completion.

New Non-relative Foster Homes: MDCPS licensed 431 new non-relative foster homes in 2018, exceeding the annual target of 400 homes established by the monitor after consultation with the Department.

Post-Adoption Services: MDCPS established a system of statewide post-adoptive services to stabilize and maintain adoptive placements. Adoptive families eligible for adoption subsidies have access to these services which include counseling, crisis intervention, family preservation and stabilization services and peer support.

Dickinson said improvement has been noteworthy even though the agency has not been funded at the level necessary to accomplish fully the requirements of the settlement agreement. During the 2019 Legislative Session, MDCPS requested a budget increase of more than $25 million and received an increase of approximately $15 million. MDCPS plans to use these additional funds to hire more caseworkers and supervisors and to replace its 25-year-old computer/information system with a comprehensive child welfare information system, as required by the settlement agreement. These additional funds will not be available until July 1, 2019, so the improvements MDCPS plans to make with them are obviously not reflected in the 2018 Court Monitor’s report.

“Much of the data concerns raised in the Public Catalyst report is directly related to our aging data collection and reporting system,” Dickinson said. “The caseload numbers and other requirements such as caseworker visits and recordkeeping go straight back to the fact that we have been unable – financially – to hire more workers and retain the ones we have. It all takes more money.”

He said the plaintiff’s assertion that MDCPS is unable to monitor the safety and status of the 4,700 foster children in state custody is untrue. Despite the data reporting challenges attributable to the agency’s aging data collection system, every child in MDCPS custody has an active case file in the system which is monitored regularly by a caseworker and immediate supervisor. Data is maintained statewide on every child involved with MDCPS either in custody or as an in-home protection case.

“Mississippi’s foster children are safe. As a class, their constitutional rights are not being violated as the original lawsuit alleged in 2004,” Dickinson said, citing specific systemic improvements:

– Foster care homes are licensed and foster parents are trained, background checked and visited by caseworkers and licensure workers. Foster parents receive board payments to care for children placed with them. MDCPS has put into place every safeguard we can humanly and financially provide. MDCPS is recruiting, inspecting and licensing adequate numbers of new foster homes statewide on an annual basis.

– Children’s length of stay in foster care is being reduced – thanks to concentrated reunification efforts and rapid adoption review processes in partnership with the state court system. Reasonable efforts are a top priority – both for prevention of removal of children from their birth families and for reunification/adoption.

A trained workforce of frontline caseworkers and supervisors in each of Mississippi’s 82 counties is growing and retention is improving. Workers are highly trained in both pre-service and on-the-job training. A revised trauma-informed Practice Model Learning Cycle, a key effort to improve and upgrade all facets of child welfare practice, will be completed statewide in 2019 with every county and region involved. Ongoing coaching reinforces the initial seven-month-long training cycle.