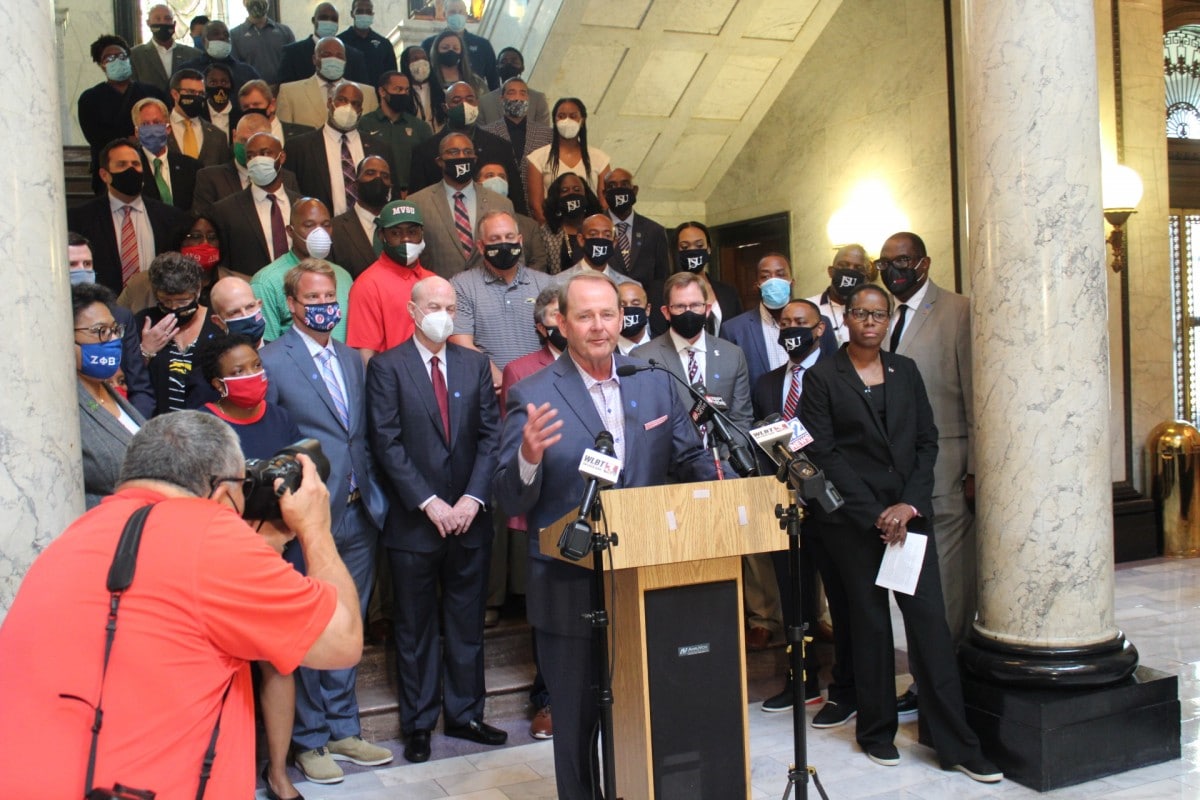 This morning, coaches and athletic directors from all eight of Mississippi’s public universities descended upon the Mississippi capitol building to unify behind the cause to change the state flag.

The group of nearly 50 representatives from the universities, joined by Speaker of the House Philip Gunn, stood shoulder-to-shoulder in the rotunda of the state capitol to call for the removal of the controversial Confederate battle emblem from the state flag. Ole Miss head basketball coach Kermit Davis and Mississippi State women’s basketball coach Nikki McCray-Penson spoke with purpose as they looked toward a future with a flag that brings Mississippi residents together.

The Mississippi native also spoke of the role of athletics in effecting positive change across the state and how a new flag would allow each university to achieve its full potential.

McCray discussed her own experience with the flag that “screams hate” and how universities can lead the way in fostering change.

Mississippi State head football coach Mike Leach is relatively new to the state and his take on the flag is very straight forward.

Ole Miss AD Keith Carter joined student-athletes and members of the athletic department in a recent ‘unity walk’ in Oxford, and he said that today was all about putting words into action.

“It’s so clear that this is about more than sports, Carter said. “Fortunately or unfortunately sometimes, sports is kind of the front door to a university or to a state, and we just felt like if we could lend our voice to that it would make a tangible action to some of the things we talked about.”

C-USA recently joined the NCAA and the SEC in banning postseason events from the state unless a change is made. The conference’s baseball tournament has been held in Mississippi 8 of the last 9 years and is set to return to Hattiesburg in 2022. USM baseball coach Scott Berry weighed in on what a new flag would mean for Mississippi.

“It’s a huge boost for our economy when we host those tournaments or if we’re able to host regionals, obviously that brings in a lot of dollars, but more importantly, it shows that Mississippi is a state that welcomes everybody and stands for everybody,” Berry said.

In addition to the press conference, the various groups met privately with lawmakers to discuss the effort to reach a 2/3 vote in both chambers to allow for the suspension of the rules, which would pave the way for a flag-changing vote. That bill could either decommission the current flag, place an initiative on the ballot, or adopt a new flag.

As it stands, it appears that the legislature is still short on the necessary votes. Governor Tate Reeves has continued to hold firm on his position that only a vote of the people should change the flag, but in a Facebook post late Wednesday, he acknowledged that a 2/3 vote would signify an inevitable outcome.

Today’s act of solidarity joins the message issued by countless state leaders and organizations who intend to help Mississippi move on from what they believe to be a divisive part of its past and present to create a better future.

City of Tupelo removes the state flag from municipal property

Rep. Ford joins JT in conversation about the flag