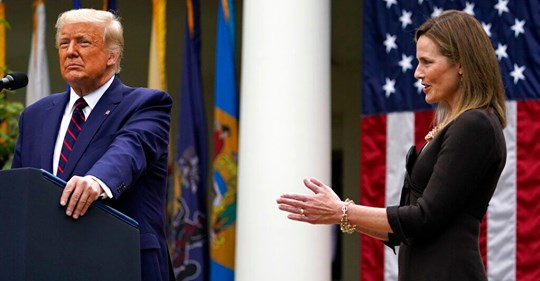 Mississippi’s delegation in D.C. is largely supportive of the President’s choice:

U.S. Senator Roger Wicker said, “Amy Coney Barrett is an outstanding judge and an even better person. A mother to seven children, she was subjected to unfair attacks on her religious faith and judicial philosophy during her previous confirmation process. Her grace under pressure and long-standing commitment to the rule of law indicates that she has the right temperament to serve on the Supreme Court and go through a highly-charged confirmation process. I commend President Trump on another exceptional pick for the high court, and I hope to meet with Judge Barrett soon.”

U.S. Senator Cindy Hyde-Smith stated, “President Trump has exercised his right to put forth a nominee to fill a Supreme Court vacancy.  In Judge Barrett, I believe President Trump has chosen a qualified conservative jurist who, if confirmed, will bring an important perspective to the Court.”

“I look forward to being part of her historic and important confirmation process, which will follow precedent and regular Senate order.  I take my constitutional ‘advice and consent’ responsibility very seriously, and I will carefully weigh Judge Barrett’s merits and qualifications and vote accordingly.  Filling a vacancy on the U.S. Supreme Court is a solemn process for our nation, and I hope Senate consideration of Judge Barrett will not descend into the dishonorable spectacle that Americans witnessed during the confirmation of Justice Brett Kavanaugh,” said Hyde-Smith.

Congressman Steven Palazzo said, “President Trump made a promise to the American people to uphold the Constitution, and just like he’s done for the last three and a half years, he will keep his promise. President Trump has made a great choice with the selection of Judge Amy Coney Barrett to be a Supreme Court Justice. I know she is a principled conservative who values faith, family, and freedom. I look forward to the Senate fulfilling its responsibility and filling the vacant seat with the fifth woman to serve on the Supreme Court.”

Congressman Michael Guest said, “Judge Amy Coney Barrett is respected for her strong faith and legal brilliance. I fully support her nomination and the efforts to confirm her as our next Supreme Court Justice.”

Congressman Trent Kelly stated, “Judge Amy Coney Barrett is an excellent choice by President Trump as a nominee to the U.S. Supreme Court. I look forward to a swift confirmation by the U.S. Senate.”

Congressman Bennie Thompson said, “Senate Republicans are going back on their word to achieve a conservative agenda that will strip away imperative rights for millions of Americans.  We do not need a Supreme Court that will dismantle health care, women’s rights, worker’s rights, and voting rights.  Senate Republicans should move with the same deliberate speed on addressing the coronavirus pandemic and delivering relief to Americans. Rather, they’ve made it clear to the American people that having a conservative Supreme Court nominee confirmed is more important than addressing the pandemic that has killed 200,000 people due to their leader’s lack of leadership.”

President Trump nominated Barrett to the U.S. Court of Appeals for the Seventh Circuit in May 2017.  She was confirmed by the Senate in October 2017.