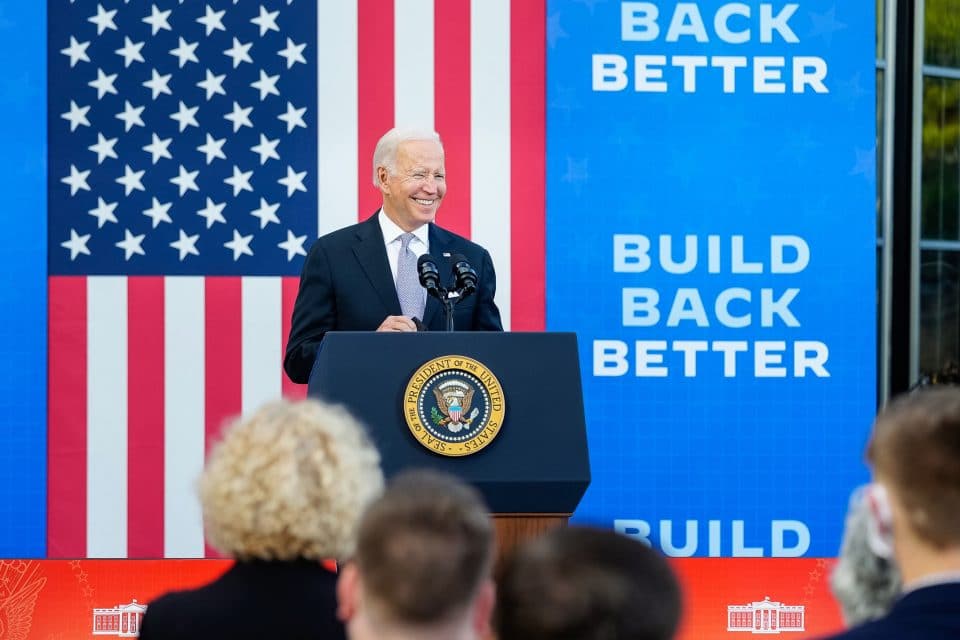 House Democrats passed President Biden’s landmark social and climate spending bill this morning.  Rep. Jared Golden of Maine was the only Democrat to vote no, and Build Back Better got zero Republican support.

The Senate won’t consider the bill until after Thanksgiving, and they’re expected to make changes.  Paid family leave could be removed, as well as a cap on state and local tax deductions.  Were that to happen, the bill would go back to the House for reconsideration.

Congressmen Steven Palazzo issued the following statement after voting no:

This Congress, President Biden’s Democrat party has repeatedly tried to mislead the American people with false math, fine print, and failed policy, and this bill is no different.

“Our nation is in crisis. Illegal immigrants are pouring through our southern border, our relationships with our allies are suffering, and our enemies are stronger than ever. Americans want and need solutions, not expensive socialist lies.

“Americans have time and again rejected the policies that Democrats loaded in this inflated legislation, including taxpayer-funded abortion, amnesty for illegal invaders, increased reliance on our enemies for energy, and a weaponized IRS that will increase taxes to spy on hard-working Americans. Mississippians deserve better than this half-baked socialist scam.

“The Congressional Budget Office, a nonpartisan analytic support tool for Congress, proved that this inflated bill would add over $300 BILLION to our national deficit over the next decade.

“As a CPA, I know the importance of a balanced budget. Churches, schools, businesses, and households all keep a balanced budget for a reason, and yet, Democrats continue to ignore or deny that they are digging a hole too deep for our economy to climb out of.

“Americans are already tightening their belts to pay for these socialist policies. Our nation cannot afford to continue this radical spending, and our Democracy will not tolerate these Build Back Broke policies,” said Congressman Palazzo.

Congressmen Michael Guest released a video last night prior to his no vote.  Read the full text of his speech below:

Since February, my Democratic colleagues have pursued a radical agenda, and their Progressive policies have created a new crisis each month.

And each month, Republicans have stood on the floor and warned over and over that if Democrats continue to push their agenda, the consequences will continue to stack up and fall on the middle class.

We stood on the house floor in February, warning that the radical policies imposed by the Biden Administration would create a border crisis.

Nine months later, we are still reeling from the border crisis the President created with his executive orders that ended important border security programs.

We stood on the house floor in March, warning that using the American Rescue Plan as an excuse to fund liberal priorities would do nothing to combat COVID-19, and the increased spending would drive up inflation.

Just last month, we hit a 40-year record on inflation that was caused by Democrat spending.

We stood on the House floor and warned that, by ending the construction of the Keystone XL Pipeline, thousands of Americans would lose their jobs and gas prices would skyrocket.

Today, many of those Americans employed by the pipeline are still out of work and gas prices have increased over 60 percent since last year.

Issue after issue, Republicans were proven to be right, but our colleagues across the aisle failed to listen, and the American people are paying the price.

Now we are warning about this huge liberal spending bill, President Biden’s Build Back Better Plan.

For months, Republicans have warned that the taxes would fall on middle income Americans.

Last week, even the left-leaning Tax Policy Center released analysis showing that this legislation would increase taxes for upwards of 30 percent of middle-class Americans.

Republicans warned that this bill would not pay for itself, and we have now learned that President Biden’s plan will not generate enough revenue to cover the cost of these expensive programs. Instead, it will pay 87,000 new IRS agents to spy on American bank accounts.

This bill will give mass amnesty to millions of illegal immigrants and make the border crisis worse, it will cause inflation to skyrocket to unsustainable levels, it will make our labor crisis worse by creating a welfare without work system, and it will strip pro-life provisions that have protected unborn life for decades.

We have been right over and over again about the terrible consequences of Progressive policies.

We are right about the Build Back Better plan.

“I could not be prouder that the House Democratic Majority came together today, with a sense of urgency, to deliver for the people and to tackle climate change and a wide-range of other challenges that put our communities at risk.

“I am particularly appreciative that the Build Back Better Act invests $1.5 billion in the Department of Homeland Security to provide crucial resources to three challenges confronting the Nation, including: cybersecurity, domestic terrorism and other threats to houses of worship, and reducing the Department of Homeland Security’s carbon footprint.

“The Homeland Security provisions of this bill provides $100 million in new funding for the Nonprofit Security Grant Program, which help DHS take necessary action to help secure churches, synagogues, mosques, and other nonprofits from domestic terrorism and other threats. It has been just three years since the deadliest attack on the Jewish community in U.S. history when 11 lives were lost in a mass shooting at the Tree of Life Synagogue in Pittsburgh, Pennsylvania. The funding the House provides today can help prevent such a tragedy from happening again.

“Finally, the Homeland Security title provides $900 million in strategic investments to help DHS reduce its carbon footprint and mitigate the ongoing effects of climate change that have a direct impact on our national security.

“I thank Chairman Yarmuth, my fellow committee chairs, and House Democratic leaders for their months of hard work to produce this once-in-a-generation legislation which includes so many important investments in our homeland security. I look forward to swift passage by the Senate so that it can be signed by President Biden and begin to improve the lives of our constituents across the country.”

In his Weekly Report from Congress, Senator Roger Wicker outlines the reasons he won’t be supporting BBB:

Eight months after triggering inflation with his $1.9 trillion stimulus bill, President Biden is now ordering up round two with his reckless tax-and-spending proposal. The 2,135-page proposal would raise taxes on millions of Americans, inject our economy with $200 billion of inflationary spending next year, and add $800 billion to the national debt by 2026. Although it is being advertised as costing $1.7 trillion, more honest estimates put the price tag near $4 trillion – two-thirds the size of the entire federal budget.

With inflation already at a 31-year high, more overspending is the last thing Congress should consider. Even prominent liberals are sounding the alarm. Moody’s Analytics, a group often cited by the President, predicts this bill would further drive up inflation next year. Steve Rattner, a former advisor to President Obama, recently said the Biden Administration “should come clean with voters about the impact of its spending plans on inflation.” Despite all this, Mr. Biden is insisting with a straight face that his bill would actually reduce inflation. Moderate Democrat Senator Joe Manchin gave a fitting response: “I’ll have to check on that one.”

President Biden has pledged not to raise taxes on the middle class, but that is exactly what his bill would do. Under his plan, nearly one-third of middle-class families would see a tax increase while most millionaires would actually get a tax cut. Meanwhile, the President’s bill would slap $1.2 trillion in new taxes on job creators. U.S. small business owners would pay the highest taxes in the developed world at over 57 percent. Some companies have already signaled that passage of this legislation would force them to cut investments in innovation, leading to fewer jobs and lower wages. No wonder small business groups are coming out in droves against this bill.

At a time when energy costs are already soaring, the President’s bill would drive up prices even further. His proposal would tax natural gas production while banning new oil and gas drilling off most of the U.S. coast – a recipe for higher gasoline and home heating costs. At the same time, the bill would use tax dollars to fund green energy companies to the tune of $320 billion. And it would subsidize the cost of high-end electric vehicles, which most middle-class families cannot afford.

It gets worse. The Biden proposal would strip away work requirements for welfare and the Child Tax Credit, upending 25 years of bipartisan consensus. This would discourage many Americans from finding work at a time when there are a record number of unfilled jobs. The Democrats have also included a paid leave mandate, which would put the federal government in charge of when and why employees can take leave. And their proposed federal takeover of child care would leave parents with less control over their own family decisions.

Speaker Nancy Pelosi once said, “Show me your budget, show me your values.” From top to bottom, the President’s reckless, big government bill does not reflect the values of America or Mississippi. It is hard to imagine a more harmful bill at a time when our economy is still recovering and inflation is through the roof. I am committed to seeing this bill defeated.

The United States House of Representatives passed the “Build Back Better Act” today, November 19, 2021. The act includes Medicaid expansion in Mississippi, through the use of the Affordable Care Act (ACA) Federal Marketplace.

The bill has many more hurdles to clear, including passage by the Senate and the President’s signature.  If passed, the act would affect over 750,000 individuals in Mississippi.

I have been in contact with the state division of Medicaid and will work with the Director and the Federal Center for Medicaid and Medicare Services to comply with the proposed law.

While I do not agree with many provisions of the act, I will work within the parameters of the new law.