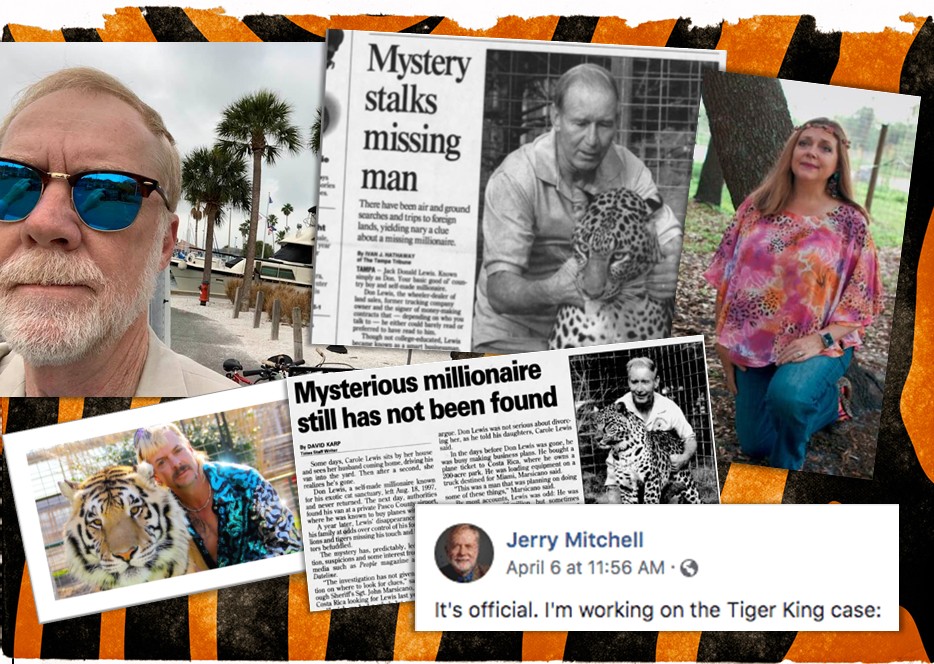 Where is Don Lewis?

That is the question that people around the world—including Jerry Mitchell—have been asking ever since the popular series Tiger King hit the screen.

The longtime investigative journalist from Mississippi was watching episode three of the Netflix show when he decided to delve into the unsolved disappearance of Carole Baskin’s multimillionaire husband, Don Lewis.

“Episode three says, ‘you don’t solve 23-year-old cold cases,’ and I thought, ‘well actually, they can be solved,’” Mitchell recalled an interview on Friday. “I took it as a challenge and decided to dive into this.”

In the show, Baskin claims her husband was a satyromaniac who often made trips to Costa Rica in order to cheat on her, and one day in August of 2001, he just up and disappeared. Lewis’ car was later found at a small airport with the keys sitting in the floorboard.

While it may be true that Lewis was having an affair, or multiple, Mitchell, who is currently in Tampa Bay investigating the mystery, does not believe Lewis’ disappearance had anything to do with an aerial accident like his attorney suggested.

“I do think it’s pretty rank speculation, unless you have some type of evidence to what transpired,” Mitchell said. “Thrown out of an airplane is a little tough. You’ve got to have a particular airplane that has a cargo bay or something like that. My dad is a pilot, so I know when you’re flying, it’s not like you can open the door and throw a body out.”

No matter the cause of disappearance, Mitchell thinks money was the motivator.

Lewis was worth about $10 million at the time of his disappearance, and every single penny of his estate went to Baskin. After taking a look at the will and power of attorney, Mitchell hired a handwriting expert.

“I gave the document to a handwriting expert here in Florida, and he basically said every single signature on those two documents is traced,” Mitchell explained. “The model signature for Don Lewis’ hand signature on both the will and the power of attorney appears to be from his marriage certificate. It matched identically.”

Mitchell noted that it is virtually impossible to write the same signature twice, providing “circumstantial evidence” that the signatures on the two documents giving Baskin all of Lewis’ money were forged.

Thus far, Mitchell’s investigation has led him to believe foul play was definitely a part of Lewis’ disappearance.

If anybody is going to solve the mystery of Don Lewis, Jerry Mitchell has a good shot at it as his previous works have led to the imprisonment of four Ku Klux Klan members, as well as one serial killer.

Inauguration Recap: President Trump looks to the future with vision of America first