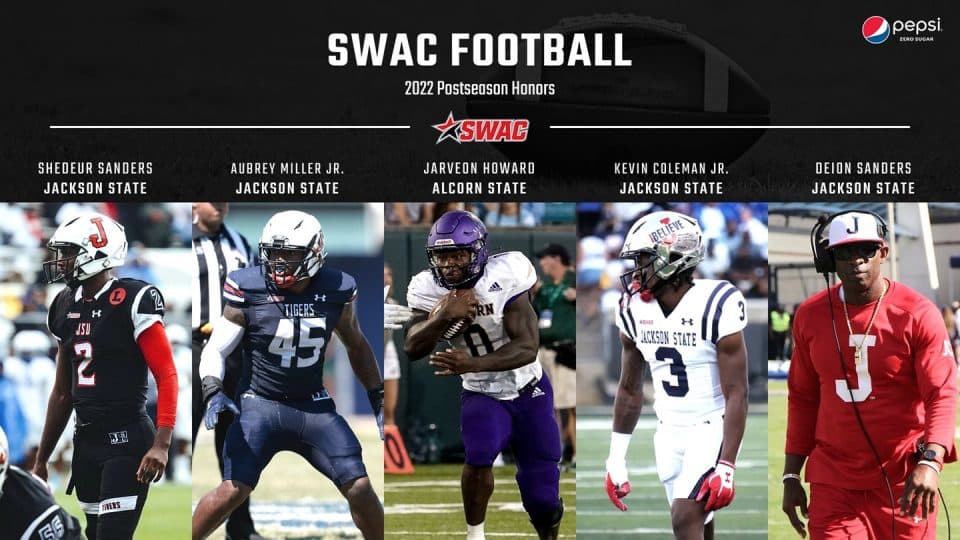 The Southwestern Athletic Conference has announced its postseason awards with representation from Mississippi leading the way.

Deion Sanders – who recently announced his decision to accept the Colorado job – was voted top coach in the conference for the second straight year after guiding the Tigers to a perfect 11-0 regular season record and the program’s 19th SWAC championship.

Shedeur Sanders, also Colorado-bound, is the first Tiger to be named Offensive Player of the Year since Casey Therriault accomplished the feat in 2010. Sanders’ award comes after the sophomore finished a record-breaking regular season with 3,083 passing yards and 37 touchdowns with just six interceptions.

Miller, following in the footsteps of former teammate James Houston IV, was named Defensive Player of the Year after totaling 98 tackles (53 solo), one sack, three forced fumbles, two fumble recoveries, five pass breakups, and one touchdown during the regular season. The senior linebacker had eight games with more than 10 tackles, including a 19-tackle performance against Texas Southern on Nov. 5.

Coleman, recruited as a 4-star out of St. Louis, was awarded Freshman of the Year honors after catching 24 passes for 324 yards and one touchdown. The all-purpose player also averaged 25.3 yards on nine kickoff returns and 8.7 yards on six punt returns.

Howard, a transfer from Syracuse, finished his senior season as the SWAC’s top rusher with 1,270 yards and 12 touchdowns on the ground. The Columbia, Miss. Native had five games of over 100 yards, including a 299-yard performance against Arkansas-Pine Bluff on Sept. 24.