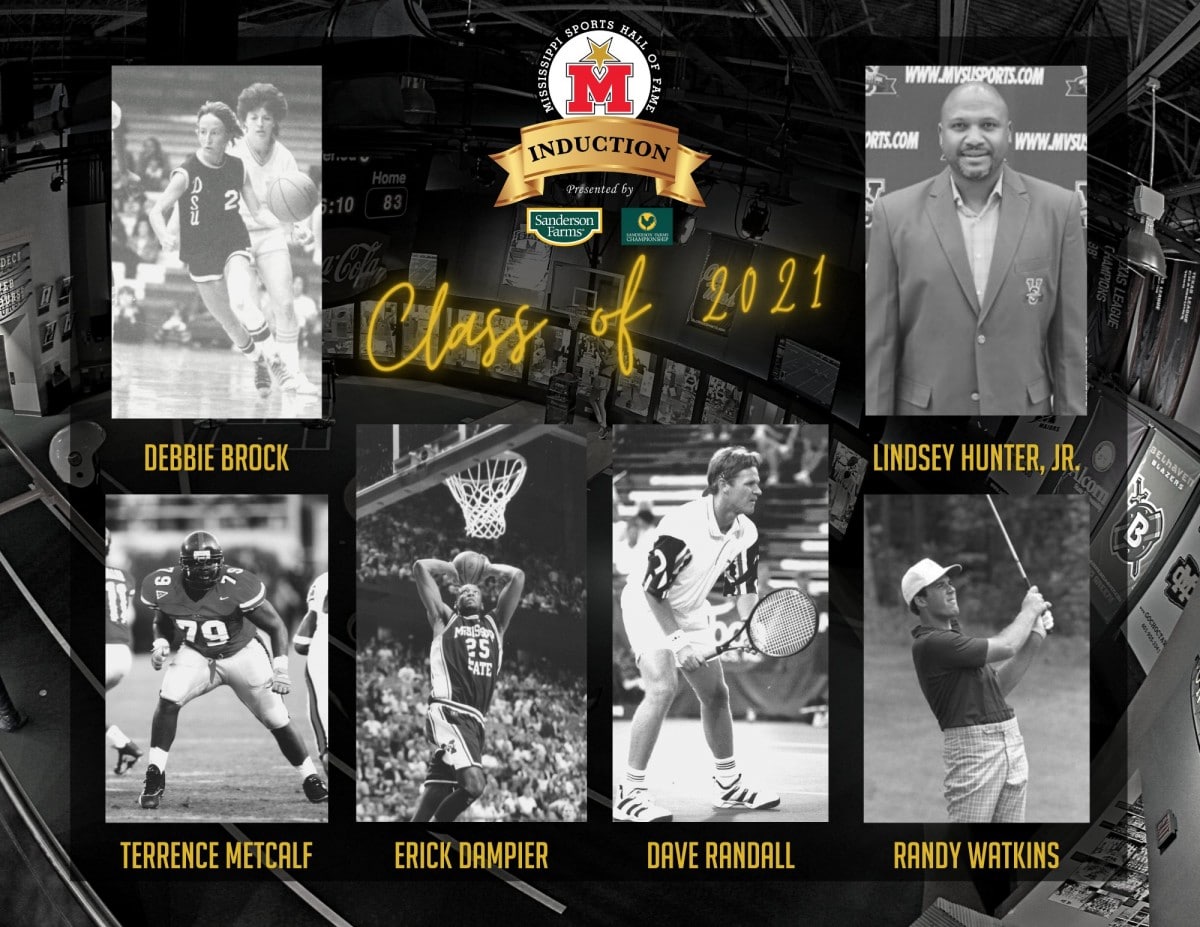 The Mississippi Sports Hall of Fame and Museum has announced its 2021 class consisting of six inductees— three basketball greats, a football star, a tennis player and a golfer.

“We are very proud to introduce our Class of 2021. This group will stand the test of time with the other great classes that represent the State of Mississippi,” Bill Blackwell, Executive Director of the Hall of Fame and Museum, said. “Entrance into this Hall of Fame is very difficult to achieve, and to have representation from tennis, golf and women’s basketball is gratifying. We welcome this class and hope we will soon be able to celebrate with a proper induction.”

Due to COVID-19 concerns, no date for the celebration has been set.

The Hall of Fame included a bio for each of its newest inductees.

Debbie Brock: Jackson native and Forest Hills graduate, Brock was the floor general for the Lady Statesmen women’s team that captured three consecutive AIAW National Championships. An all-state player in high school when she was coached by her father, Debbie chose to attend Delta State to play for Coach Margaret Wade. During her four years in Cleveland, the team record was 120 wins and only 9 losses and those three National titles. She was named on several All-American teams and voted Best Defensive Player for four straight years. Her jersey number 22 has been retired and she is a member of the Delta State Athletic Hall of Fame and the Women’s College Basketball Hall of Fame.

Erick Dampier: Erick played high school basketball at Lawrence County in Monticello, MS where he led the team to two straight state championships. Highly recruited, Mississippi State won his services.  In three years at State, he led the team to an SEC Championship and an NCAA Final Four appearance under Coach Richard Williams. The Bulldogs made appearances in the postseason each of his years in Starkville. Erick was the 10th player selected in the NBA draft and enjoyed a 16-year career in the league.  During his career, he played in Indianapolis, San Francisco, Dallas, Miami and Atlanta. Overall he played in 987 games, scored 7,309 points, grabbed over 7,000 rebounds and blocked 1,398 shots.

Lindsey Hunter: Jackson’s Murrah High School won two State Championships while Lindsey Hunter teamed with James Robinson under the guidance of Hall of Fame Coach, Orsmond Jordan in the 1980s. Lindsey played one year at Alcorn State under Davey Whitney before transferring to Jackson State.  Hunter’s game blossomed at JSU where he averaged over 20 PPG, dished out 440 assists and made 257 steals over his three years on Lynch Street. He won a SWAC Player of the Year honor and when he left he was the second all-time scorer in school history. A first-round draft pick in 1993 Hunter played in the NBA for 17 seasons. He totaled 937 games, 7,956 points and handed out 2,506 assists. His teams made the playoffs in 12 of the 17 seasons.  Since retiring as a player he has coached in the NBA as an interim Head

Coach and as an assistant, been an assistant college coach and currently is the Head Coach at Mississippi Valley State University.

Terrence Metcalf: Clarksdale, Mississippi is where Terrence Metcalf grew up. In high school, he played both on offense and defense. He was good enough to be rated as one of the top linemen in the country.  He made several All-state and All-American teams and then chose to attend Ole Miss. He was a starter almost immediately with the Rebels going 8-4 and getting a bowl bid. Three games into his second season he suffered an ankle injury that ended the season but gave him a medical redshirt. He was named to All-Conference and All-American by several groups each year and was selected to the Senior Bowl. The Chicago Bears took Metcalf in the third round of the 2002 draft and he played for nine seasons, making one Super Bowl a 29-17 loss to the Colts. He has coached at several levels including time at the Community College level. He has been selected as an SEC Legend and to the Ole Miss Athletic Hall of Fame. His son D.K. Metcalf currently is in the NFL with Seattle.

Dave Randall: Born in Memphis, Dave Randall grew up in Tupelo, MS. He may be the most accomplished tennis player in Mississippi history.  In high school, he was a three-time state champion. He won a doubles title and two singles crowns. Twice he qualified for the Boys Nationals in Kalamazoo, MI.  Collegiately he attended Ole Miss and became one of their first All-Americans and twice was named All-SEC. He captured three SEC titles in doubles and singles during his career. He led Ole Miss to the school’s first NCAA Tournament bid. From 1988 to 1999 Randall played on the Association of Tennis Professionals Tour (ATP Tour). Over his career he had doubles wins over 30 top-ranked players in the world. He became the first Mississippian to win a draw match at Wimbledon beating Russian Andrei Cherkasov in the opening round in 1993. Dave was a three-time winner of doubles titles and an eight-time finalist. He is currently the Head Tennis Professional at the River Hills Club in Jackson and is a member of the Ole Miss Athletic Hall of Fame and the Mississippi Tennis Hall of Fame.

Randy Watkins: Currently a teaching professional and course owner and manager, Randy Watkins has been involved in Mississippi golf since the 1970s. At the age of 15, he captured the 1977 National Junior Golf Championship. He attended Manhattan Academy for his high school and was a two-time All-American Prep Golfer. In 1979 he was a member of the PGA Junior Ryder Cup Team and was selected the PGA Junior Amateur that same year. While he played as a junior he won 20 different tournaments. After turning down offers from some of the top golf programs in the country, Randy went to Ole Miss. Named a team MVP, by his junior year he was named Mississippi Golfer of the Year by the Clarion-Ledger. His round of 65 in the Mississippi Intercollegiate remains one of the lowest rounds in school history. He was selected All-SEC and All-American and was Medalist in three tournaments his senior year. The Country Club of Jackson held Randy Watkins Day to honor him. He spent one season competing on the PGA Tour after qualifying at Q-School. His highest finish was 8th place at the Miller High Life Quad City Open. He owns and operates three clubs in the Jackson metro area and is very active supporting Junior Golf in this state.