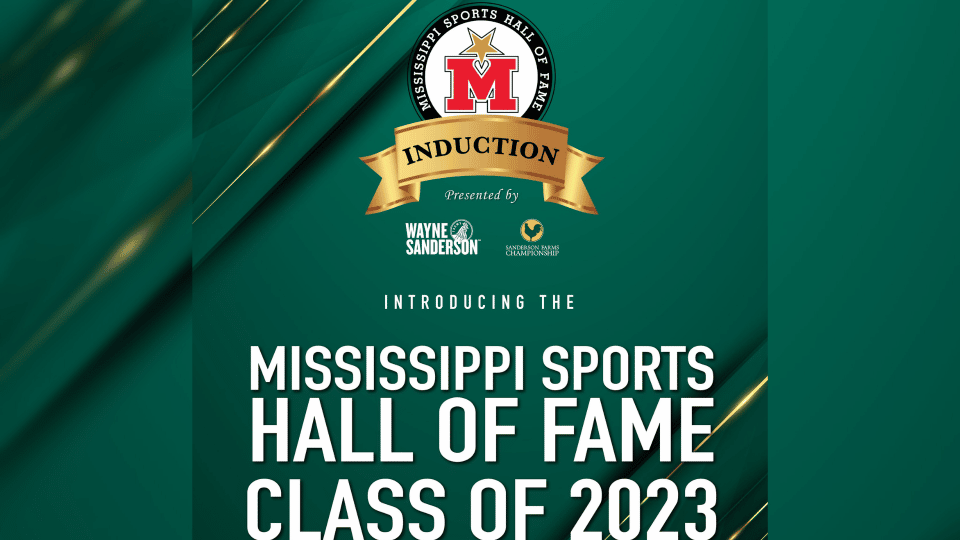 The Mississippi Sports Hall of Fame has introduced eight new members to its 2023 class.

Herrod holds the Ole Miss single-game total for tackles (28) and the single-season total for tackles (168). He finished as the school’s all-time leader in tackles with 528. He was named both All-SEC and All-American before playing 11 years in the NFL (10 with the Indianapolis Colts and one with the Philadelphia Eagles). Herrod led the Colts in tackles for seven seasons, finishing as the franchise’s all-time leader in tackles with 1,347. He was named Defensive Player of the Year three times (1989, 1990, and 1992). The Colts named him their MVP in 1991. In 1998, he received the prestigious NFL Ed Block Courage Award from the Colts for overcoming adversity on and off the field. In 1993, he was selected as member of the Ole Miss Team of the Century.

Maholm, a Holly Springs native, turned down an opportunity with the Minnesota Twins to play for the legendary Ron Polk at Mississippi State. The left-handed pitcher Maholm ranks fourth all-time in strikeouts (273), as well as innings pitched (312) at MSU. He is also tied as the school’s fifth-winningest pitcher, tallying 27 wins in 46 appearances. Maholm led his team in wins and strikeouts all three of his seasons in Starkville. His stellar collegiate career caught the attention of the Pittsburgh Pirates, as the organization drafted him with the eighth overall pick in the 2013 MLB Draft. Maholm pitched for four teams in 10 seasons in the MLB from 2005-2014, his best campaign coming in 2012 when he earned 13 wins and a 3.67 ERA with the Pirates and Chicago Cubs. His final MLB appearance came in August 2014 in a relief appearance for the Los Angeles Dodgers, his fourth team.

As the son of former Southern Miss and Boston Patriots legend John Mangum, Sr. as well as the brother of former Carolina Panthers tight end Kris Mangum and the father of former Mississippi Sate phenom Jake Mangum, John Mangum is an extension of an athletic family tree. The Magee native logged a record-holding 47 pass breakups as a defensive back at Alabama. Mangum moved on to the big league as a sixth-round draft pick for the Chicago Bears and played from 1990 until 1998. He finished his Bears career with 272 tackles, 4.5 sacks, 5 interceptions, and 2 forced fumbles.

The legendary Millsaps baseball coach has, thus far, amassed a career coaching record of 815-554-3. Page is the winningest coach in program history, which has sported teams on and off since 1908. Beginning his coaching tenure at Millsaps in 1989, Page sits 11th among active Division III coaches and 36th on the all-time Division III list in terms of wins. Across all Mississippi schools, Page ranks fifth-all time in collegiate wins.

Tony Rosetti competed at the 1972 Olympics while he was a student at the University of Mississippi. He did not start college until serving in the military, and he was deployed to Vietnam in 1966. Rosetti won a silver medal in skeet shooting at the 1971 Pan American Games. He was U.S. International Champion in 1969, 1971, and 1972. He won the National Skeet Shooting title, an aggregate of four gauges, in 1970 and 1972. Rosetti’s biggest international title came in winning the 1970 Grand Prix of Europe. In 1995, he was inducted into the National Skeet Shooting Association Hall of Fame.

The Oakland native played for the Ole Miss women’s basketball team from 1987-91 and only just beginning to leave her mark in Oxford. As a player, Ross assisted the Rebels to two National AIAW Regional Tournaments and was named to the first ever SEC All-Tournament team in 1980. Ross began her coaching career with stops at Belhaven and Auburn, before taking over as the head coach of the Florida Gators from 1990-2002. While in Gainesville, Ross was named the SEC Coach of the Year twice and took UF to eight NCAA Tournament appearances as well as the Elite Eight in 1997. She returned to her alma mater to become the head coach of the Rebels from 2003-2007. In her first season at the helm, Ross led the Rebels back to the NCAA Tournament in 2003 and guided the program to a legendary season in 2007 with its first 20-plus win season in more than a decade. The 2006-07 Rebels advanced to the Elite Eight and produced first-round WNBA Draft pick Armintie Price. The WNBA came calling in 2009, with Ross accepting a position as an assistant with the Atlanta Dream from 2009-11 before accepting the head coach of the Los Angeles Sparks from 2012-14. Her 2012 Sparks team reached the WNBA Playoffs and Ross ultimately named the league’s coach of the year.

Surtain, a 2011 Southern Miss Hall of Fame inductee, was selected No. 44 overall in the 1998 draft by the Miami Dolphins and played in 163 games in 11 seasons (seven with the Dolphins and four with the Chiefs). He was a three-time Pro Bowler, 2002 First-Team All-Pro, and 2003 Second-Team All-Pro honoree, finishing his NFL career with 547 tackles, 37 interceptions and 105 passes defended. Surtain finished his college career with 406 tackles, 46 tackles for losses, seven quarterback sacks and three interceptions. The New Orleans native was twice named First-Team All-Conference USA and was the league’s 1997 Defensive Player of the Year. He currently serves as head coach at American Heritage High School in Plantation, Florida and was named the 2020 High School Football America National Coach of the Year.

Tillman, a Hazlehurst native, laced up his cleats to play for Jackson State from 1985-1989. As a Tiger, Tillman broke Walter Payton’s career rushing record with nearly 3,989 yards and was named SWAC Player of the Year in 1987. The tough running back was drafted by the Giants in the fourth round in 1989 and spent five seasons in New York, earning a Super Bowl ring in 1991. Tillman ended his NFL career as a member of the Chicago Bears, with John Mangum as a teammate.