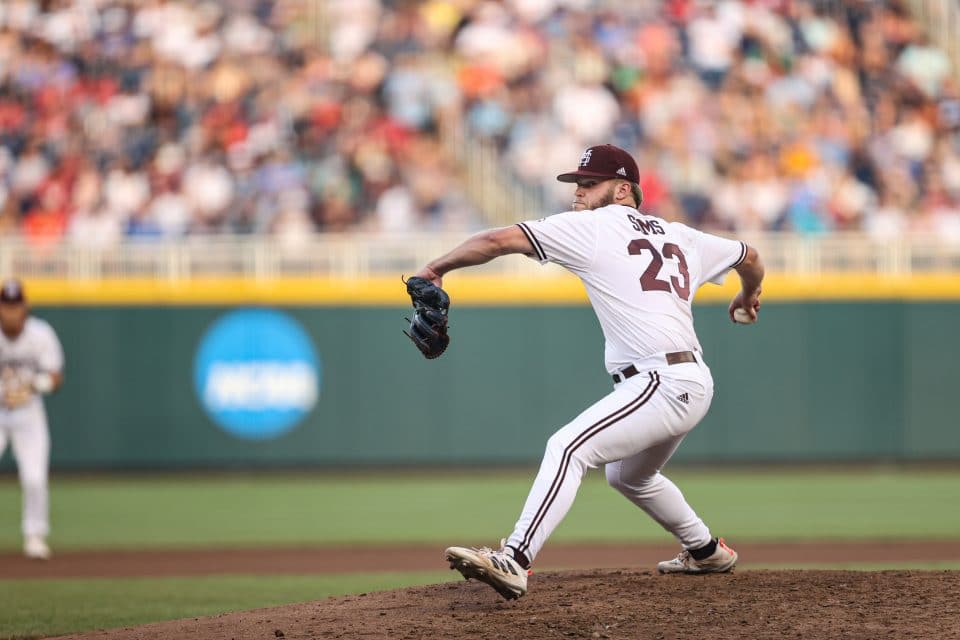 Mississippi State has had a propensity for drama this season, often leaving it to the final inning to find a way to win. Saturday night in a win or go home scenario, the Diamond Dawgs struck again, with the unlikely hero being Tanner Leggett. His walk-off hit drove in Brayland Skinner to put the Bulldogs into the final series of the College World Series with a 4-3 win over Texas.

State had to grind out the victory, trailing 2-0, and then 3-1, before tying the game in the sixth. The Bulldogs would load the bases with no outs in that frame, chasing Texas starter Tyler Matthews, but Longhorn reliever Cole Quintanilla would get out of the jam unscathed. State would take starter Will Bednar out in the top of the seventh after another quality start, bringing in Landon Sims for the final eight outs of the game.

In the bottom of the night, Kellum Clark would take first after a hit by pitch with one down. State would pinch run for him with Skinner, who took second on a 1-1 count. From there, Leggett would cement his place in Bulldog history, roping a line drive into left that brought Skinner home and set off a wild celebration at the plate.

State will play for a national title for the second time, taking on Vanderbilt, who advanced following an NCAA-declared no contest in their Saturday game against North Carolina State. Game 1 will be Monday, Game 2 Tuesday, and Game 3 Wednesday if necessary, first pitch at 6 PM for all three games.

No proof of vaccination needed for Saints games