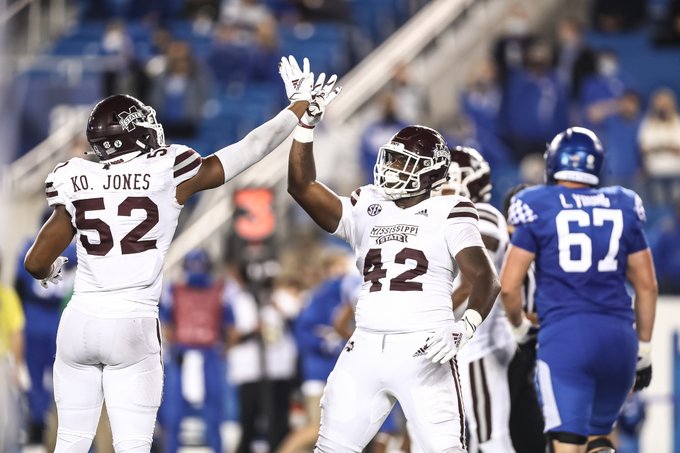 In Week 1, Mississippi State, Mike Leach, and KJ Costello were the toast of the college football world, as the university’s marketing department put out a video encouraging fans to jump on the Bulldog bandwagon. Two weeks later, the wheels are completely off, as State could only muster a safety via a bad Kentucky snap in a humbling 24-2 defeat.

State’s offense was completely ineffective, throwing a total of five interceptions, including a pick-six for a third straight week. The Bulldogs threw 70 passes, but for only 275 yards, while only rushing for 20 yards as a team. It was the first game in Leach’s coaching career that his team failed to score a touchdown. Defensively, State was effective once again, only giving up 157 yards of offense to the Wildcats, keeping a Kentucky offense that rushed for over 400 yards a week ago to only 84 yards. Kentucky QB Terry Wilson was 8-20 for 73 yards and a score.

FUMBLE! Caused and recovered by @_ASAPxDON.

Mississippi State falls to 1-2 on the season, and the offense that showed so much promise in week one has been flummoxed two weekends in a row. Even a quarterback change was ineffective, as Leach switched to true freshman Will Rogers in the third quarter. Rogers could do no more than Costello, going 9-15 for 43 yards and a pick. Kylin Hill had a total of 22 touches, but was only able to muster 96 yards. The Bulldogs will return to action next Saturday, taking on Texas A&M at home on a 3 PM kickoff.

Mississippi State Continues to Sputter in 24-2 Loss to Kentucky