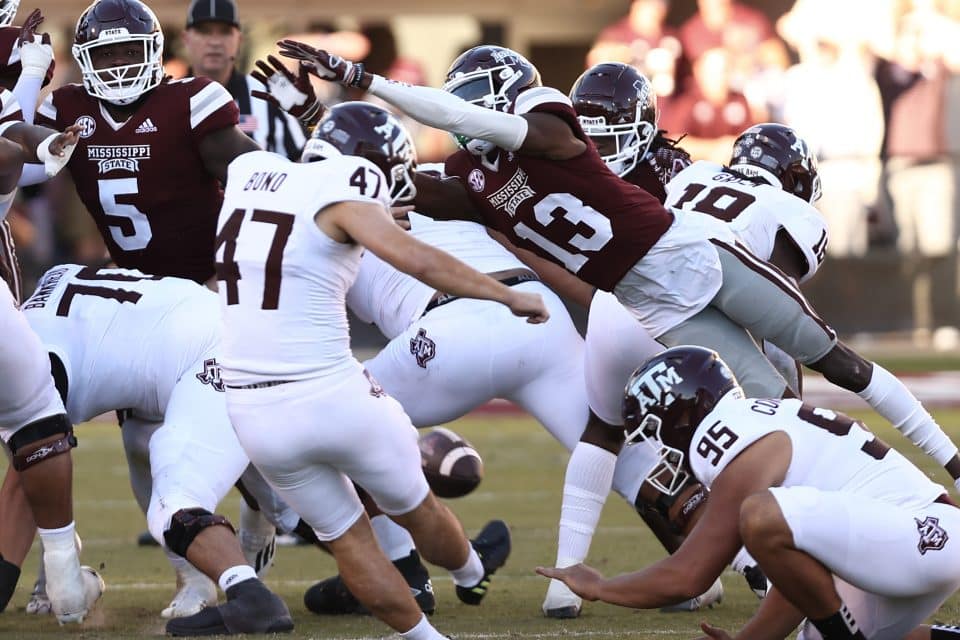 Mississippi State struck from the air, piled up yards on the ground, caused chaos on defense, and got a huge play on special teams in a totally dominant win over Texas A&M, 42-24. State’s Will Rogers threw for three scores, Emmanuel Forbes returned an interception for a touchdown and blocked a field goal that led to a 74-yard scoop and score by DeCamerion Richardson. The Bulldogs sacked A&M quarterbacks 4 times and forced 4 turnovers in what can be argued was the best win under Mike Leach at Mississippi State.

A&M had recovered a MSU fumble deep in Bulldog territory and were looking to make it a one score game, when Emmanuel Forbes made what he is known for, a big play. His block went spilling backwards, and his fellow cornerback DeCamerion Richardson grabbed it on the way to a 74 yard touchdown that put the Bulldogs firmly in control. Forbes had a huge day, adding two interceptions, one returned for a 33 yard score of his own. He will likely be the SEC Defensive Player of The Week.

The last two weeks have not been kind to Arkansas, who will likely exit the top 25 tomorrow. Now they head to Starkville for what could be the game that breaks their back. State has lost its last two to Arkansas, but the Bulldogs will obviously be playing with a lot of confidence. Kickoff is set for 11 AM.