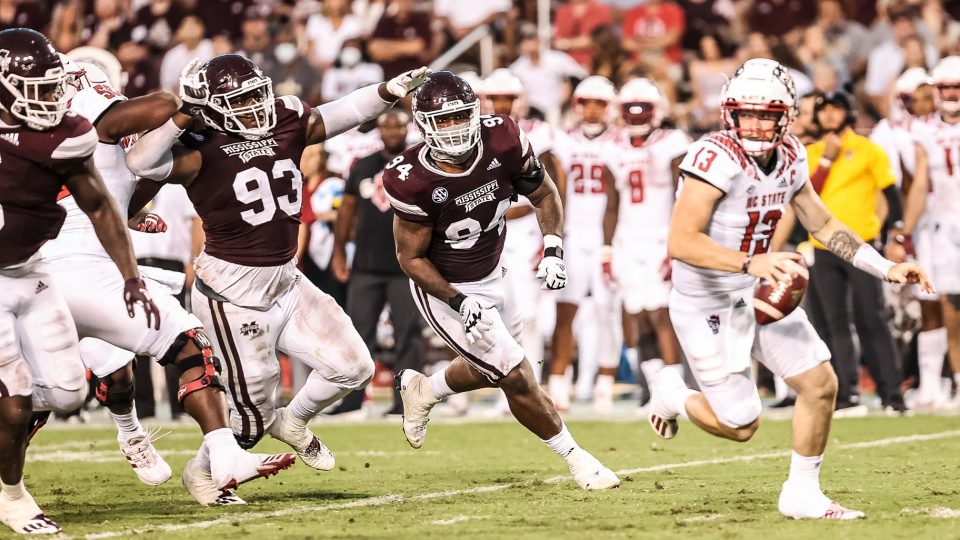 Once again, Mississippi State’s Air Raid offense didn’t quite light up the scoreboard, but Saturday night at Davis Wade Stadium, it had more than enough, as the Bulldog defense absolutely dominated North Carolina State in a 24-10 victory.

State held the Wolfpack 42 yards rushing, 251 yards less than they had accumlated a week before. In the passing game, Zach Arnett’s troops harrassed NC State quarterback Devin Leary all night, racking up five hurries and three sacks. State also forced three Wolfpack turnovers, and didn’t allow the visitors to cross the goal line until only a minute remained in the game.

Offensively, it was more of the same, as State struggled with consistency. Will Rogers completed 33 of 49 passes, but for only 294 yards. Rogers did throw for two touchdowns, and MSU played turnover free football. The rushing game, which showed so much improvement a week ago, reverted back to 2020 form, with Dillon Johnson and Jo’Quavious Marks combining for 12 carries and only 29 yards.

State started the game with an electric 100 yard kickoff return by Tulu Griffin that got the crowd of 45384 on its feet early. NC State would answer three possessions later with a field goal to cut the lead to 7-3, and that would be the final points for the Wolfpack until the game’s final minutes. Rogers would hit Malik Heath for a 21 yard score late in the second quarter to give the Bulldogs a 14-3 lead at halftime.

State would increase its lead in the third quarter on a seven play, 54 yard drive capped by a 4 yard pass to Jaden Walley. Nolan McCord, in for Brandon Ruiz, who didn’t appear on the field in the second half, would cap State’s night with a 32 yard field goal.

MSU improves to 2-0 on the season, they’ll head on the road next weekend to the Liberty Bowl for a showdown with their old rivals, the Memphis Tigers. Kickoff is set for 3 PM.