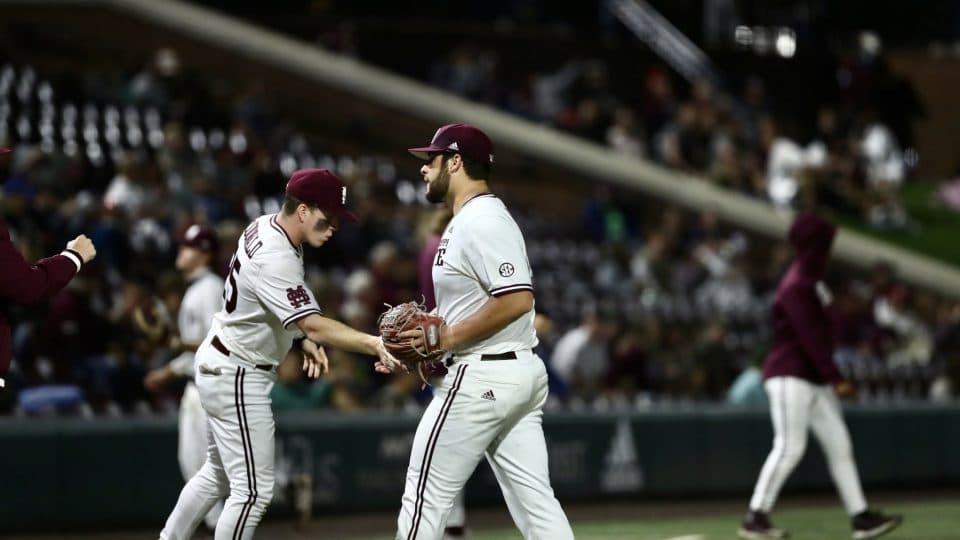 It was a pretty standard night for Mississippi State baseball, turning an early deficit into a late lead thanks to some good relief pitching and timely hits. Those factors added up to a 5-4 win over Missouri on Thursday night at Dudy Noble Field.

State got off to a sloppy start, with two errors in the first inning extending starter Christian MacLeod. MacLeod would only throw three innings on the night, giving up three runs on five hits and two walks. Brandon Smith took over and gave up one more run in the fifth, but from there, Preston Johnson and Landon Sims would combine for four innings of scoreless ball, striking out 10 between them.

State scored two runs in the first inning, but couldn’t get anything else going until the seventh, when a pair of infield hits sandwiched around a wild pitch and three walks put the Bulldogs on top. Scotty Dubrule gets credit for the game winning RBI when his bouncing ball up the middle scored Kam James and Luke Hancock.

State improves to 36-11 on the season, 17-8 in the SEC. The Bulldogs will get back in action tomorrow for Game 2 of the series, first pitch is set for 6:30 PM. Will Bednar will draw the start for MSU as they try to win the series.

Thunder & Lightning: Mississippi State Finds A Way Through Against Missouri