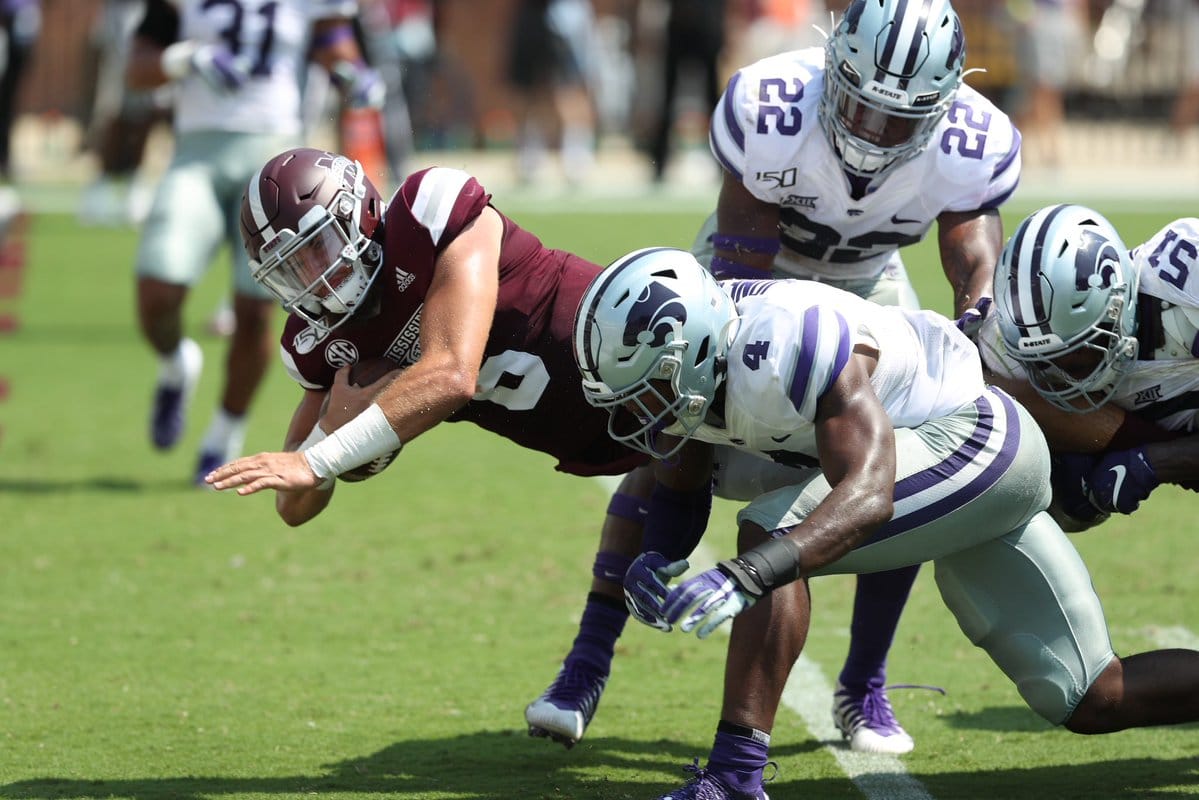 It was a complete game for Mississippi State, as issues on offense, defense, and in special teams all popped up as the Bulldogs dropped a 31-24 decision to Kansas State in Starkville on Saturday. Once again, the Bulldogs had to go to Garrett Shrader in relief of Tommy Stevens, but unlike last week against Southern Mississippi, the true freshman was unable to guide his team to victory. Kansas State overcame two fumbled punts to put together a fourth quarter comeback to move to 3-0 on the season. Mississippi State was stifled after taking a 24-17 lead, with the Wildcats immediately tying the game up on a 100 yard kickoff return, then scoring with just over 3 minutes to go to put the game away. State falls to 2-1 on the season, losing a regular season non-conference game for the first time under Joe Moorhead.

Osirus Mitchell continues to prove he can be an top tier SEC receiver. That catch put Mississippi State back into the game after a lethargic first half, his third touchdown of the season. He finished the day with 6 grabs for 74 yards, as he continues to provide flashes that he can be a go-to target in this league.

Not sure about that play call, 3rd and 2 and MSU throws it incomplete. Bulldogs have to punt it away.

No video, but this was where the game turned for me. MSU had it 3rd and 2 in a tie ball game, and rather than let Kylin Hill grind out a first down, he put the ball and essentially the game into his true freshman quarterback’s hands. It wasn’t the easiest day for Hill, who had to earn all 111 of his yards, but he’s the man on this team, that’s got to go through him. As it was, MSU punts the ball away and Kansas State drives down for the go-ahead score.

NOTHING SPECIAL ABOUT THESE TEAMS

Mississippi State’s Jace Christmann had just nailed a 47 yard field goal to push the advantage to seven points, and it looked like MSU was a defensive stop away from getting control of the game. Instead, Kansas State’s Malik Knowles goes end zone to end zone to put the momentum back on the Wildcat sideline. It has been a tough three games for Mississippi State’s special teams, and today was no different, as three Bulldog punts were tipped on top of this return. State evened out some of the damage with the fumble recoveries, but the sloppiness of this unit is hard to miss in the early going.

A season ago, Mississippi State’s season started its downturn in Lexington against Kentucky. Now the Bulldogs will welcome the Wildcats in what looks like a must win game for both squads. Kentucky bullied MSU in 2018 on both sides of the ball, State will have to be much sharper than they were against Kansas State if they want to get back on a winning track.