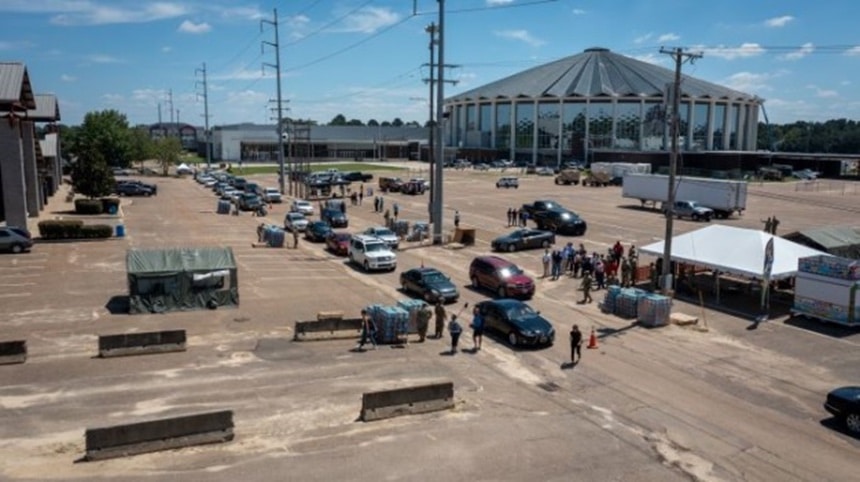 Photo courtesy of the MDAC

The Mississippi State Fairgrounds is serving as an emergency State Staging Area (SSA) and providing water from its well water system to assist with public water distribution efforts during Jackson’s water crisis.

The Fairgrounds is currently one of seven public drinking water distribution centers operated by the Mississippi Emergency Management Agency where bottled water and hand sanitizer will be distributed free of charge from 9:00 a.m. until 6:30 p.m. daily.

Additionally, the Fairgrounds is supplying water from its well water system to fill National Guard tanker trucks for distribution across Jackson and serving as a logistical hub for trailers with pallets of water to be distributed to the other six sites in the capital city.

“Our team completed the Fairgrounds water well system earlier this year with one our missions being to assist the public in times of emergency just like this. By utilizing the resources of the State Fairgrounds, we are assisting with the State’s water crisis response efforts in several ways, including the ability to provide well water from the Fairgrounds and to serve as a State Staging Area for public water distribution and logistics,” Commissioner of Agriculture and Commerce Andy Gipson said. “The Mississippi Department of Agriculture and Commerce and our Fairgrounds Division is ready, willing, and able to continue our efforts as we support the State’s emergency response team.”

Currently, only two previously scheduled events to take place at the Fairgrounds have been postponed: