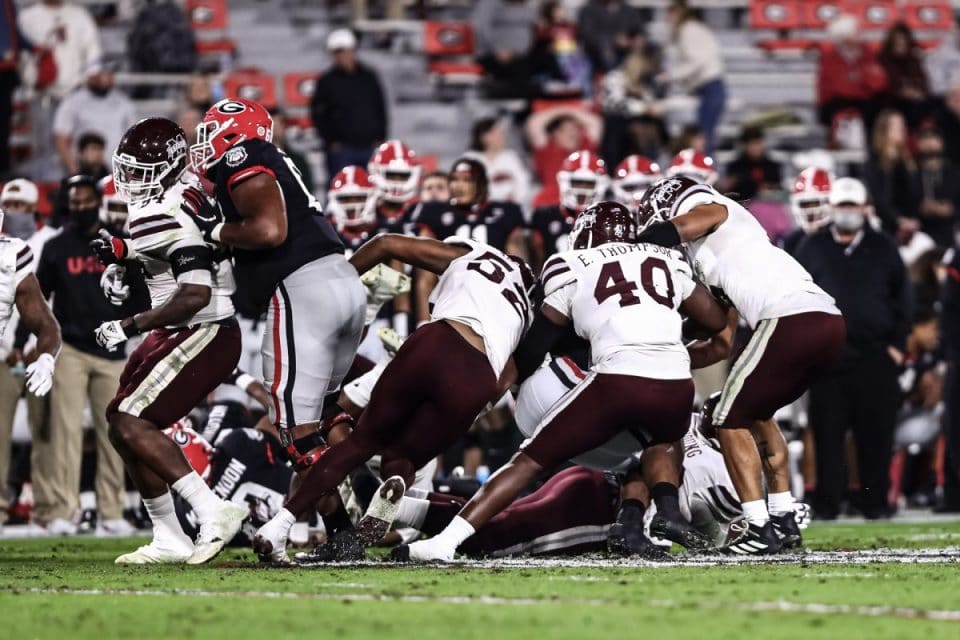 NCAA rules are clear, a team can have no more than 85 scholarship players at any time. Sometimes, injuries and defections might take a roster into the 70s, maybe even into the 60s. On Saturday, Mississippi State traveled to Georgia with 49 scholarship players on the field. It was a situation that could have easily seen the team crumble, instead, the Bulldogs traded haymakers with their Eastern counterparts until the end, falling 31-24 in Athens. State’s long-dormant offense finally found some life, as Will Rogers threw for 336 yards, and fellow freshman Dillon Johnson rushed for two touchdowns. It was not enough, as Georgia transfer quarterback JT Daniels showed why he was so highly coveted in high school, throwing for 401 yards and four scores, consistently finding big plays beyond the Bulldog’s decimated secondary.

Jaden Walley was the third true freshman to star for the Bulldogs between the hedges, hauling in 7 balls for 115 yards and a score. Johnson and senior Osirius Mitchell each had seven catches as well, as Rogers hit 10 different receivers. State’s offensive line, much maligned all season, held its own against the Georgia defense, only allowing two sacks, with the last one coming on State’s final play from scrimmage to ice the game.

State gets the ball back down 31-24 with 3:31 remaining in the game. #HailState🐶 pic.twitter.com/ljSv1XTX0M

State’s defensive gameplan was clear, stop the Georgia rushing attack at all costs. MSU was successful to that end, holding UGA to a mere 8 yards rushing on 23 carries. That plan left the back end vulnerable, as Georgia averaged 14 yards per reception, led by Jermaine Burton’s 197 yards in the air. State played turnover-free football for the second straight game, a huge improvement from the first 6 games of the year.

Mississippi State will presumably head to Oxford next Saturday in an attempt to retain the Golden Egg Trophy. State will need its position groups to remain relatively intact and should have some players come back from injury or COVID positives. Kickoff at Vaught-Hemingway Stadium is scheduled for 3 PM for the 117th matchup of the Magnolia State rivalry.