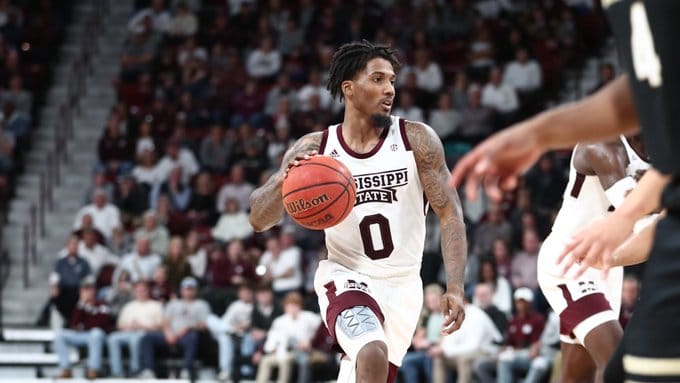 Mississippi State knows its tournament fate is likely sealed if the Bulldogs continue to win the games they are favored in. It might have been a little tougher than Ben Howland and his team would have liked, but the Bulldogs were able to hold off a tough Vanderbilt squad and grab an 80-70 win over the Commodores at the Humphrey Coliseum. State rode to victory behind 25 points from Reggie Perry and a season high 21 from Nick Weatherspoon, as those two combined for 44 points, 17 rebounds, and 9 assists. MSU improves to 15-8, 6-4 in the SEC, and most importantly, did not suffer a Quadrant 3 loss that would have been a big mark on their postseason resume.

Reggie Perry racking up a double double is certainly not news, as the Bulldog sophomore tallied his 13th such game of the season, but tonight might have been his best stat line of the year. On top of 25 points and 11 rebounds, Perry racked up 6 assists and 4 blocked shots, imposing his will on Vanderbilt on both ends of the floor. Vandy coach Jerry Stackhouse referred to Perry as the likely SEC Player of the Year, and State’s leading man showed mental toughness in bouncing back from sub-par midweek showing against Kentucky.

Nick Weatherspoon’s first half was certainly nothing to write home about, with only 4 points on the board. Weatherspoon led State’s charge from 4 down to 11 up in the opening minutes of the second half, finishing the night with a season high 21 points on 8-9 shooting. Weatherspoon’s resurgence has been a big part of State’s winning 6 of their last 7 SEC games, and on a night where Robert Woodard and DJ Stewart struggled to find their shot, it was Weatherspoon who took the team on his back offensively.

Make plans to be in Oxford on Tuesday night!

The most heated rivalry in the SEC takes to the hardwood on Tuesday, as MSU travels to Oxford for a match with Ole Miss. The Rebels are suddenly resurgent, getting back to back home wins this week. Tipoff is set for 6 PM on ESPNU.