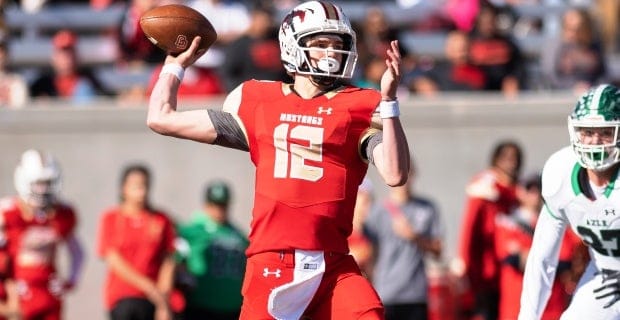 Mississippi State gets a pledge from highly rated signal caller

Mike Leach’s arrival in Starkville certainly signals a new day for the record book as far as the passing game goes, and with the knowledge that the ball will be flying all over the field, high profile quarterbacks seem likely to follow. Leach landed his top target on Tuesday night, as four star quarterback Sawyer Robertson of Lubbock, TX’s Coronado High School gave his pledge to Mississippi State.

Committed! Thanking God for Everything! pic.twitter.com/5djMNiBe7g

Robertson completed 63% of his passes as a junior for 3914 yards and 44 touchdowns against only 8 interceptions. He has followed Leach since he was a small child going back to the Air Raid offense’s days at Texas Tech. Robertson told Paul Jones of 247Sports “With me growing up in Lubbock (Texas) and knowing what Coach Leach did at Texas Tech, he has always been a legend to me.” Robertson is currently ranked as the #9 pro style quarterback in the 2021 class, and would be the highest rated quarterback to ever sign with the Bulldogs should he do so in December. He is the second quarterback commitment for the 2021 class, joining fellow Texan Daniel Greek of Argyle’s Liberty Christian High School. Leach’s first signing class is currently ranked 21st nationally by 247Sports.com.

Thunder & Lightning: What Will Mississippi State’s 2021 on the Diamond Look Like?