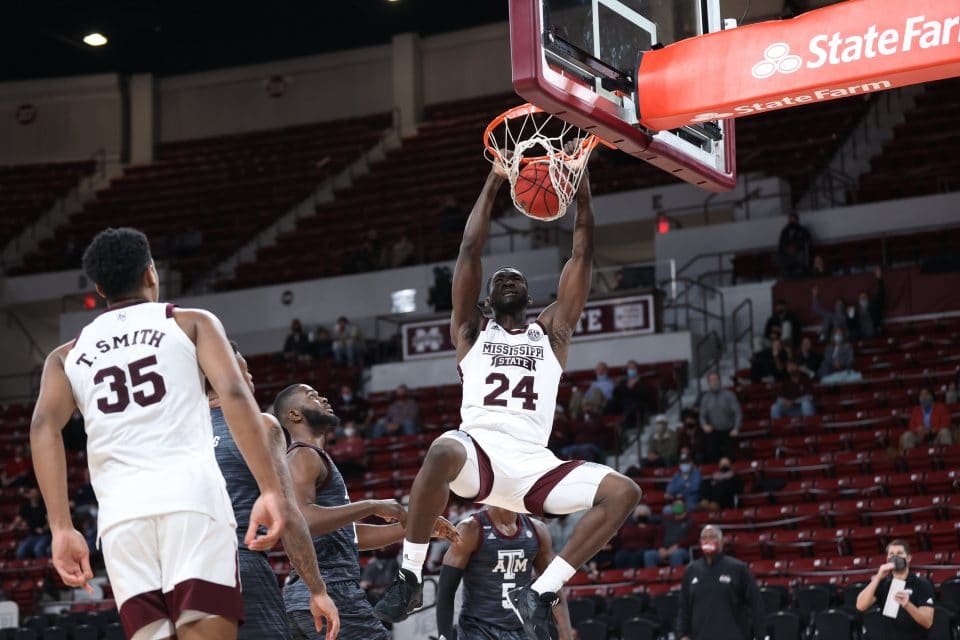 Mississippi State was probably feeling like it had weathered the storm when Tolu Smith’s putback attempt went through the net with 5:14 to go, as the Bulldogs had pushed their lead over Texas A&M to 50-44 after blowing a thirteen point advantage in the second half. Instead, the Aggies hit five of the final six shots to steal one in Starkville, taking a 56-55 win back to College Station.

The Bulldogs controlled most of the game, taking the lead at 12-10 and not relinquishing it until a 13-0 Aggie run made it 53-52 with 2:38 to go. Iverson Molinar had a tremendous first half, scoring 12 points, but was only 1-4 from the floor in the second period, finishing with 16 total. DJ Stewart endured one of his worst nights as a Bulldog, shooting 3-14 and turning it over 5 times, ending up in single digits with 9 points. A&M’s unconventional zone defense flummoxed the Bulldogs into 15 turnovers, which the Aggies turned into 19 points.

State had two late opportunites to regain the lead, first after a flagrant foul was called on A&M’s Johnathan Aku. Jalen Johnson missed the second free throw that would have tied the game, then MSU could get nothing on the ensuing possession. A&M’s final possession ended in a shot clock violation with 6.1 seconds to go, but again, State came up short, with Deivon Smith’s pass getting deflected and time expiring.

State falls to 8-5 on the season, 3-2 in conference play. Next up for Ben Howland’s squad, a match up at home with the Florida Gators, tip off is scheduled for 3 PM at the Humphrey Coliseum.

MSDH: “We have no additional vaccine” as appointments fill up